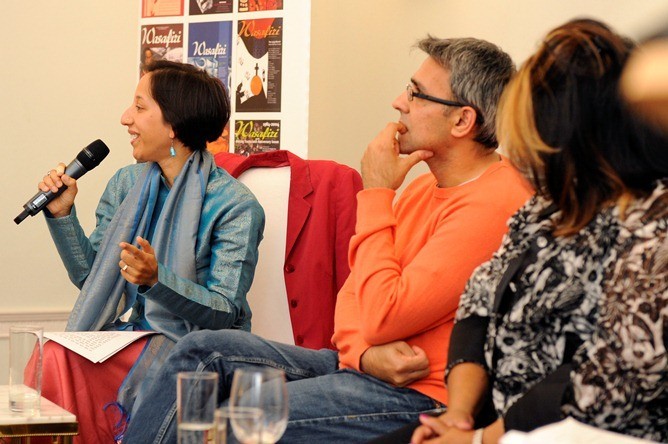 By Wasafiri Editor on October 3, 2012 in Articles 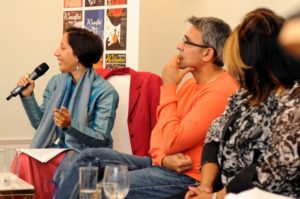 October 2012, to mark the launch of Wasafiri’s Special Issue, ‘Britain and India: Cross-Cultural Encounters’, guest-edited by Florian Stadtler, three writers came to together at Asia House in London, to reflect on the largely unacknowledged legacies of forgotten South Asian writers who were active in Britain in the early twentieth century. Contemporary writers Shyama Perera, Daljit Nagra and Bidisha chose excerpts from the Special Issue which, as a departure from our usual publications, cast a retrospective glance towards South Asian writers of yesterday. Each writer then offered their own original responses to these older works, excerpts of which are reproduced below with the generous permission of the authors. 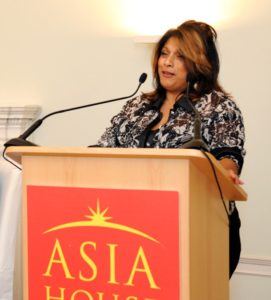 For Shyama Perera it was Cedric Dover’s poem ‘Brown Phoenix’ which stood out. Of mixed ancestry, Dover’s poem, published in 1950, pins its hopes on ‘tomorrow’s man/Offering to share/Love, and the difficult quest,/in the emerging plan’ and looks toward a future of diversity and racial inter-mingling. Reading Dover, Perera was reminded of her own feelings about the birth of her daughter which she described in a very personal account of being the mother of children of mixed heritage.

It’s been a long labour; my traumatized baby finally hauled from caul and womb.
A suction cap fitted to her scalp, she emerges in a whoosh with such force that her head is elongated for several days. A pixie. She is placed on my chest. I lift an arm and fix her in place, and we stare at each other with mutual bewilderment. Her hair is thick and black, but the body, which I’d imagined as a royal gold, Cedric Dover’s ‘golden bird’, is the white of a blank page. No instinctive connection, more instinctive contention. Her father lifts her from me; cradles her; kisses her. “Welcome to the world, Little One.” She is as white as the sheet in which she’s wrapped. The obstetrician comes in. I say, “If I hadn’t seen you pull her out of me with my own eyes, I’d bring a maternity suit claiming this baby isn’t mine.” I reach out for her; hold her for the first time and look at her properly; this child as white as a vicar’s collar, as Dulux gloss, a field of snow. I say: “I realise now, that you can love a baby, just for being a baby. It doesn’t have to be yours.” What I acknowledge in that moment, though I don’t realise its import for many years, is that this child who I already love enough to both kill and die for, is an alien to me. She is genetically unknowable. The midwife notices my close inspections. She uncurls the new being’s hand, pointing to dark patches on the knuckles. There is another behind her ear. “That’s the colour she’ll be when she grows up. And the eyes go from blue to brown.” I ponder a new world order. A mix and match meritocracy. A dib and dab domination. A mixed race that is both conqueror and conquered, oppressor and oppressed. My palette is a dark, moody, Rembrandt; theirs a riotous Jackson Pollock. My song has the clarity of a nightingale; theirs the harmonies of the Beatles. My daughter is not in my image; she is not someone I know, but a representation of a future in which I will be edged out. Perhaps bred out. So many colours in this baby as white as cotton, as white as fine China clay, as white as the flag of my surrender. By dint of birth this human hybrid has rendered me obsolete. 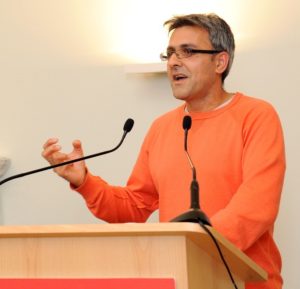 Daljit Nagra, chose Balachandra Rajan’s poem ‘None Shall Escape’ (1948), an individual response to Rama’s rescue of Sita in the Ramayana. He then went on to read an excerpt from his own retelling of the Ramayana epic which is forthcoming in 2013.

Kill that Mother!
(From a verse-novel of Ramayana. Rama and his brother are accompanying a sage so he can make a sacrifice.)
A Sage, and two boys protecting the Sage
went slowly-slowly
once north of Ayodhya
for they were in what we cosily term ‘desert’.
The five star treatment involved perfect drought
everywhere horizon’d.
The boys soon realised their summer hols involved
an anvil for a sun.
A sun that slumped its deadening weight
on stone and rock
making rock and stone fine-spun sand.
Gaps in the soil gaping.
The sun’s anvil immobile
blurring the line
between dawn noon    evening.
So this was desert. Desert also
the bleach-bones strewn
where animals had decayed.
Enormous horror jaws                         gaped
into a frozen lunge after, even just one, water-drop.
Into these dead jaws had rushed
the serpent and elephant alike for shade –
and died there. Fossilized tableaux.
Lurid tourist sight-seeing! The Sage explained
the only way to the sacrificial grounds
was through this famished landscape, adding,
‘Here was once a jolly peopled zone BUT
a husband and his demigod missus
had two boys who were born hippopotamusly tough.
As toddlers, the boy’s larrikins involved
killing for the thrill! The big-head parents
boasted of the edible end-product
the children’s play-dates were becoming.’ 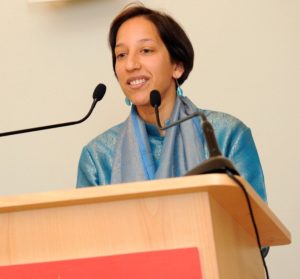 Bidisha’s choice was Iqbal Singh’s ‘Tagore – A Determination’, first published in 1942. Among Singh’s determinations is that ‘those who read [Tagore] in English are at a distinct disadvantage [for] … English is the least capable of reproducing his inspiration’. This led Bidisha to offer two of her own original English translations of Tagore’s poems. Very much a question of inheritance (Bidisha grew up in a household of keen readers of Tagore (who was born in 1861 and died in 1941, six years before Indian Independence in 1947)), these translations were the result of a joint collaboration with her mother.

(Both songs come from Gito-Bitan, Collection of Songs, published in India in 1931. The following poems come from the section of the collection called Shodesh, translated as Homeland, which contained patriotic songs by Tagore).

3rd song: ‘If there be no answer’ (1905)
If there be no answer, continue alone.
At the crossroads, on the high path, should they leave you,
On the dense road, at the tough pass, should they flee,
Should they turn their faces and offer no words,
Then read in secret the inward story
And walk the thorny road, on your bloodied feet.
If there should be no lantern light, nor hearth, nor flame,
Then do what others cannot:
Go to the storm
Pluck out a rib
Light it with thunder
And burn alone.
Much later in the collection: ‘The victory banner’
The tighter the binding, the looser it grows,
Our liberty escapes it, as light as a breath.
The trickier the knot, the rougher the rope,
Our freedom evades it, as subtle as scent.
The angrier they stare, bloodshot and stricken,
So softly we gaze, as open as children.
Inwardly we win, though outwardly submit,
The more vividly we dream, the more real is it.
The louder they shout, we grow more awake.
What’s smashed by their hand, we privately remake.
If they strike, they hit water, waves rippling like silk.
If they stamp, they hit water, waves twisting like silk
If they kick, they hit water, waves flowing like silk –
The silk of their banner,
Torn as they tear.
Share this...