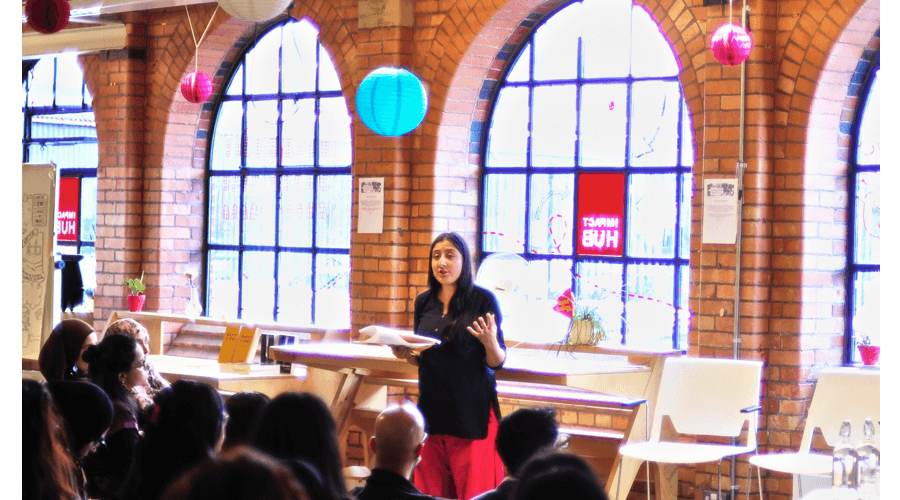 Last month, Birmingham played host to its first decolonial literature festival: ‘Literature Must Fall’. A day-long event held in the city centre, the festival brought together writers, editors and academics to explore what it could mean to decolonise and demystify literature today. Gouri Sharma reports back for Wasafiri.

‘Literature Must Fall’ was the brainchild of Birmingham-based writer, editor and academic researcher Kavita Bhanot – a natural extension of her seminal ‘Decolonise, not Diversify’ essay – who wanted to create a space to explore whether new frameworks and language were needed now that the word ‘decolonise’ – initially used to capture a wave of resistance – was being co-opted by institutions and popular culture.

Working with Impact Hub Birmingham, a well-known co-working space, and an all-women team from the local decolonial community, Bhanot said there was debate as to whether the word ‘decolonise’ should be used at all: ‘We were more interested in dismantling and building up again,’ she said. ‘To capture this we decided on the name ‘Literature Must Fall’ – to give a sense also of the politics behind the festival; that we need to take literature and writers off the pedestal; demystifying literature, questioning the idea that literature civilises, interrogating the values we pour into books and the authority we give writers,’ Bhanot added.

A top-down approach – which prioritises voices with power over those whose voices continue to be marginalised – still tends to dominate—even in events attempting to look at ways in which to decolonise culture. It’s something I’d encountered as recently as last month at the International Literature Festival in Berlin, which led to a familiar feeling of unease and distrust about how genuine this attempt at decolonising may be. In this context then, what could ‘Literature Must Fall’ – a festival created for us by people like us, that embraced a more critical approach to writing and decolonising – bring to the table, I wondered.

As the day progressed, it became apparent that, actually, quite a lot had been achieved. The various sessions addressed decolonisation within the context of a range of themes: caste, class, healing, resistance and our mother tongues, to name but a few. 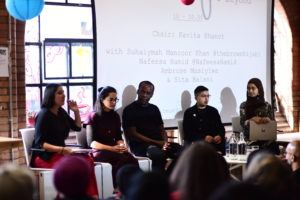 The first session, ‘Birmingham, Britain and Beyond’, was curated as a conversation between local poet Nafeesa Hamid, Leicester-based writer Ambrose Musiyiwa, Sita Balani, a lecturer in Contemporary Literature and Culture at King’s College, London, and Bradford-born poet Suhaiymah Manzoor-Khan. The discussion explored local narratives, historical ownership, plus questions around who these writers write for.  It was interesting to hear thoughts on the need to look at ourselves away from the white colonial gaze, and to avoid looking nostalgically or romantically at our own cultures. It was a strong start to the day – one that set the bar high.

The talk on ‘Healing the Othered Body’ – hosted by writer, translator and co-organiser Ayesha Manazir Siddiqi – was among the main highlights. An intimately structured talk with playwrights and screenwriters Sharmila Chauhan and Matilda Ibini, neurodiverse artist Demi Nandhra, alongside psychotherapist Wanjiku Nyachae, it delved deeper into links between mental health and the oppression people of colour, queer, trans and people with disabilities face. Revealing experiences of intergenerational trauma and sexual repression, it was a moving – at times – triggering session. It felt like any space between audience members and the speakers had closed—and the day had been pushed into deeper territory. 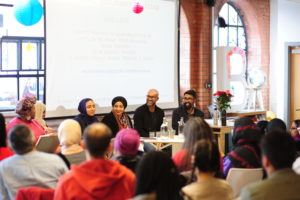 Speakers during the Muslim, Writing and Resistance panel discussion.

The ‘Decolonising Mother Tongues’ workshop was another highlight and emphasised the critical element of the programme particularly well. Conceived by Bhanot and led by Punjabi poet-and-performer Rupinder Kaur alongside PhD candidate Sara Kazmi – who is researching radical Punjabi poetry in postcolonial Punjab – participants critiqued the poems of two-well known Punjabi poets: Amrita Pritam and Shiv Kumar Batalvi. Fine combing through each poem, paragraph by paragraph, it allowed for an examination of the Punjabi language through the lens of poetry, and the issues around casteism, racism, patriarchy and colourism embedded within it. It helped the audience face important questions: How far can we truly decolonise if we are only looking at external factors, and not also at the ways in which our mother tongues reproduce white supremacy? Furthermore, shouldn’t we be adopting a more critical gaze on how our mother tongues reinforce inequalities against the marginalised in a South Asian context?

While the festival had depth, and contained layers, there were a few things that could have worked better. I felt that the perspectives of people who identify as LGBTQI weren’t heard enough – on the panels and amid the absence of a session focussingspecifically on LGBTQI literature. Additionally, a packed schedule meant there was little time for audience interaction, and it was disappointing that the open discussion set for at the end of the day was called off last minute. These were sentiments shared by other attendees, including Rubina Jasani. The anthropologist, who is based at the Humanitarian and Conflict Response Institute in Manchester, told me: ‘I thought there should have been more time for audience interaction as the audience was equally interesting and had a lot to contribute. I also would have liked to revisit the decolonisation discussion at the end of the day and delve deeper into some of the key learnings from the sessions and nuances of the conversation.’ 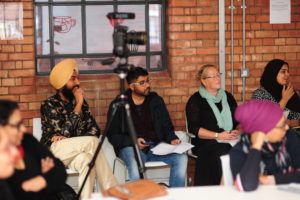 This was the first edition and there was some clear hits and fewer misses, but there’s much the festival got right at its first attempt.  In the run-up to the festival, the organisers posted a Toni Morrison quote: ‘We don’t need any more writers as solitary heroes. We need a heroic writers’ movement: assertive, militant, pugnacious.’ With audience members interchanging with speakers, any sense of hierarchy was dismantled, and a more inclusive atmosphere could be felt.It was refreshing to be among people with lived experiences invited to speak specifically for the work they are doing to challenge, disrupt, resist and heal – as opposed to self-proclaimed or overly hyped ‘experts’ who leave little in the way of inspiration or imagination. Adding to this atmosphere was a distinct female energy: there was a significant female presence among the 150-odd people, including speakers. 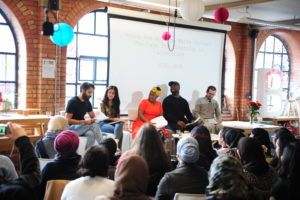 Actors performed during the ‘Where are all the white voices? The case for diversity in literature’ session. Photo credit: Jetender Singh

Programme-wise, it’s not often one has the opportunity to go from listening to an Ambedkarite writer critique Hindu upper castes decolonial discourse, to a white author who critiques his own whiteness while bringing layers  – to the idea of a homogenous working class – to a look at the colonial roots of science fiction to a talk by Muslim writers about resisting in the current climate. It’s also not often one goes from watching a satirical play on the need for diverse voices, where the white author is in the minority (cue funny scenes where ‘panelists’ talk about winning the ‘Looker’ Prize) followed by a group meditation session. And yet, this was all successfully packed into a single day. Jasani added: ‘A lot of thought had been put into the themes that would be addressed through the day. The choice of speakers and the order of speakers had a logic to it and the discussions flowed seamlessly. Seldom do I find that I attend academic meetings where the quality of discussions are so good.’

On curating the festival programme, Bhanot said: ‘Our intention in putting this festival together was to go beyond the binaries that can be performative – facing whiteness – and to have conversations that are also about looking at ourselves, at the layers within, amongst people of colour.’Given some of the strong feedback on and offline, Bhanot said this was just the beginning for the festival, and the ‘Literature Must Fall’ collective, amid plans for future events, a publication and a website.

Many among us – myself included – would welcome this, because beyond the set festival agenda, what emerged during the day was a space for writers, poets, creators and readers to feel comfortable and open enough to express our vulnerabilities, our power, our self-critique, and our imagination without judgment or fear of reprisals.  As speaker Balani said at the end of the day: ‘It’s been really moving to be in a highly politicised intellectual space, in a way that the current moment does not want us to do. This is rare and we should celebrate it and hold onto it as we go back out there.’

Gouri Sharma is a journalist/writer based in Berlin. She writes on culture, current affairs and colonialism.