Q&A with Lesley Nneka Arimah: the 20th winner of the Caine Prize 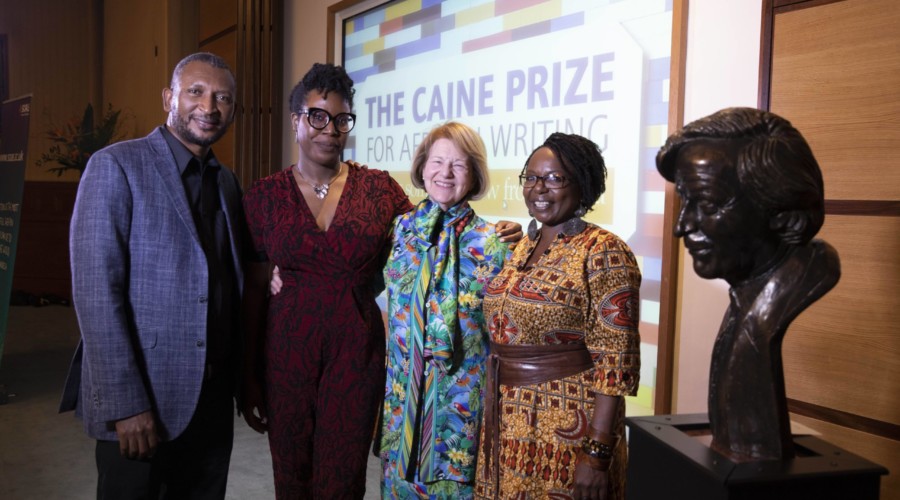 On July 8, 2019, Lesley Nneka Arimah was awarded the 20th Caine Prize for African Writing for her short story ‘Skinned’ (published in McSweeney’s Quarterly Concern) in a ceremony at SOAS, University of London.

The Nigerian writer shared space on the shortlist with Meron Hadero (Ethiopia) for ‘The Wall’, Cherrie Kandie (Kenya) for ‘Sew My Mouth’, Ngwah-Mbo Nana Nkweti (Cameroon) for ‘It Takes A Village Some Say’, and Tochukwu Emmanuel Okafor (Nigeria) for ‘All Our Lives’.

Of Arimah’s ‘Skinned’, chair of judges Peter Kimani said:  ‘The winner of this year’s Caine Prize for African Writing is a unique retake of women’s struggle for inclusion in a society regulated by rituals. Lesley Nneka Arimah’s ‘Skinned’ defamiliarises the familiar to topple social hierarchies, challenge traditions and envision new possibilities for women of the world… Using a sprightly diction, she invents a dystopian universe inhabited by unforgettable characters where friendship is tested, innocence is lost, and readers gain a new understanding of life.’

In an email interview, Arimah tells Wasafiri about the appeal of the short story, ‘centring the African gaze’, and the role of the writer today. 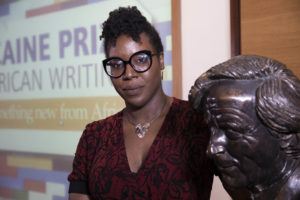 Sana Goyal for Wasafiri: If you had to describe your winning short story ‘Skinned’ in one sentence…

Lesley Nneka Arimah: A world where women must remain naked until they are married; there are complications.

The Caine Prize is an annual award for short stories. Your debut, What It Means When A Man Falls From The Sky, is a collection of twelve stories. What space – literal, metaphorical – does the short story form afford you? Why does it appeal to you?

The short story requires that you compress a life, a world, into mere pages. It is a challenge and I find it exhilarating. When a story doesn’t work, then—after a few tweaks—does, there’s nothing more satisfying.

I mean that we must not center cultural outsiders as our primary audience. In my invented world, I mention the osu as an underclass. It’s an exaggerated take (in contemporary terms) but most Nigerians know who the osu are and why they appear this way in my story. They would also understand if I’d, say, made the osu the ruling class (something I or another writer might do in the future). If I had to essentially pause the story and explain who the osu are in the Nigerian context so that non-Nigerians would get it in the same way, ‘Skinned’ would have lost intensity and momentum, and it would have signalled to Nigerians that I don’t think of them as an audience worth talking to directly. It means the story loses complexity because the writer is wasting time doing Culture 101. It’s an old trope, but it’s like when stories do things like explain basic Nigerian dishes because it’s overly concerned with not losing the Western audience. It’s so self-conscious. Trust the reader’s intelligence.

You’ve been shortlisted for the Caine Prize twice before. You also won the 2015 Commonwealth Short Story Prize for Africa, the Kirkus Prize for Fiction for your debut work, and were honoured by the National Book Award’s ‘5 Under 35’. What have these prizes meant for you? How have they enabled you as an emerging writer?

To be practical, the prizes that come with funds buy me more time to write uninterrupted and those that don’t give a certain validation. I wrote before I won any prizes—before anyone was even interested in reading my work—so it’s not motivation to continue, but reward for work already completed. That’s the most important thing to keep in mind, that the work comes first.

You’ve said somewhere that you like ‘creating new myths that speak to our current world’. Why do you feel compelled to create alternative worlds—speculative worlds, dystopian worlds? What are some present-day concerns that preoccupy you and permeate into your fiction?

If we look at speculative fiction through the ages, from mythology to fairy tales to folklore to more contemporary forms like science fiction and superhero comics to magical realism, we have always used it to try and understand or interrogate the world around us. So why not be as deliberate in creating myth as those who came before us, so that those who come after us can better understand our concerns and our cultural obsessions?

It’s Wasafiri’s 35th anniversary this year, and we’ve been thinking a lot about the role of writing today. At a time when the literary landscape feels more globalised, but also as fraught as the political sphere, what are your hopes and fears for de-centred writers, censored writers, writers whose voices are marginalised within mainstream Anglo-American literary culture—and for literature?

This feels like the best time to be a writer seeking an audience, but I’m sure writers thought the same 30, 50, 70 years ago. My hope is that more voices are heard, more writers of uncomfortable works are elevated and that writing in translation becomes less segregated from works written in native tongues. My fear is that the market will treat these growing voices as a trend to drop a few years from now as though a person’s voice is comparable to peplum shirts or cold shoulder sweaters. This is another reason to focus on speaking to those that will listen for you regardless of what the market dictates.

Are you working on something new? What can we expect from you next?

You can always expect short stories because I’m always writing them. Always. But you can also expect a novel as I’m deep into writing one now. And yes, it’s speculative fiction.

Lesley Nneka Arimah’s debut short story collection, What It Means When A Man Falls From The Sky, is published in the UK by Tinder Press.

All photography by John Cobb/The Caine Prize for African Writing.