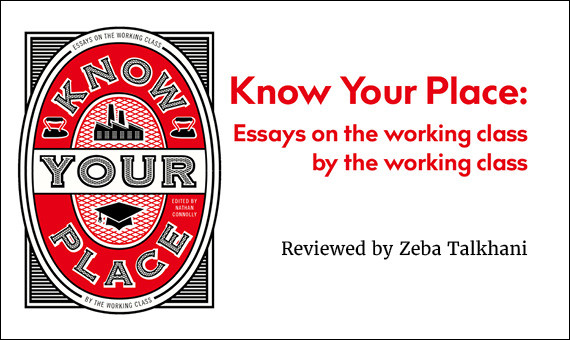 Know Your Place is a collection of essays on working class experiences by 22 writers including Kit de Waal, Durre Shahwar Mughal and Catherine O’Flynn. Published by Liverpudlian indie Dead Ink, it was crowdfunded on Kickstarter, which is fast becoming the standard for book projects that mix social activism with literary merit. The project was in part inspired by Nikesh Shukla, editor of The Good Immigrant, who tweeted that someone do ‘a good immigrant-style state of the nation book of essays by writers from working class backgrounds’. The rest, as they say, is history. Or in this case, a brilliant and necessary book tackling a grossly underrepresented subject.

I moved to the UK in 2012 and though I was prepared for the racism and general bigotry, I was dumbfounded by the class divides, even within university cultures. According to the BBC, (and something Kit de Waal mentions in her essay An Open Invitation), there are now seven social classes in the UK, ranging from ‘elite’ to ‘precariat’. The BBC has also created The Great British class calculator which asks you six simple questions before classing you. According to this calculator, the working class is divided into four categories and together they constitute 62% of the UK population. This is a singular fact that makes the under representation of the working class even more incredulous.

As Wally Jiagoo writes in his essay Glass Windows and Glass Ceilings, this seems to be the result of cliques or people’s tendencies to continue working with those they have worked with in the past, know through family or friends, or went to university with. He also writes about the financial and physiological impact of these tendencies and the almost impossible task of piercing these bubbles in pursuit of our dreams and hopes.

While the book highlights several experiences, it also comes with solutions on how we can improve the current status of diversity and inclusivity in media, books, TV and radio. Kit de Waal writes about the current representation issue in the publishing industry, why it’s important to represent the working class and what she hopes to achieve with the scholarship she’s set up for writers from disadvantaged backgrounds.

Rebecca Winson’s essay Disguised Malicious Murder: The Working Class and Mental Health explores the lack of mental health support provided to the working class in the UK and the vicious cycle working class youth can get sucked into (‘he was depressed because he was being bullied, then he was bullied for being depressed’).

The book also discusses the UK government’s tendency to scapegoat the working class and immigrants to divert attention from their own failures. In addition to this, the government is constantly pitting the white working class against the BAME working class population and in the process completely erasing the non-white working class existence. Britain’s Invisible Black Middle Class by Sylvia Arthur takes a sharp look at this erasure (‘Britain doesn’t provide a route out of the class maze, especially for the people of colour’) and explores the opportunities that await Black Brits outside of the UK. She writes, ‘The fact is, with their familial, educational and professional backgrounds, my parents would have been considered middle class had they not been immigrants’. Her essay highlights that subverting the working class isn’t only about maintaining physical and psychological boundaries but also racial boundaries.

In One of Us: Some Thoughts on Sexuality, Andrew McMillan dissects his individual childhood and adolescence experiences of growing up in Barnsley to confront stereotypes and false narratives around his personal experiences of being a ‘young queer lad in the North’. His essay also explores the intersection between working class and (toxic) masculinity.

Privilege is another topic that comes up in this book. In her essay Navigating Space Durre Shahwar Mughal touches upon Virginia Woolf’s privileges when she wrote that female writers needed financial independence and a room of their own in order to write. Mughal also gives voice to a fear felt by most marginalised writers: Will I straitjacket myself as a working class/BAME writer if we continue to write about ‘what we know’? Navigating Spaces also explores the physical and cultural spaces that working class is allowed to occupy and the physiological impact of this occupation.

For her essay The Housework Issue (The Other One), Cath Bore focuses her lens on the experiences of cleaners (‘the ultimate zero hours contract’) and how they are treated as a ‘a nameless faceless serf, a servant neither needing nor warranting respect’. Having been a cleaner herself, she attests that such disrespect is common yet regularly denied. She writes about how people react to her ‘previous side line’ and what this attitude tells us about the perception of working class jobs, especially for BAME women.

For too long, the working class has been sold the lie that working hard is all that’s stopping them from succeeding. Quite a few essays in the book confront this fabrication. Sian Norris’s essay Growing Up Outside of Class tackles the assumptions people make about class when discussing your choices. (‘But I thought… I thought that’s why you’re a writer. Because your dad was an academic.’) What does this tell us about the people making such assumptions? Where do these assumptions come from and why do they exist at all? These are some of the questions Norris grapples with, along with the most existential of them all, ‘Where, exactly, do I belong when it comes to class and being a writer?’

I found Gena-mour Barrett’s essay Living On An Estate Gave Me A Community I Never Knew I Needed an insightful peek into the council estate life, something that’s not widely shared in the media. As someone new to the class system in the UK and specifically as an outsider, this book was an education like no other. I think on some level, we are all aware of the representation and diversity issue in our media narratives but reading such personal and varied experiences of being othered really puts things in perspective.

Know Your Place is a must read with universal appeal. It fits firmly in the canon of books that includes The Good Immigrant, Nasty Women and forthcoming Cut From the Same Cloth, a collection of essays written by British hijabis, which is currently being crowdfunded. Though these anthologies are doing well, there still seems to be this impression that when it comes to underrepresented voices, strength is in numbers. Anthologies like Know Your Place help give voice to the underrepresented, but they also reiterate the fact that publishing is still not ready to get behind the single story of underrepresentation. BAME and working class writers are not yet afforded the luxury of space that white male writers have occupied for centuries. And while anthologies like these help pave the path, it’s time for publishing to make room for these voices to further explore their experiences.

Know Your Place is published by Dead Ink Books.