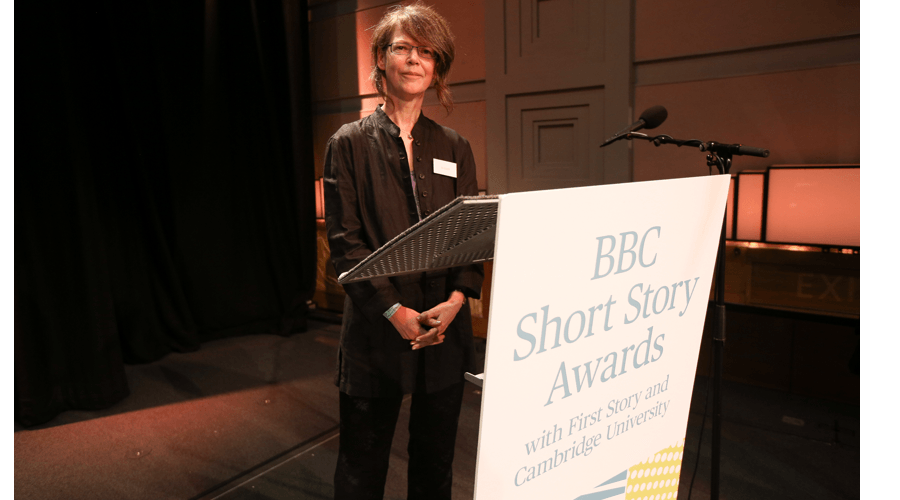 Last week, Jo Lloyd won the 2019 BBC National Short Story Award with Cambridge University for her short story, ‘The Invisible’, which is available to listen to on the BBC Sounds app, or here. She spoke to Wasafiri by email about her writing mantra, winning prizes, and that ‘other’ box which renders people invisible.

Emily Mercer for Wasafiri: If you had to describe ‘The Invisible’ in one sentence…

Jo Lloyd: It’s a story about what happens when wealthy invisible people move into a poor rural community.

Judge Cynan Jones called the short story a firework—‘the way it stays in your eyes after it’s burned out’. What is it that this particular form affords you, as a writer?

That’s a wonderful image isn’t it, the afterglow of a firework. I think I have to answer this as a reader of short fiction. I seek out stories that dazzle, move, immerse, challenge. I want them to have linguistic and intellectual and human ambition, to be generous and fresh and intriguing in their characters and themes and plotting, to show me something new about the world. I want to be able to hold the whole story in my head—and yet not quite. I am always trying to write something that could hope to live alongside such stories.

You describe the story as having ‘echoes’ of Welsh legend, and it was described at the award ceremony by John Wilson as being a ‘magical, mystical’ fable. At the same time, it is a piece based in part on a real historical figure, and rooted very much in the physical environment. Could you say something about writing this beautifully balanced duality between the real and unreal – between the invisible and the visible?

Focussing in on details is part of my writing mantra, which was originally a photography mantra—if it’s not good enough, you’re not close enough. In a story like ‘The Invisible’, capturing those details does involve a certain amount of research: I remember spending quite some time investigating when tea became a commonplace drink among ordinary working people in Britain—all for the sake of three words in the story. But there’s also a whole mass of accumulated life experience you draw on almost without thinking: medieval Welsh literature, the folk tales of various nations, the physical world of birds and plants and weather events, and the strange realities of Ursula K Le Guin or T H White or Halldór Laxness. On good days, all of it can come together and make a fully realised world that almost writes itself. And that gives you freedom to play.

Following on from my previous question, you remarked that, ‘I’m not completely convinced that the Welsh are any more mystic than anyone else in the world, but I know they have something of a reputation for that.’ Were you thinking about the way in which Wales is characterised or perhaps stereotyped when writing this story?

I think what I meant was that all nations and peoples have equal capacity for and interest in the mystic, but perhaps that quality has been emphasized in characterisations of Welsh culture. I’m wary of words being used to put any parts of society in the ‘other’ box where they can be rendered invisible. I wanted the story to be faithful to its historical and geographical setting but also to play with that a bit, and I did try to include some little jokes that might appeal particularly to Welsh readers!

You have won a number of awards for your writing – what have these prizes meant for you, over the years?

An award is a huge boost at any stage of your writing. In the UK, where there are relatively few outlets for short fiction, many writers start, as I did, by entering competitions. As well as giving you your first publication (thank you the Willesden Herald), they give you the confidence and the CV to start getting published. Prizes raise the profile of what writers do and mark significant steps in progress, so I’m tremendously grateful to the people who work so hard to create, organise, publicise and judge writing awards.

This year, Wasafiri is thinking about the importance of writing and writers in the fraught political and cultural landscape of Britain now. What do you hope writing might be able to achieve in this historical moment?

Some writers address political and cultural questions directly and are able to create a buzz of discussion that can highlight issues and even perhaps change hearts and minds. I admire those writers but I’m not one of them. Anything I do is much more oblique. But I do like to believe that all writing can have an influence, and can contribute at least a tiny amount to increasing empathy and making the world a better place.

And finally, the question I’m sure we’re all asking: what next?

Somewhat to my surprise I think I am putting together a collection. And working on some new stories. That’s as far ahead as I can see.

To read all five shortlisted stories, you can purchase a copy of the 2019 BBC National Short Story Award anthology published by Comma Press.