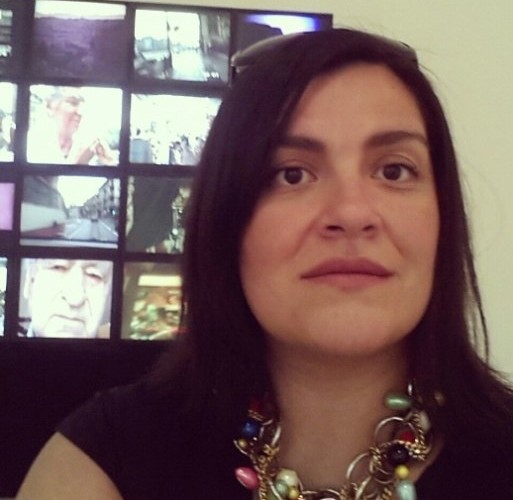 Jack Little is a young British poet and edits The Ofi Press. He is based in Mexico City.

This interview took place at Café Zena near Chapultepec Park in Mexico City and was carried out in Spanish. Rocío’s responses have been translated into English by the interviewer.

Jack Little: Please tell me about your current projects.

Rocío Cerón: I am producing a series of pieces for Project Antarctica, a collection of poems and poetic actions of spoken word that I hope to be able to present and publish in 2014.

You performed at the Poetry Parnassus in London last year. Please tell me more about your experiences there.

It was incredible to be able to participate alongside so many recognised writers, one with a Nobel Prize! I also discovered some excellent writers at the event including S J Fowler, Holly Pester and Avaes Mohammad. Also in that year, there was another poetry reading, where I had much luck in reuniting with poets like Chris Makris and Dean Atta, among others at the London Literature Festival. The links created between different poets with distinct cultural viewpoints allows for the real production of poetry. For me this is extremely important for both the readers and the poets themselves.

What collaborative projects are you working on at the moment between the UK and Mexico?

I am working on a project called Enemigos/Enemies which is a book of poets translating other poets. It is a City to City project where the poets from the cities of London and Mexico City mutually translate each other’s’ work allowing the reader in a certain form to take the pulse of these cities and what it means to breath these cities through poetry. We have already had a reading from the project at the Rich Mix Centre in London and in October we will have two readings with English poets here in Mexico City. S J Fowler and Holly Pester are two English poets who will form part of the book and will present their work at the Alameda Art Laboratory and at the Spanish Cultural Centre. This book of cultural exchanges will be available in early 2014.

How does Mexico City and its environs affect your poetry?

The ‘it’ city, can be stressful for some people who live in these mega conurbations, such as London, New York or Mexico City. For me it is a flow, a form of living. I love this type of huge city because I hear the chaos, I hear its people and this is the primary material for my poems. To listen, actively listen, is to understand the chaos of the world.

Your poetry is multi-disciplinary. Is the method more important than the words?

No. The words, the language, are the most important elements for me but I believe that poems can be or inhabit different realms. Each poem or collection of poems demands their own space. There are poems that can only live within a book, others which are more resounding, visual and have their own nature, for me open up a door to new perspectives to take us to other spaces of explorations. Each poem is its own organic entity.

Who are the contemporary Mexican poets that you are reading at the moment?

I could certainly name a few but strangely, the writers who most interest me, no longer live in Mexico and include Rodrigo Toscano, Juana Adock and Gaspar Orozco.

Is the translation of poetry an act of creation in itself?

Of course, yes. I am interested in the process of ‘trans-creation’ and to translate in this way means to recreate, to, in some way, arrive in another language. From this interest, the editorial EBL-Cielo was created, dedicated to translation in this way.

You have said previously that ‘poetry is questioning in its purest form’. Can you tell us more about this?

Poetry is a way of beginning a journey, to make one fly around the world and see many of its suspended particles at their most intimate; most deep but also a way of witnessing the everyday of the human condition. Each poem is a tiny response or a great answer and at the same it questions. I question myself with each poem. All the answers and questions that I pose based on my observations each day; these are my poems.

What does the future hold for you?