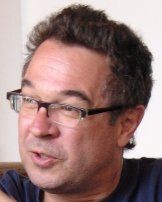 Pedro Serrano has published five collections of poems. He has co-edited and co-translated the groundbreaking anthology The Lamb Generation which published translations of 30 contemporary British poets in 2000. His libretto for the opera Marimbas de l’Exile/El Norte en Veracruz was first staged in Besancon, France in January 2000. He has also translated Shakespeare’s historical play King John into Spanish. His poetry has been extensively translated into English and published widely in the UK and abroad. He teaches at the Faculty of Philosophy and Letters at the National Autonomous University of Mexico (UNAM) in Mexico City, and is editor of UNAM’s highly-regarded poetry website, Periodico de Poesia (www.periodicodepoesia.unam.mx).

Jack Little is a young British poet, translator and editor of The Ofi Press. He is based in Mexico City.

Jack Little: You have published work in the UK previously. Please tell us about your poetry projects linked with the UK.

Pedro Serrano: The Lamb Generation (Trilce 2000) anthology is considered by many as representative of what was called at the time ‘The New Generation’. Carlos López Beltrán and I began working on it at the end of the 1990s and finished it in 2000. The poems now belong to two different traditions and are influential for all bilingual poets, not only those from Mexico or the UK. I’ve always been interested in what is now called ‘fusion’ but with a common sensibility or work that behaves like a fractured mirror; an eruption that complicates things; disruptions that enriches, embolden and develop sophistication.

I recently published an essay on T S Eliot and Octavio Paz, titled ‘The Construction of the Modern Poet’, which in retrospect might be the result of a similar drive. I am currently working on a collection of poems based on my personal experiences in the UK. It will be called Presa Ynglesa; ‘presa’ meaning both prize and prisoner. I also like the anachronistic flavour of the ‘Y’.

To what extent is the poetry scene in Mexico focused and based in Mexico City?

It used to be, in the same way as poetry in the UK was mainly written by people educated at Oxbridge — not all, of course, but a pretty good portion of it. And as Britain today, which has great poets from all over the country, Mexican poetry is now written in many different places and in many different ways, which influences all poets.

How does your work at the UNAM (Mexico National Autonomous University) impact on your personal writing?

I love teaching. For me it’s not only a delivery of a certain kind of knowledge to whoever is in front of you but an investigation, a diving together. I organise my courses as a place for intervention, in the sense that it allows students to have, produce and incorporate new things, new both for them and for me. Also, whatever I’m thinking through my teaching goes back into my own poems and modifies them.

Are there any overarching themes in your poetry?

My book in English is titled Peatlands. I think it’s a great title. It was Anna Crowe’s idea, based on a book of mine entitled Turba (peat, but also mob and related to turf). I think it’s representative of my poems as a collective work. Peat has to do with forest, wood, plants; it goes from earth to water to whisky; it serves to warm and shelter us. I write about nature, food, people, circumstances — whatever I’m able to grasp and put into words.

Please tell us about your work with Periodico de Poesia. What are the objectives of the magazine? To what extent have you and your team achieved those objectives?

Periodico de Poesia (www.periodicodepoesia.unam.mx) is a monthly journal that tries to cover all possible fields related to poetry and not only Mexican but from all of the Spanish-speaking world; not only in Spanish but also in translation; and not only written on paper but functioning in any other media. It is published by the University of Mexico and maintained by people who either work or study there. It also tries to make use of all of the possibilities of the internet. We’ve been around for more than 6 years and we have just published our 62nd issue. We are still are on the road.

To what extent is translation an act of creation?

Translation IS an act of creation. However, there is no original, only continuations and transformations. A poem written in a particular language is the result of so many movements, swerves and obliterations that the final result is that: a result, not an original. Translations are a substantial part of any particular tradition, acting at the very basis of it. I think internet is for poetry what journals were for fiction during the nineteen century: a propitiatory media.

What are your hopes for the future of contemporary Mexican poetry? How do you think these objectives might be achieved?

Contemporary Mexican poetry is strong and varied. And as I mentioned, not only limited to Mexico City. There is Jeremías Marquines in Acapulco (South), Julián Herbert in Saltillo (North), Silvia Eugenia Castillero in Guadalajara (West) and Silvia Tomasa Rivera in Veracruz (East). Also, it is written in Spanish by poets who came from other places, in Originarian Languages from America, and in other languages, such as English, but written in Mexico, and by Mexican poets living abroad — all this is part of Mexican poetic reality, actuality and tradition. Last year Carlos López Beltrán and I finished 359 Delicados con filtro (published by LOM in Chile), an anthology of Mexican poetry that can be situated both at the origins of The Lamb Generation and as a mirror book to it. Both cover poets born from 1950 to 1963 and both are the result of an intense research.

Do you have any recommendations of contemporary Mexican poets in translation for our British readers?

Coral Bracho’s Firefly under the Tongue (New Directions), translated by Forrest Gander is a very fine work. Monica de la Torre’s translation of Gerardo Deniz’s Poems (Lost Road, 2001) is a landmark as is her poetry, written both in English and Spanish. She co-edited with Michael Wiegers Reversible Monuments (Copper Canyon), perhaps the best anthology of Mexican poetry up to now. And I wouldn’t narrow the scope only to Mexican poetry. There is a book just published by the Argentinian Jorge Fondebrider, The Spaces Between (Cinnamon Press), translated by Richard Gwyn, that I highly recommend.