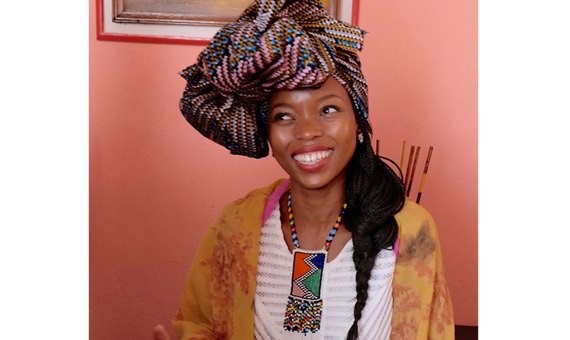 Magogodi’s work has appeared in Ploughshares and Elie Wiesel’s An Ethical Compass, and has been recognised by the NYU Reynolds Program for Social Entrepreneurship, the Elie Wiesel Foundation for Humanity and the Truman Capote Fellowship at the Iowa Writers’ Workshop, where she earned her MFA. Magogodi is a recipient of the David Relin Prize for Fiction and is currently working on a collection of interwoven stories exploring the inner lives and loves of ordinary South Africans. She is a proudly Soweto-made soul.

Tell us a little about your story ‘The Virus’. What inspired you to write it?

‘The Virus’ was inspired by a panel conversation I heard in D.C. some years ago, considering the possibilities of cyber warfare in the U.S. It was a pretty academic conversation and I think there was both a lot of interest and skepticism in the room. The panelists, led by Anne-Marie Slaughter, went through a lot of worst case scenarios, but the tone was quite upbeat. Very, “We shall, ultimately come out victorious”. Already being a skeptic of what our phones and smart devices know about us and share, I really wasn’t convinced. So my mind got to wandering … The political milieu of ‘The Virus’ is historic, informed by the Namibian war of independence and Anglo’s civil war. Both these wars were entangled in the nasty snare of Cold War proxy wars and the clandestine border battles waged by the South African apartheid regime against freedom fighters. I wonder how Namibians and Angolans remember that time. Growing up in South Africa, all my white friends would have had older brothers and uncles conscripted to fight against Namibian freedom and Angolan peace; while my people were volunteers on the other side, against the South African government. The soldiers who returned from every side of those wars were wounded. Scars you cannot see and seldom hear talk about.

You’re currently working on a collection of stories exploring the inner lives and loves of South Africans. How long have you been working on this project, and where has it taken you?

I’ve been working on these stories for years. Probably the better part of five years. Writing has taught me a lot about patience. And I’m not one for patience, so writing is a humbling experience–working on something with its own logic and time.

Can you recommend some other emerging South African writers?

My good friend NoVuyo Rosa Tshuma is a Zimbabwean Ndebele. I survived Iowa in part because NoVuyo put up with my lousy Zulu. She’s also lived and worked in South Africa for a long time. Her first book, Shadows, was published in SA. I’m excited for the world to read her forthcoming novel, House of Stone (2018). I’m currently enjoying Caine Prize 2008 Winner Henrietta Rose-Innes’ novel, Nineveh. The most important nonfiction work I’ve recently read is Ntate Stanley Manong’s If We Must Die. That book is everything. I was shocked not finding it on shelves at a very big bookstore in Sandton City. But as I checked out, I mentioned this to the man helping me and he pulled a copy from behind the register. The bookshop could not keep up with the young hungry minds that wanted to get their hands on the book but didn’t have the money. There’s nothing glamorous about crime but if I had to choose between bread and reading that book, my choice would be simple.

I write on my lap. A desk is nice, as is a cup of tea. I’ve also been known to write on my phone, on toilet paper, old receipts, work notebooks and walls. I penciled notes on the wall in the middle of the night in the middle of the country once. When it was time to leave that apartment, the landlord gave an impassioned speech about the writing on the wall. She didn’t know hers was a losing battle–my sisters and I have been blessing our bedroom walls since we were toddlers.

Very hard question. I had the unfortunate habit of burning through books mid-exams in high school. The best books always seemed to find me right before a major exam. And my sore miseducation in those moments–my craving the kind of truth and stories missing from my expensive and repressive education–was never lost on me. I remember reading Mark Mathabane’s book that way. Kaffir Boy was one of the most important books I’ve read. It affirmed me and the lives that mattered most to me. And it was dog-eared. It passed many hands at Potch Girls’ High. I was amused in later years to learn the book is required reading in many American schools; it was near-contraband at mine. Another exam-fevered book I couldn’t put down was Mark Behr’s novel The Smell of Apples. I still cherish that book. Rereading it long after high school and discovering Behr was a spy for the South African regime only deepened my understanding of that novel. And a book I’ll never forget is Antjie Krog’s The Country of My Skull. I’ve never had that sort of reaction to words on a page. I wretched. My concerned boyfriend wanted to know how I could pick up the book again on returning from the bathroom. I don’t recommend Krog’s memoir lightly but it has to mean something that the sickness it induced in me was not enough to stop my reading.

The King James Bible. I don’t believe in Jesus but I certainly believe in strong stories.

Writing. If I could spend the rest of my life writing stories I’d force my poor family to suffer through, I’d do it with a smile. They wouldn’t even have to pay me.

—
Find out more about the Caine Prize here.
Share this...