An Interview with LeAnne Howe 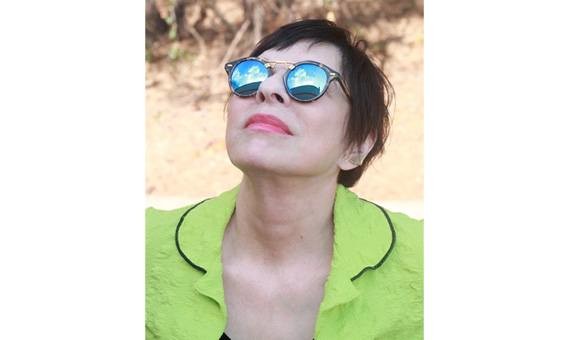 ‘A story is active and a story changes the world.  A story is changing the world as I write this.’

An Interview with LeAnne Howe

LeAnne Howe is an enrolled citizen of the Choctaw Nation of Oklahoma, scholar, and writer of fiction, poetry, creative non-fiction and plays. She is the Eidson Distinguished Professor of American Literature in the English Department at the University of Georgia, Athens and former Fulbright Scholar.

Her first novel Shell Shaker (Aunt Lute Books, 2001) received an American Book Award in 2002 from the Before Columbus Foundation. Evidence of Red (Salt Publishing, 2005) won the Oklahoma Book Award for poetry in 2006, and the 2006 Wordcraft Circle Award. Her latest two books Choctalking on Other Realities (Aunt Lute Books), a memoir, and Seeing Red Pixeled Skins, American Indians and Film (Michigan State University Press), a co-edited anthology of film reviews, were both published in 2013. In August this year, her latest play Sideshow Freaks and Circus Injuns will premier in Toronto, Canada.

Rebecca Macklin  Thinking about your journey as a writer, what led you into your writing path? And which authors have been influential to you?

LeAnne Howe My grandmother was a storyteller, so I grew up hearing stories, learning natural rhythms that must occur in stories, well told. I applied that to my own work when I started writing.

Vine Deloria in particular was a great influence to me.  He was an intellectual and a writer that was, at times polemic, but he asked important questions of non-Indians.   By reading Vine’s work, Custer Died For Your Sins, American Indian Policy in the Twentieth Century, God Is Red, especially these early works, I learned about my own questions that I wanted to ask in my work.  He also gave me courage to perform and write.

RM  As a writer that works with so many forms, how do your scholarship and your ‘creative’ writing – fiction, poetry, scriptwriting – influence each other and intersect?

LH My creative interests, these days, drive my scholarship.  For example, I’ve been writing about the Nanih Waiya, the Choctaw’s Mother Mound for the last twenty years.  For thousands of years, Choctaws were mound builders.  Six years ago, a group of performance artists myself included, received a Social Sciences and Humanities Research Council grant, to study mounds throughout the Western Hemisphere.  We visited and researched eighteen mound sites and that research material will be performed in our new play, Sideshow Freaks and Circus Injuns.  So what began as a story in my novel and short stories, grew into a large research project and now a new play, co-written by myself and Monique Mojica, with many co-creators from Southeastern tribes in the US.  It’s a large cast.

RM Do you see yourself as responding to a Native American literary tradition – either in terms of tribal storytelling traditions, or to what has been called the Native American Renaissance?

LH I don’t worry about labels, or how academics want to situate our work as Native/ Indigenous writers.  I write what interests me at the time.  I have a new book of poetry, I’ve just finished on Mary Todd Lincoln and a Dakota Indian called Savage Conversations.  I really don’t worry about labels.  Writers worry about syntax, voice, setting or landscape, plot, and the arch of the story.  We worry about craft, the art of the writing.

RM When we met at NALS, one of the main things I took away is how inherently intertwined scholarship and activism are in this community. Academia needs to have practical and tangible relevance for indigenous communities – and this is something you deal with in your novel Shell Shaker, through Auda’s work as a historian. How do you see the relationship between academia and activism?

LH Writing is a form of activism.  Again, let’s not separate into small boxes, ‘activism’ versus writing.  Native people, I think, prefer to think in more holistic terms.  A story is active and a story changes the world.  A story is changing the world as I write this.

RM Thinking about this in relation to the current political climate in the US, how do you see Native communities and authors responding to the issues that are unfolding?

LH I’m not sure how to answer this.  How are white, black, Asian writers responding to political climate in the U.S?  It’s hard to say – that is my point. I have a new poem, ‘Gatorland’ coming out in Bullets into Bells: Poets and Citizens Respond to Gun Violence in the US  (Fall 2017).  This new anthology is edited by Brian Clements, Alexandra Teague and Dean Rader and has the star power of poetic greats (I’m not talking about myself). I also have new poems in another anthology: Truth to Power, Writers Respond to the Rhetoric of Hate and Fear (Spring 2017) edited by Pamela Uschuk.  My new novel that I’m working on is about the Arab Revolt in 1917 and Arab Spring in 2011, with Choctaws involved in both those events. I write about issues and events that have taken place in the past but resonate with the present.  At least, they do for me.

Writers (in general) always respond to the politics of oppression, race, class, gender and so on.  I’m probably more interested in the question of how tribes are responding to the politics of oppression.  In October 2017, my tribe sent a group of Choctaws to the Standing Rock Sioux Tribe in North Dakota to lend support to Dakota Sioux people protesting the Dakota Access Pipeline that would go beneath the Missouri river.  The Choctaws gave thousands of dollars’ worth of supplies, lanterns, sleeping bags, propane heaters, and tents to Standing Rock. This act of tribal generosity speaks for itself against acts of tyranny whether by corporations or governments.  Many other tribes around the US sent aid to Standing Rock last year.  If we extrapolate backwards, this is an example of why tribes were so deeply connected to one another before the arrival of immigrants in the fifteenth century.  These examples offer a different view of ancient and historic cooperation among tribes, not warfare.

RM In your writing, you have explored historical instances of transnational exchange and cooperation– particularly with relation to the donation the Choctaws made to the Irish in the nineteenth century. Do you see this kind of solidarity as having the potential to counteract some of the issues facing our global society?

LH I wish I believed that. The Cherokees, Creeks, and some Choctaws supported the fledgling US and Andrew Jackson’s forces in warfare against the British in 1812-1815.  It didn’t keep our tribes from being removed by Andrew Jackson’s government from our homelands.  Alas.

RM To finish, you have spoken and written previously about the power of native stories – your theory of tribalography explores their transformative capacity. Do you feel that telling stories can help to redress power imbalances?

LH Perhaps.  But there will always be more work to accomplish.  Growing readers is a major concern for all of us.  In the beginning of my career, there were fewer Native writers.  Thankfully, that has changed.  Right now, on my nightstand, there are two newly-published books I’m reading: Carter Meland’s (Ojibwe) Stories for A Lost Child, and Heid Erdrich’s (Ojibwe) Curator of Ephemera at the New Museum for Archaic Media.  Both are terrific.  However, I meet people all the time that say they have never heard of people like Louise Erdrich, Vine Deloria, Susan Power, Natalie Diaz, Joy Harjo, Daniel Heath Justice, and Earnestine Hayes: Native writers who are alive and well in the universe and creating new books of fiction, poetry, and creative non-fiction.  We are still a ‘vacant map’ as Native writers of Native literature.  But, a story chooses a writer, not the other way around.  So I believe we write, perform, because we must.  Nothing else is of importance.  Native writers will grow and develop as the stories search them out.  That’s exciting and the stories will change the world.

Rebecca Macklin is a postgraduate tutor and PhD Candidate in Comparative Literature at the University of Leeds. Her research is focused on Native American and South African contemporary fiction.