In conversation with Jay Bernard 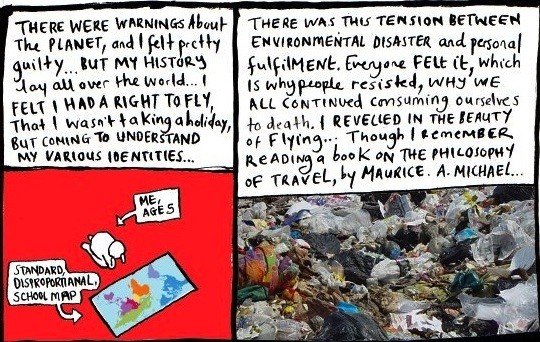 Jay Bernard came to comics via poetry; her first pamphlet, Your Sign is Cuckoo Girl (2007), was followed by a graphic poem in City State (2009). In the interim she produced graphic reviews for culturewars.org.uk and penned a strip entitled Budo. Most recently, she was artist-in-residence at StAnza and presented her first exhibition in March 2011. Her graphic work, ‘Land Narrative’, features in the special issue of Wasafiri, Black Britain: Beyond Definition, edited by Bernardine Evaristo and Karen McCarthy Woolf. She talks to Wasafiri’s Nisha Jones about her work.

Nisha Jones  How did you begin creating comics? Did the words or the images come first, and who inspired you or were your main influences (both in and outside of the comic world)?

Jay Bernard  I think I’ve been influenced by every single comic I’ve ever read: Archie, The Beano, The Dandy when I was really young — plus my uncles had a vast collection of He-Man, Conan The Barbarian, Thundercats and Masters of the Universe. Then when I got a bit older I read a cool webcomic called Writhe and Shine; got into The Sandman, Dr Seuss(belatedly) and Lenore; then I discovered Alison Bechdel, Robert Crumb, and George Herriman. I’ve never been a typical fanatic but the genre has always moved me — not just the marriage of words and images, but the overall resemblance to film, which I also like.

NJ  Your graphic tale, ‘Land Narrative’, tells the story of a traveller who ‘once had an address. Stayed somewhere. Called [herself] English occasionally’, she is accompanied by two ghostly figures and together they explore the freedom of travel and then encounter the authority figures who are increasingly imposing restrictions on movement. How concerned are you about these restrictions and what do they mean to you?

JB  Very concerned. Like most people in this country I’ve noticed the way we are steadily being boxed in. You only have to look at the attitude to the recent student protests to see that the concerns raised in the latter part of the comic are applicable; the feelings of anger and suspicion people felt in 1981 were justified and prescient. I mention Isaac Julien’s fantastic film Territories which is all about the anxiety the government has about people gathering in public, following their own agenda, organising amongst themselves. 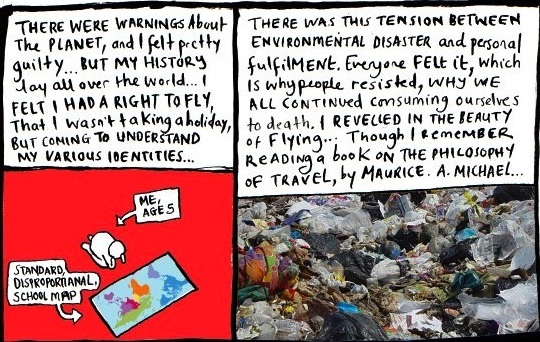 There is also Blood ah goh run, which is about the attempts by the police to abort a massive protest organised after the death of thirteen black kids during what many suspect was an arson attack. The police couldn’t be arsed to investigate properly and then tried to quash the subsequent public outburst. There is no difference between that and what we’ve recently seen: Simon Harwood pushes Ian Tomlinson to the ground during a public protest. The man is dead at the end of it. Consequence: potentially faces charges of gross misconduct. Student throws fire extinguisher off building, narrowly misses police officer. Cue hysterical shouts of attempted murder.  Obviously the dynamics are different – the scenario in 1981 is explicitly about race – but the mentality is the same: people on the streets are one step away from criminality, so police actions are always justified, and anything against them is murderous and violent in intent. Never mind democracy or the fostering of community. We are being pushed in to ever narrower channels of political/public expression and most people don’t care.  What’s really funny is that people will respond to these concerns by pointing out China, Afghanistan, Iran — as if we should only be interested in our freedom when it gets that bad.

I think freedom of movement is caught up in many things – it’s caught up in the two fundamental rights – to vote and to strike, but also our relationship to our environment. We walk down the road and Coca Cola, Top Shop and M&S etc have more right to it than us with their massive billboards; go to any town centre in Britain and you’ll find the same fifteen stores dominating everything. Every street corner has a Sainsbury’s Local or Tesco Metro. You appreciate the convenience, but you wonder why there’s a monopoly on convenience – whatever happened to the convenience store? – and why is convenience more important than diversity and integrity? It’s like we’re standing in a zoetrope with the same images whizzing past us giving us the illusion of movement, when in fact we’re tightly controlled. I went in to a Tesco the other day and there was a ‘community billboard’. It was so half-hearted and self-conscious I had to laugh. Because Tesco isn’t about community, it’s about monopolistic, manipulative rule from above. Even if you shop there, that much is obvious.

NJ  During the journey in ‘Land Narrative’ you return to the 1970s and 80s in Britain, a time of stop-and-search, heavy-handed policing and of course a Conservative government. The comic seems to suggest that despite the efforts to stamp out institutional racism in later decades, authorities are reviving the prejudicial tactics of earlier decades. Do you feel that’s the case? As you’ve just recalled, we are seeing similar scenes with the current student protests around the UK. 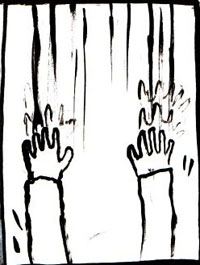 JB  Yes. The police learned a lot from those riots. They promised that they’d never again be crouching behind bin lids. The aim now is to diffuse political energy and encourage people to speak via the long, laborious, jargon-heavy and class-ridden system of the courts. Of course people have done the opposite and now speak in less than 140 characters. But the police know they can never, ever win if people band together – as demonstrated by the 60s, 70s and 80s – so yes, you’re right in a way – the prejudice is not just aimed at black kids, but anyone who shows the kind of street-level fervour they had. It’s why I think Pride and Carnival are important. They may be a little sterile, but it’s important that we have them — that sterility can change, but imagine attempting a new political street party now.

NJ  Caryl Phillips, in his most recent novel In the Falling Snow, seems to be exploring the generational differences between young Black Britons today and their parents. Your narrative seems to highlight the connections, and that the struggles of the older generation still exist for the young, who now face added pressures following 9/11 and 7/7.

JB  I think there is a huge difference between the black kids of today and those of thirty years ago. But I think that difference is based on the activities of the latter. It’s like a parent who grew up poor giving everything to their child. It really bothers me when older people say that nothing has changed and pin that responsibility on the younger generation because a) they’re essentially denying all progress that’s obviously been made and b) they’re blaming the next generation for it. It’s a weird conflicted relationship. But at the same time, I really respect the generation before me. I think there is so much to be learned. It’s why I find my degree so frustrating for example — I thought studying literature from the year dot to the present would be enlightening. Actually it’s just a distraction from all the brilliant stuff people did that is still sitting in boxes, that is not deemed worthy of academic enquiry — but the omission of a word in a bad quarto is; and surely that’s exactly the kind of cultural and historical myopia people were sick of. I have come to understand this quite late — I’m precisely the kind of kid who believed Oxford symbolised a kind of freedom. Actually I just feel removed — it’s a lot farther than the eighty miles on the map. So I can sort of understand why people in their forties and fifties are dissatisfied: their original movement has been diffused and compromised, but they don’t see that we’re trying to take up the mantle in other ways.

NJ  The restriction on movement and travel is not just a physical concern in ‘Land Narrative’, it is also about the freedom people have to represent themselves. Even the term ‘Black British’ is something the contributors to the issue find problematic, including the editors themselves. But there is an episode in ‘Land Narrative’ where the protagonist meets a queen in New York, here there is a sense in which identity and difference seem to matter, it’s how we can recognize and understand one another and what lies behind our ‘names’? On the other hand the ghostly figures are faceless and inconspicuous, they seem to live a half-life, with an inability to connect until it is too late. I found that loss particularly moving in your work.

JB  Well ‘Land Narrative’ isn’t set in a world where people are restricted, which is the sort of society most of us think we live in. No-one gives a damn where she goes or who she is. She’s a wanderer. I had in mind a line from the film Before Night Falls (2000), in which the protagonist describes his childhood as a state of ‘absolute poverty, absolute freedom’. In New York, the narrator and the Queen gel because they’re nobodies. They can kind of do what they want, identify as anything they want, be attracted to who they want. But this is obviously a position without any power. So yes, it seems to be a trade-off. Remain underground, hidden, impoverished, powerless and behind closed doors and you can identify as anything. Go in to the public realm and that’s impossible. It’s the message we’re sent every day: keep your politics and your criticism to yourself. No-one cares. You’re free to say and do what you like as long as we can’t see you and you don’t try to affect any change.

NJ  ‘Land Narrative’ also deals with representation and language. Words are not just visible signifiers, they are also integrally aesthetic and phonic signs which find movement and freedom in your artwork. For example, the line ‘I think I could Roll with you …’ writ large on a page in which the narrative twists and coils, carrying the images with it. It reminded me of the interview with poet Yemisi Blake in this issue where he says ‘I’m not sure how yet, or where the lines between poetry and art will cross, but that’s all part of its energy’. Do you find the breaking of boundaries between art forms liberating or necessary?

JB  I find it inevitable. Nothing stays pure for long.