An Extract from Arundhati Roy in Conversation 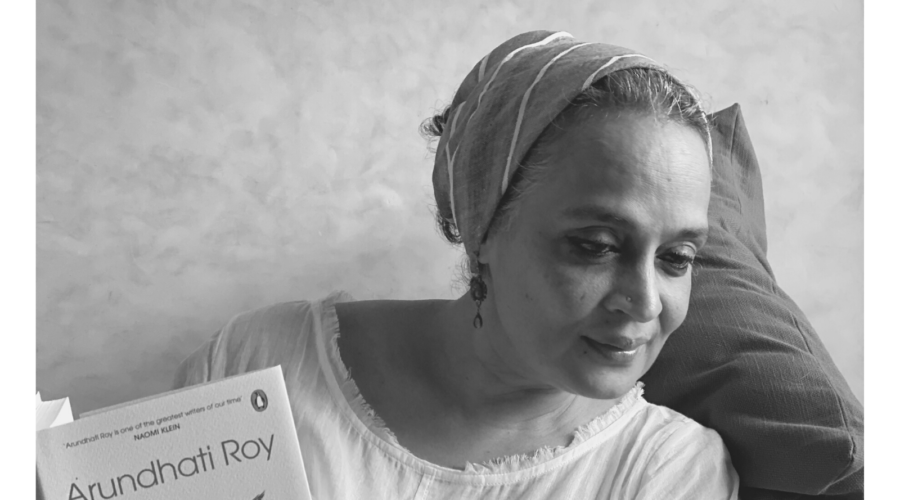 By Wasafiri Editor on August 31, 2021 in Interviews

To celebrate the launch of Wasafiri 107: Crisis/Recovery, read an extract from Pavan Kumar Malreddy’s in-depth conversation with award-winning novelist Arundhati Roy, author of The God of Small Things (1997), The Ministry of Utmost Happiness (2017), and many essay collections including, most recently, AZADI: Freedom, Facism, Fiction (2020). In this interview, Roy looks back on her decades-long career and reflects on art and protest, the role of the novel, and notions of ‘normality’ in a post-pandemic world.

You have argued that the pandemic could be used as an opportunity for corrective action, for new ways of thinking. I recall after 9/11 many commentators argued that it provided America an opportunity to reassess its relationship to the world. But it apparently didn’t.

I think I said that the pandemic is a portal and it’s up to us to choose what to drag through it, what we choose to take and what we choose to leave behind. The realism behind what is happening with Covid is that it looks as if the powers, the money, the digital world are going to use it as a way to make things even more unequal, more authoritarian, more controlled, more surveilled. You separate the conquered classes and castes, the torturable and the non-torturable, the imprisonable people and the chosen people, and so forth. It could be that Covid is giving the ruling class the opportunity to do away with the working class—mechanise, computerise, digitise. The world is haemorrhaging jobs. And the physical labour the economy  cannot do without, they will find ways of sealing off as far as possible—the sacrificial class. But when I wrote about it when the pandemic first broke out, I actually was trying to say that there is another way of using this moment. That’s what I meant when I said that it’s a portal, because it is a rupture and an opportunity for us to think twice about a return to a ‘normality’ which was absolutely unbearable for so many people. To dream of something better than what we thought of as normality. To change and to reassess our luggage. But I fear what we are heading for is something worse, not better.

Can we turn to the title of your latest work [AZADI: Freedom, Facism, Fiction]? There are several kinds of ‘Azadis’ that run through my mind: Azadi (liberation) from a form of colonialism, and Azadi to a known place of freedom — utopic or dystopic. In The Ministry of Utmost Happiness, you say that if you bring four Kashmiris together and ask what the meaning of Azadi is, or its ideological bases, they would end up slitting each others’ throats. But you say this should not be mistaken as a state of confusion, and Kashmiris have this terrible clarity whenever they utter the word Azadi.

That particular thing about the dispute that Kashmiris have with each other about the exact meaning of Azadi, that is not me saying it. It’s one of the main characters in The Ministry of Utmost Happiness, Biplab Dasgupta, aka Garson Hobart, who is a member of the Intelligence Bureau. The task of the Intelligence Bureau and the Indian intelligence agencies in Kashmir has been to sow these seeds of discord and division and set people against each other — so that is where that comment comes from. But despite their best efforts there is a terrible clarity among people in Kashmir because of the nature of the oppression, the military occupation, has turned a whole population into insurgents — in mind, not deed. Right now, through fiat and ordinance, every bone in Kashmir’s metaphoric body is being broken. But still, after all this, miraculously the spirit of that struggle doesn’t seem to be broken. Life goes on. Equally brutal, equally contentious — people are humiliated, some compromise, some fight back.  I don’t remember who it was who said that eventually life is lived somewhere between the failed revolutions and the shabby deal. If it’s a spectrum, I’d rather be somewhere closer to the failed revolution than the shabby deal. There’s more honour in that, but one doesn’t always have a choice.

There is always this unrealistic expectation on the part of the readers to look up to writers and seek solutions for all kinds of social problems. How do you feel about that in relation to your own work? I think it is one of Chinua Achebe’s characters who, when asked by a journalist whether writers can offer prescriptions to social problems, says something like: ‘writers don’t offer prescriptions, they give headaches’.

When you look at literature or even political writing and you posit it in terms of problems and solutions, that in itself is such a simplification. I mean there may be solutions to the idea of building a big dam. There may be smaller dams or different kinds of water conservation that would be a better solution to irrigation and water supply. There may be solutions to a number of social, political, and economic conflicts. But is that the business of novels?

You remember the days of the World Social Forum when the slogan ‘Another world is possible’ became popular? In one of the central chapters of The Ministry, we find ourselves in a place called Jantar Mantar in Delhi — a place where resistance movements gather, people are on hunger strike, all kinds of things are going on. In the midst of all this a pair of documentary filmmakers wander from group to group asking people to say in their own languages ‘Another world is possible’ for a montage in their film. When they ask Anjum – who is one of the main characters in the book – to say ‘Doosri duniya mumkin hai,’ she replies, ‘Hum doosri Duniya se aaye hain,’ meaning ‘I’ve come from the other world.’ Anjum is a Hijra, Urdu for transgender. She has lived much of her life in Old Delhi in a haveli called the Khwabgah, the House of Dreams, with people like herself, a range of non-conforming genders, a whole other universe, who refer to the ‘normal’ world as the ‘Duniya’, the World. So they think of themselves as belonging to another world. She sees herself as coming from another world. The point I am trying to make is that it’s not just that other worlds are possible. Other worlds exist. They’re being suffocated, throttled. Novels can show you those other worlds, can show you different ways of fighting, living, loving, laughing, different things to laugh about. So, those worlds exist. And they connect to each other. To speak about novels – such grand and complex things – in terms of problems and solutions — is, in my mind, a little sad.