‘I am always writing a novel’: In Conversation with Romesh Gunesekera 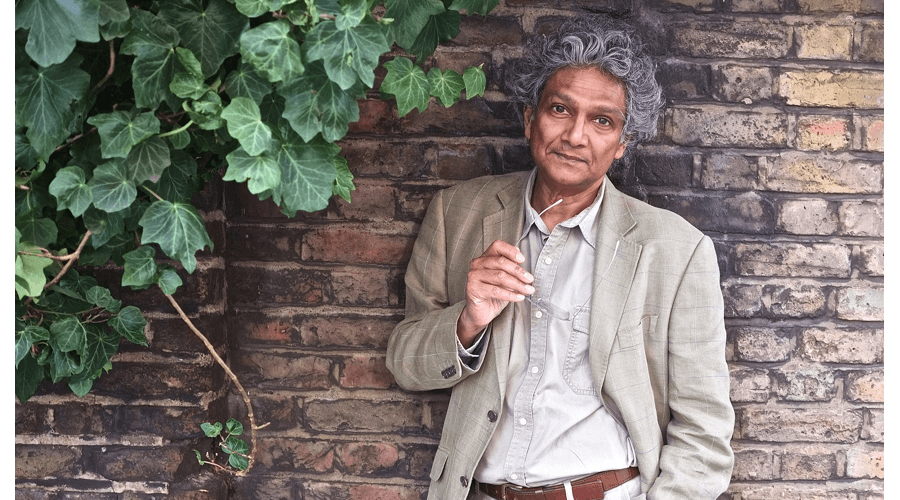 By Wasafiri Editor on November 28, 2019 in Articles

I first encountered Romesh Gunesekera’s work back in 1999 when he gave a reading from his short story collection Monkfish Moon. Characterised by their precise and acute observations, Gunesekera is a masterful storyteller especially in the way in which he creates landscapes and environments, be they urban or rural, internal or external, natural or man-made. He also has a knack to draw the reader into the confidences of his characters, and this is also very much in evidence in Suncatcher, his latest novel.

It is the story of two adolescents, Kairo and Jay, growing up in Colombo in 1964. The novel is focused on Jay and Kairo’s growing friendship, their relationships with their parents, and their extra-curricular activities as their schooling is interrupted by a political crisis and upheaval. Jay befriending Kairo is transformative. Kairo becomes invested in Jay’s life, as he discovers and starts to share Jay’s love for the natural world. They both go on adventures together, have a vacation at Jay’s uncle Elvin’s estate in the countryside, seeking out other ways of educating themselves. And while the friendship between the two is the beating heart of the novel, it develops a series of concentric circles. There are, for example, the relations of their parents and the social circles they frequent. The novel also deals touchingly with the precarious fracturing of families. Jay’s family is about to break up; Kairo’s parents too lead parallel lives. Gunesekera compares and contrasts both families in relation to their different politics. Kairo’s mother works for Radio Ceylon; his father is an ardent socialist. By contrast, Jay’s family is landed gentry – his uncle runs an estate in the countryside and his father is a businessman. The novel, through the boys’ interactions with their parents, filters carefully the political situation of Ceylon through its precise temporal setting, a moment of deep political crisis with many contemporary echoes.

In his interview with Susheila Nasta, ‘An Island is a World’: One to One with Romesh Gunesekera, published in our 35th anniversary issue – Wasafiri 100 – Gunesekera briefly mentions Suncatcher at the end. The conversation here further expands on the themes and concerns with which the novel engages.

Florian Stadtler for Wasafiri: Your previous book, Noontide Tool, was a short story cycle. What made you return to the novel?

Romesh Gunesekera: It is not a return because I am always writing a novel; it is what I do all the time. Suncatcher is the sixth or seventh novel, depending on how you regard the last book. In Noontide Toll I wanted to develop the short story form that I had started with in Monkfish Moon and create a hybrid that might satisfy both the appetite for long form fiction as well as the short form.

Where do you see Suncatcher sitting in relation to Reef, The Sandglass, Heaven’s Edge, The Match and Prisoner of Paradise?

It revisits the era of my first novel Reef: 1960s Ceylon. Noontide Toll was focused on the recent past – the aftermath of the war in Sri Lanka – and so, after that, I wanted to go back to a time before the war to try to understand the society from which such things could unfold. Each of my novels is often a reaction to its predecessors in focus and in the way it plays with time. 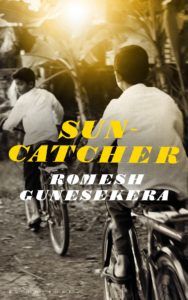 The novel works hard to capture a particular political moment in Sri Lanka’s/Ceylon’s (as it still was then) history. Did you conceive of the novel as being a historical novel, or did you actively want to consider the idea of a country at a crossroad that transcends its specific context? Or was it more important for you to capture 1964 Colombo society? It’s a very distinct moment, with the aftermath and consequences of the Sinhala-only policy, redistribution of land, socialist economics. All of this does not often get represented.

My original intention was to locate a novel in the ’60s that I knew first hand but which seemed a world away and only half there even in memory. But the more I investigated it, the more politically interesting it became. I could have set the novel two years earlier or two years later but 1964 became, in my mind at least, a pivotal moment. The political left was at its peak with the leaders of the oldest left-wing party in Ceylon, the Trotskyite LSSP, joining the government. By the end of the year that government had fallen and the paradigm had shifted. A new political era was born. The ultra-left took new forms in subsequent years. These political shifts seemed to me to mirror the kind of shifts in perspective that young Kairo goes through as he begins to grow up shedding his adolescent skin for a not necessarily better adult one.

I found the relationship between Jay and Kairo really intriguing; there is a rivalry here but also a form of unspoken admiration, even love, between the boys. What for you was the driving force behind their friendship?

Both boys are at a point in their lives when they feel the need to reach out to someone else, without quite knowing why. The younger boy wants a hero, and the older one wants a follower. It is one of those rare moments when two individuals find an inexplicable bond. The mix of rivalry, admiration and love is something one finds in many relationships at different times. And the day-by-day shifts in this mixture is what makes life difficult for both.

The book is also very much engaged with a question of class. How difficult was it to capture the Cinnamon Gardens elite circles and what kind of research did you do?

In the 1960s, when I was a young boy, Colombo was not a big metropolis. The population was about half a million. There was hardly any traffic; you’d find bullock carts and rickshaws on the road, but also horse-riders and the occasional sports car. I knew the sorts of houses that both Kairo and Jay lived in. I was lucky enough to have access to a wide range of society at many levels. But I didn’t rely solely on memory. I did the research; I read the reminiscences of people who lived through that era as well as everything I could find written in newspapers and magazines of the time about life in the Colombo that my characters inhabit.

The novel has a very specific soundtrack as well; how important was it for you to capture rock and roll, jazz, movies, and radio broadcasts of the period? Was it for you part of an expression of youth culture or more of a symbol for the hedonistic lifestyle of the parents? 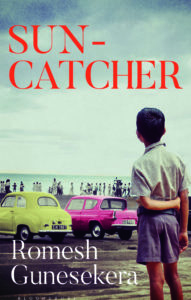 I like to get the details correct, as far as possible, and I like specificity. So, I hunt for the right birds, the right songs, the right books, the right cars. I have looked up the radio schedules of the Ceylon Radio Times so that what the characters hear is what was in the air. It is mostly for my personal satisfaction of retrieving and recreating. Many of my novels have a soundtrack, but the references are usually quite subtle: an echo of a line from a song. But in this one I do name some just as I name the birds and the plants so that you can see them.

I was intrigued how you focalised the novel through Kairo and how his child’s perspective, and also Jay’s, make value judgements about their parents. How helpful was it for you to adopt the teenagers’ perspectives to configure and consider the clash between a business elite and an intellectual elite aligned with socialism?

Although this book started out with Jay as its focus, it turned out to be more Kairo’s story. We see the world through his eyes because we can then see how the world forms him. Learning how to reconcile the contradictions he sees in the world around him, including in Jay, makes him what he becomes. The clashes in the adult world, to do with ideology or the environment, affect him; these things impinge on us. Politics have an effect whether we like it or not, and that effect starts at an early age.

There are so many interesting sections in the novel, but one that especially stood out for me was the episode on Uncle Elvin’s estate. I found it intriguing how you staged the relationship between Jay, Kairo and Gerry. How important was it for you to have a character like Gerry? In some ways he reminded me a little bit of Triton in Reef.

Gerry is an important character. He is the innocent and the one that suffers most unkindly. His life is in stark contrast to the other two boys. He’s used by them both: by Jay for his fantasies; by Kairo as almost an instrument of political awakening. Gerry’s strength is his ability to adapt and learn, if given the chance. When I first started thinking of this novel, Jay had a touch of Billy Budd but in the end that might have shifted more onto Gerry.

The novel on the one hand is a detailed and powerful dramatization of city life and life on the estate, but through Jay’s and Kairo’s lens we also very much get a sense of the natural world especially the avian world. What importance do you place on this engagement and relationship? Was it a way of showing a different side to urban life as well as plantation culture, often seen as degraded environments?

Part of Jay’s allure is his affinity to the natural world. Not only does he understand the wild, he is the wild. And he lives with this great fear for the future of the natural world, which of course we all now share. But in 1964, although Rachel Carson’s Silent Spring had been published, the fear of that natural habitat vanishing was rare in Ceylon, and the worldwide environmental movement was yet to take off. He sees himself as a saviour of the endangered world, and that leads him to take some extreme action. I think we recognise that feeling in today’s world. He is also the bridge between the urban and the rural. In some ways the world of these two boys is one in which that line of demarcation becomes blurred. And that blurring is something that we seem to want today; it is part of the impulse we have for rewilding urban spaces. If Jay was around today, I think he would be appalled by the growth of Colombo into a metropolis and the concrete spreading over the planet – the risks to biodiversity – but at the same time he would be gratified to see the unexpected new greening of his hometown and the amazing work that enthusiastic environmental and conservation groups manage to do in protecting both urban and rural wildlife.

To what extent do you want us to consider the caged bird metaphor in relation to Jay, his mother, but perhaps also Kairo’s mother?

Each of the characters is in a cage, gilded or not; each also has his or her own song.

Florian Stadtler is Senior Lecturer in Postcolonial Literatures in the Department of English and Film at the University of Exeter. He is Wasafiri’s Reviews Editor.

Read ‘An Island is a World’: One to One with Romesh Gunesekera, published in our 35th anniversary issue – Wasafiri 100 – online, or buy a copy here.