‘I ain’t go lie. This novel is a love letter to Trinidad’: Ingrid Persaud 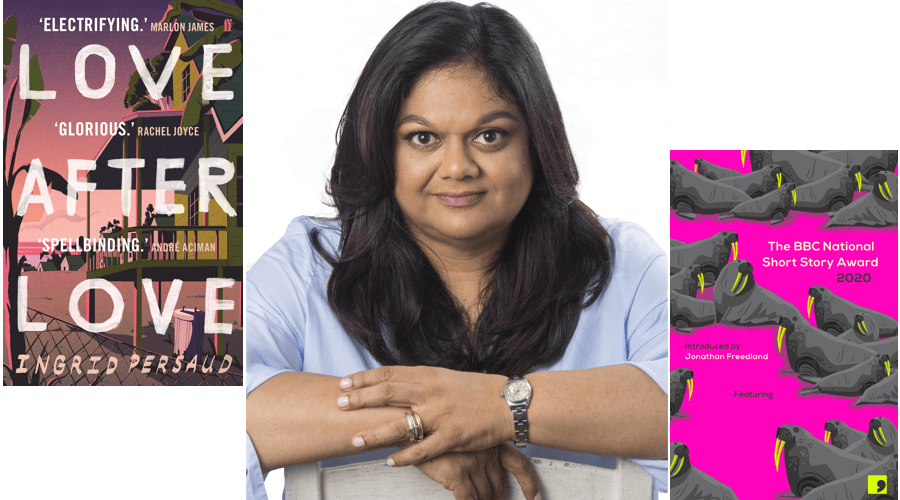 By Wasafiri Editor on September 1, 2020 in Articles

She won the Commonwealth Short Story Prize in 2017, then the BBC National Short Story Award in 2018. Now, Ingrid Persaud brings her most expansive, ambitious work yet. Love After Love has already generated international headlines. The novel has been hailed as a ‘stellar debut’ by The New York Times; ‘a memorable, moving account of wounded people’ by The Washington Post; ‘playful and rhythmic, seeming to beat its own drum’ by The Guardian; and ‘a vivacious tale of trouble in paradise’ by The Telegraph. It is a beautiful and moving novel that reminds us of the power of fiction to bring different people together.

‘My three characters – Betty, a widow; Solo, her son; and Mr. Chetan, their lodger – have a hard time believing that they will ever mend after a secret is revealed that tears them apart,’ Persaud said in April. “They pass through all kind of thing. Yet love saves them.”

It is the culmination of a story that began in multicultural Trinidad, where Persaud was born. At eighteen she moved to the United Kingdom and had careers as an academic teaching Law at King’s College London – later abandoning that to study and practice fine art – all before taking the plunge and becoming a writer.

In this interview, Ingrid Persaud talks to Wasafiri about how ‘all the longing and desire [she has] for an unbeatable breakfast of tomatoes choka and hot sada roti [she] poured into the writing’ of Love after Love.

Violence, too, plays a pivotal role. Was this another concern?

It’s impossible to write about Trinidad without acknowledging the ever-present threat of violence. But what upsets me even more is that as a society we are so traumatised that we are immune to the images of violent deaths splashed across newspapers and blogs. While the novel does not shy away from violence, I hope it is not voyeuristic.

It most certainly is not. But speaking of Trinidad, the novel is organised around three main voices. This allows you to handle the dialogue in a specific way. Quotation marks are removed and attributions omitted—something possible because of your adept handling of distinct registers for the characters. How did the form of the book come about, evolve?

It happened by trial and error. Writing in the first person created the appropriate level of intimacy, let me wander around each character’s brain. And the voice – in dialogue and in internal musings – is kept consistent with each character so the reader can more easily follow them on their journeys. Stripping away the demarcations of punctuation and syntax brings us more fully into the personality and closes the gap between reader and speaker. And of course, as they are Trinidadian, I had to use their authentic voice—hence the language.

I love all the characters, but I feel Trinidad is the star of this book. Your descriptions of food (including cascadoux), references to art (the photographer Maria Nunes makes an appearance), your plotting of tourist hotspots (the Caroni Bird Sanctuary, the Wildfowl Trust) and your care in preserving Trinidadian idioms (‘the sea don’t have a back door’)—the roll call is weaved together memorably. How important was culture for you in terms of moving the book forward when you were writing?

I ain’t go lie. This novel is a love letter to Trinidad. Having lived in self-exile for most of my life I am always navigating my relationship with the island of my birth. It remains my spiritual home but years away makes me an insider-outsider. This push and pull is agonising. Yet what if we were to embrace the liminal space of non-belonging stepping outside the tiers of nationality and choosing to be all and none of the places we inhabit. I would like to think that this allows me to build a place called home that feels more authentic to the lived experience.

In Love After Love I got to celebrate so much that is wonderful about our tiny island. The people and the place are inter-dependent—drawing strength from each other. Trini idioms are boss: putting goat mouth, cockroach don’t have no business in fowl party, fisherman don’t say he fish rotten. And many of the references are personal. I grew up in San Fernando so that hill where Jackson and Chetan picnic is a part of my childhood. Maria Nunes and I were at St Joseph’s Covent in Port of Spain at the same time. I have witnessed a funeral pyre on the banks of Gulf of Paria. All the longing and desire I have for an unbeatable breakfast of tomatoes choka and hot sada roti I poured into the writing.

You became widely known first as a short story writer. What are the common demands of the short story and the novel and how do you see them diverging?

The demand of any writing is that you give of your best—that you persist until you have nothing more to offer. I find short stories less forgiving—a bit like poetry must be for you. And because they are so precise they are often harder to write. The novel has been a chance to exhale, to take more time to think through the elements of writing. But I am drawn to both forms and always have a short story bubbling away on my laptop.

Do you think of scenes in novels as short stories?

I am not conscious of doing that but I guess a lot of the rules of short story writing do come into play. But I’m a visual person so the scenes are part of an ongoing movie in my brain. Every vignette must earn its place in the story.

When it comes to LGBTQ life, writers concerned with the Caribbean have moved away from the innuendoes and implicit disdain apparent in the Windrush generation literature to a more varied, fuller picture, ranging from the tragic to the triumphant: All Decent Animals by Oonya Kempadoo, and more recently Marlon James’ fantastical Black Leopard, Red Wolf. I’m a little like EM Forster in that I’ve always been concerned with how things end for gay characters in books and films (Play the Devil, Children of God). Without giving anything away, I felt in Love After Love there was a satisfactory balance between wish-fulfillment and realism. You don’t approach anything with kitten gloves, but you are sensitive to a perspective that some might not understand or recognise—particularly readers looking in from bigger, metropolitan spaces. I was wondering if you had any thoughts on these kinds of issues as you approached your dénouement or the writing more generally? Is there a power in saying dreams do or don’t come true?

When writing about Mr. Chetan’s life I tried to be true to what I felt was his reality rather than any agenda I might have. His choices – or rather his lack of choices in a repressive society – don’t make for an easy life. If we continue with Lorde’s notion of erotic power then I guess he is an example of how tapping into that innate strength we all possess can make us whole. His relationships are flawed but when he finally dares to embrace a most authentic version of himself he finds quiet happiness. Dreams do come true if you are prepared to sacrifice the things that are holding you back.

The central theme of the book is as old as time. Yet, this work is very much of the moment. It tackles government failures in Trinidad, race relations (where African and East Indian populations vie against one another). It touches on the deceptions of the immigrant dream (in the US and the UK). It embodies the legacies of British Empire, be it the slavery that accompanied it or the system of East Indian indentureship that later buttressed it. In these pages, all of these things coalesce with the ongoing struggle for gender parity, particularly in a space like Trinidad where violence against women is an issue, as well as the struggle for basic legal protections for the LGBTQ community. Despite all this coverage, you don’t feel like you’re reading a newsreel. It all falls naturally into place in the narrative. Did you cultivate this? How important was it for you to hold up a mirror?

If I thought for one second that I was covering such grand themes I would be paralysed, unable to write a single word. I set out to write about ordinary lives. That these lives can be a mirror for society speaks to the power of the everyday and the overlooked. The fundamental power of fiction itself lies in our attempts as writers to recreate those lives. It is a measure of the maturity of a society that we are able to see what is reflected, embrace it and grow stronger from that knowledge.

The power and the politics of the everyday?

Enough is written about those with power through position, money or fame. I don’t need to add my voice to that chorus. When I want to understand life’s big questions I look for answers in lives like my own—ordinary and overlooked. It’s all there waiting to be claimed.

For me to love is to give of myself with an open heart, without fear or shame—to my family, my friends, my romantic partners. It is no more or less than a life force. In its ideal it is reciprocal but that is an ideal. I want to live where the giving is enough. And it’s also from that place that I write. But like Haddaway I’m pleading: ‘Baby don’t hurt me, don’t hurt me, no more.’

Andre Bagoo is a Trinidadian poet and writer, author of four books of poems: Trick Vessels, BURN, Pitch Lake and The City of Dreadful Night. His work has appeared in journals such as Boston Review,  Cincinnati Review, St Petersburg Review, POETRY, and The Poetry Review. He was awarded The Charlotte and Isidor Paiewonsky Prize in 2017. His collection of essays, The Undiscovered Country, is forthcoming from Peepal Tree Press.

Ingrid Persaud was the winner of the BBC National Short Story Award 2018. The BBC NSSA 2020 shortlist will be announced on the 11th September on BBC Radio 4’s Front Row. An anthology of the shortlisted stories will be published by Comma Press. This is the 15th anniversary of the award.