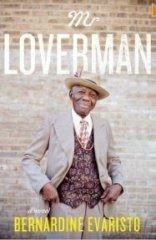 In Mr Loverman, Bernardine Evaristo comes close to pulling off the perfect novel. Intelligent plotting, lyrical language, compelling imagery, gritty urban setting – this is important in the perfect novel because the novel was invented in part to make sense of the city – interesting and articulate characters, and of course a daring subject matter.

Evaristo’s stock-in-trade has always been to revise history in a subversive, irreverent way. In Blonde Roots she took on the narrative of the transatlantic slave trade, but with whites as slaves and Africans as slave owners. In an earlier novel, The Emperor’s Babe, she placed a woman of colour, a Sudanese girl, in a position of power in Roman London. Zuleika, the narrator, is the daughter of Sudanese immigrants in London in the very early third century; she is married, aged eleven, to a senator, and several years after starts a relationship with the visiting emperor, Septimius Severus. This is a novel in verse. Prior to this, Evaristo had written another novel, Lara, again in verse, again dealing with the ambitious subject matter of slavery, history, and bi-racialism.

Evaristo’s intentions could be said, to quote Sarah Adams in her review of Evaristo’s Soul Tourists, to speak ‘for the bevy of under-exposed black figures from “white” western history’. This “postcolonialist” project is sometimes eclectic, sometimes humorous, sometimes partially successful, but always daring and challenging. At the heart of Evaristo’s writing is a constant battle with language; a “panga duel” as Dambudzo Marechera once described such a battle. As in Sam Selvon’s The Lonely Londoners, language is not only a marker of cultural difference, but an assertion of it; a volitional act. This thematisation and foregrounding of language dislocates meaning from where we traditionally and complacently assume meaning lies, thus exposing the evasions and the cover-ups in the seemingly benign, seemingly mundane use of words. For at heart Evaristo is always a poet; her affair with words and meaning is rooted in black popular culture: hip-hop and spoken word and other forms of street-speak that are distinctly urban and deliberately Bakhtinian.

All the knowledge and craft Evaristo has perfected over her career are here on display in Mr Loverman, her novel about gay love in the black British community. This is the story of Mr Barrington Jedidiah Walker, or simply Barry, self-made businessman, autodidact, husband, father, grandfather, and down-low lover to Morris, both of them over seventy, both originally from Antigua. The novel, sometimes comic, sometimes sad, sometimes farcical, can be uncomfortable (the image of two septuagenarians buggering each other, in slow detail, to the soundtrack of Shabba Ranks’s “Mr Loverman” is not for the squeamish).

The central problem of the novel is not the uncovering of the gayness of the two men; Evaristo’s cleverness is to present that fact to the reader from the outset, almost casually, for who cares if two black old men are gay or not, except for the wives – Morris’s wife Odette, who divorces him when she finds out, and the redoubtable Carmel Walker, who is still blissfully in the dark. As Barry puts it: “The problem is – we reached a dead end decades ago. The solution to that problem is a dissolution of my marriage. I decided as soon as I got up that there comes a time when the botheration and fabrication is too much, even for a man of my considerable fortitude. I want to spend my remaining years with Morris.”

There are also the children to consider, the forty-something Donna: ever bitter, single mother, ever loyal to her mother; and Maxine, almost forty, single, Daddy’s favourite and perhaps the most refreshing character in the book. And not just the children, but also the grandchild, Daniel, who is to play a central role in resolving the novel’s plot. How is Barry to break it to them that his life, and so theirs as well, has all been one long string of deceit?

This Hamletian dilemma, to tell or not to tell, is the central problem of the novel. And as the reader waits, Evaristo skillfully tightens the screws of suspense by moving back and forth in time, switching points of view. Back to Antigua in the highly masculine, homophobic Caribbean where Morris and Barry first began their undercover affair, where Barry got married to Carmel before the move to England – and as Barry procrastinates, things, as things always do, come to a head on their own.

The heart of the novel – and I wished Evaristo had focused more on that – is not the gay debate, but the self-discovery within a domestic crisis, making this a very traditional novel. Self-discovery by Barry, by Carmel, by Donna, and Maxine. Because Evaristo does waste a bit too much time trying to deconstruct the African, and by extension the Caribbean, myth of uber-masculinity. And there is the ending, which one feels is not poetically just enough; there is perhaps too much attempt to reward everyone, especially Morris and Barry. But definitely here, as before, Evaristo continues to push herself as an artist, and to surprise her readers with her eclectic choice of subject, and her search for meaning through language.

Helon Habila was born in Nigeria. In 2002 his first novel, Waiting for an Angel, was published. The novel went on to win the Commonwealth Prize for Best First Novel (Africa Section) in 2003. His other novels are: Measuring Time (2007), and Oil on Water (2010). Helon lives in Virginia where he teaches creative writing at George Mason University.