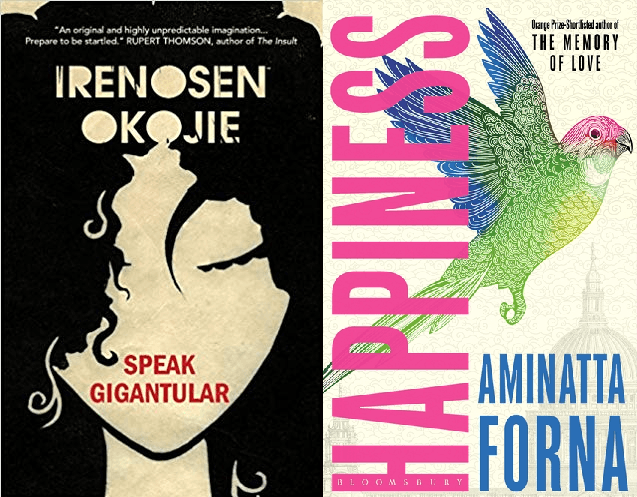 By Matthew Lecznar on November 14, 2018 in Articles

As societies across the world struggle to adapt to increasingly precarious conditions – conditions produced in part by the polarisation of groups of people along narrow lines – Aminatta Forna’s novel Happiness and Irenosen Okojie’s short story collection Speak Gigantular offer urgent and imaginative responses to these pressing developments. They grapple with the difficulties involved in trying to foster global forms of empathy between humans and non-humans alike. As Kaori Nagai argues in the essay collection Cosmopolitan Animals, ‘to think the possibility of cosmopolitan animals, we have to start by redefining “a cosmos” as a tangled-up “knot of species coshaping one another”’ (2).

Such an idea is central to the narratives of both Happiness and Speak Gigantular. Set in and beyond the city of London – that most quintessential of cosmopolises – these books depict encounters between an array of different characters and species, challenging their readers to explore the contours not only of their own humanity, but also to re-envisage the relations with others that are crucial in underpinning it. And it is not just animals who are cosmopolitan in these books. A host of aliens populate their pages — both the human and extra-terrestrial kind.

In Happiness, the fourth novel by Aminatta Forna, the symbiosis between human and non-human animals is foregrounded from the very beginning. The first section is written in the style of a nineteenth-century vignette, recounting the exploits of a man hired to kill a wolf that is preying on livestock in rural Massachusetts. The account of the wolfer’s hunt is meticulously detailed and thrillingly plotted, compelling the reader to marvel at the hunter’s skill and daring even as they may balk at his murderous purpose. Keying into a very twentieth-first century anxiety about the moral dilemmas posed by animal consumption and exploitation – whether it be for sport, food manufacturing or medicine – the opening vignette ends with a restatement of this ethical quandary. After successfully tracking down and killing a pair of adult wolves, the wolfer approaches the animals that still reside in their den:

He decided against finishing off the pups. If the truth be told it was a job no wolfer cared for: wolf pups were affectionate creatures, full of trust and play. These pups, fatherless and now motherless, would never make it through the spring. (8)

Following this evocative opening sequence, the reader is catapulted forward in time and space to twentieth-first century London. A chance encounter between an American biologist and a Ghanaian psychiatrist on Waterloo Bridge sets off a chain of events that bring their different worldviews, expertise and histories into dialogue. Although the rest of the novel revolves around these characters’ blossoming relationship, it is not just international intellectuals who are represented. It is a story that shines a vivid light on those who are often overlooked – from immigrant security guards and street cleaners to homeless dog-lovers and urban foxes. The novel’s universe is underpinned by this chorus of creatures and communities — of those living and working at the margins of the city.

Forna demonstrates a masterful ability to draw out the nuances of interactions between these different animals. At one point, as the psychiatrist Attila wanders through London, he encounters a being of a different order:

At first Attila thought it was a cat and then a dog, until finally the moving shape resolved itself into the form of a fox. […] Attila walked on and then stopped and turned round. At the same time the fox, too, stopped and glanced back over its shoulder and seemed to regard him. […] The fox held his gaze, unblinking, for a long moment, then turned and trotted on. (14)

In this moment, the human and non-human animal commune without the need for language, demonstrating the porousness of boundaries between the two species. Repeatedly foregrounding such encounters, Happiness finds a space for solidarity and empathy even if in unconventional ways. As Attila says in response to the idea of coincidence, ‘[w]e should be less surprised when life takes an unexpected turn. Life is disorderly’ (62). Foregrounding the fundamental and often generative disorder of things, the novel reframes what it means to be a cosmopolitan animal, probing the myopic assumptions and divisions that have done damage to all inhabitants of the Earth.

While Happiness offers a broadly realist vision of our contemporary world, Irenosen Okojie’s short story collection Speak Gigantular (a follow-up to her first novel Butterfly Fish) takes a different approach. The book is dedicated ‘[t]o all the misfits who dare to tilt worlds’, and its stories reflect this commitment, exploring the lives of curious characters struggling to orient themselves in the universe. This preoccupation is palpably illustrated by one story, ‘Snapper’, which depicts the tumultuous relationship of Luna and Cosmo. The narrative ends with Luna chasing her fleeing lover through the streets of London after she wakes to find him holding a samurai sword covered in someone else’s blood. Luna reflects:

I keep going for our sake, but we are changing beneath flickering city lights, a malleable sky. […] We are breakable things running. And I am waiting to trip, fall and catch some semblance of you I recognise. (172)

The attentiveness this passage shows to the endeavours of those trying to root themselves and find meaning in a shifting world courses through Speak Gigantular. However, rather than becoming bogged down in such heavy questions, the tone of the collection is lifted by Okojie’s tell-tale flair for fabulosity. Spanning stories that depict alien abductions and unusual people born with furry tails and dorsal vertebra, the book bears witness to the adaptability of misfits — those strange animals who are so often dismissed and denigrated by the world. The titular narrator of the story ‘Anonymous Jones’ sums up this ethical as well as inventive regard for difference in a description of her everyday interactions with people when working as a waitress:

I couldn’t help being interested in their stories. What some considered an underwhelming job seemed magical to me; the ability to create something from the ground up, something that didn’t exist before, which would breathe, live and buzz with human activity. (142)

In this and other passages of Speak Gigantular, Okojie discovers the magic in ordinary encounters as well as in spectacular storytelling. Like Forna, Okojie not only vividly remaps the London cosmopolis, but also imagines forms of cohabitation that evolve in unfamiliar ways. Taking their readers on an alternative tour of the city and the spaces beyond it, Forna and Okojie show a deep concern for the experiences of those cosmopolitan animals and aliens that inhabit as well as create our precarious universe.

Matthew Lecznar is a doctoral candidate at the University of Sussex. His research explores artistic legacies of the Nigeria-Biafra war, and he has published articles on the writings of Chimamanda Ngozi Adichie and Ken Saro-Wiwa. He is currently conducting an editorial and administrative placement at Wasafiri.