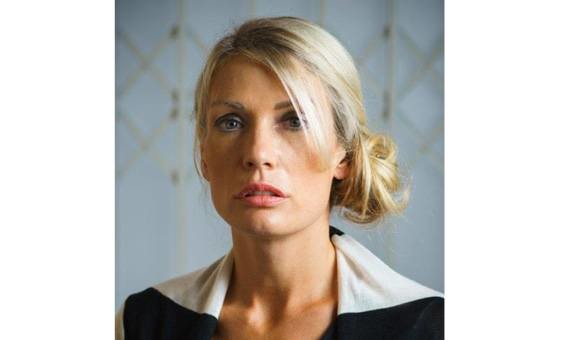 By Elisabeth Sennitt Clough on August 4, 2017 in Poetry

Due to a genetic mutation which occurred 6,000-10,000 years ago, all blue-eyed people share an ancestor from the Caucasian region – Science Daily

They say the modern Bulgarian word sin
can function as an adjective meaning blue.

As I didn’t inherit my mother’s eyes,
I tried blue contact lenses in my teens,

tried to match her shade of aquamarine,
richer than the sea on Greek postcards.

Still, no one ever said, your eyes are sapphire blue,
as my school friend’s dad once told my mum.

Mum said this man looked like Paul Newman,
whose surname she’d been born with,

from the German, Neumann, to mean newcomer.
I pictured their blue-eyed ancestor

resting in her cradle by the Black Sea,
waiting to disperse sin across the world.

I smelled the pines on the Balkan peaks,
heard the wind moving through them:

northward to Varna, Constanta, Odessa,
and on its breath it carried rumours

of a new-born girl, named not for her beauty,
but the mutation in her eyes.

Elisabeth Sennitt Clough lives in Norfolk with her husband and three children. Her pamphlet Glass was a winner in the Paper Swans inaugural pamphlet competition and became a Poetry Society ‘Top Pick’. Her debut collection Sightings was published by Pindrop Press. Her poems have appeared in The Rialto, Mslexia, Magma, Stand, I,S&T, and The Cannons’ Mouth.