The Gate by Roshanak Pashaee 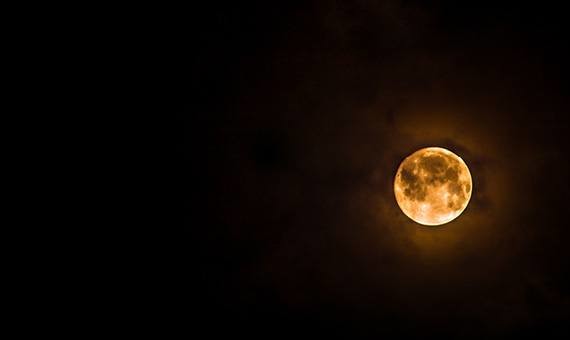 The clock says twenty five past one and the moon is full. The wind rustles the trees of our leafy suburban street and the Count in his dark cloak keeps staring lecherously at my neck from the binding of Stoker’s Dracula. All we lack now is a wolf to howl. Hoo, Howl, now or never, Hoo, Howl, but there are no wolves in the vicinity; a few stray dogs maybe.

I am getting dressed in a way not to wake Granny and her cousin Mrs. Sima. Being members of the Elderly Women’s Local Symphony Orchestra, they practice their wind instruments devoutly each and every night. It is an arduous undertaking and olfactorily offensive; yet a fine specimen of most harmonious snore-fart pair work.

Earlier today, Cousin Sima lifted her hand and kept it dangling in the air long enough for us to notice her absolutely yellow new ring. Then she shook her head and looked at Sadaf knowingly. “Knock three times and say the wish. Remember not to go after three. No one should see you.” She fell silent then and her hand fell flat on her lap as if it were a separable piece of her body raised by invisible strings that had suddenly ceased to be.

Aunt Fariba began to hum which is expected of her at times of crisis.

“Something is burning” Sadaf sniffed.

“What?” Granny looked at aunt Fariba.

“Hard to tell. Potatoes maybe?” Sadaf looked at me with inquiring eyes.

“Yes, it is potatoes.” I rushed to the kitchen.

“She is always burning food.” Granny looked dismissively at my direction. “No wonder no one wants to marry her.”

“It is my heart that is burning. My poor unlucky girl”, she broke down and wept.

Cousin Sima rubbed aunt Fariba’s shoulders. The rest of the women encircled her staring at teardrops falling off her chin onto her dark green sleeves. Someone had to give her a paper tissue to clean her nose with.

“Suitors these days! They have no regard for customs. To leave such a nice girl without a word? The world is coming to an end.” Granny spoke and everyone sighed.

Cousin Sima kept rubbing aunt Fariba’s shoulders until we felt they would come off any second. She seemed wholly absorbed in some very crucial thoughts. Deep furrows were formed in her brow and the more she rubbed the more purple her countenance became.  What could possibly be the matter? We wondered. Suddenly she erupted with a revelation in the form of a question. “You didn’t let him touch you, did you?” Aunt Fariba stopped crying and stared at Sadaf. Granny coughed.  As for Sadaf, volcanic temperature did not agree with her; therefore, she took refuge in the kitchen with me and the potatoes.

“My girl is shy. You are embarrassing her.” Aunt Fariba sniffled.

“And such a beautiful girl too, others are not as beautiful as she is.” Granny looked sideways at me– Granny can never get over my father’s marriage to my mother. “She takes after her”, I heard her say once.

Cousin Sima, also looking sideways at me, said: “It is her chest. Flat. Men like some meat there.”

“I will not have anyone speaking against my little Sadaf’s breasts. Just look at them, two beauties. What more could a man want?” Aunt Fariba sulked.

Cousin Sima looked straight into aunt Fariba’s eyes and with a smooth shift of pupil direction drew her attention to me as the right object of their latest debate.

“Oh”, Aunt Fariba uttered with sheer lack of interest. “She takes after her mother. That is why.”

There is an old saying, according to cousin Sima, that if you knock the gate of a mosque three times at midnight and make a wish, you will be granted the wish. There is a mosque near our house; it is twenty five past two and Sadaf and I are getting dressed to try our luck. Who knows? May be if we observe the procedure, we will be granted two good husbands apiece.

We tiptoe to the door at last without tripping over any pieces of furniture. I go first and Sadaf follows. Sadaf must have a cold. I can hear her wheeze behind me. I hope she does not sneeze. The stairs are a bit hard to descend but one good point about the dark is that your eyes get used to it after a while. We both cling to the railings until we reach the door.

Now we are out. It is pleasantly cool. The street lamps are on but once you enter the shadowy realm of each tree, you become invisible. We can hear police sirens somewhere. There must have been a street fight or violence of some sort. Except the sirens, the occasional rustling of the leaves, and Sadaf’s apparently congested nose, there is absolute silence. It is a five minute walk. The mosque is a blue dome and two tiled minarets sitting quietly among the trees. In the moonlight, the dome glows like the head of a bald man.

“Would it work on an iron gate?” Sadaf asks.

“Iron is too heavy, see.” She says. “So they must have meant the ritual to be performed on wooden gates.”

“But Cousin Sima did not mention wood or iron?” I mutter rather disappointedly.

We are standing right behind the closed gate now which is green with decorated lines of calligraphy on its top borders. “Are you ready?” Sadaf asks. She sweetly steps back so that I can knock first.

I shut my eyes and try to concentrate.

“Shall I say a prayer?” I hesitate.

“She said to say our wishes only.” Sadaf says.

I close my eyes again and try to ask God as politely as possible. “Please God. Dear God please” or maybe it is right to say “Most reverent God, please.” My heart is beating fast. I must do it properly or it would not work.

“Shall I say it aloud?” I hesitate again.

“She did not tell.” There is an undertone of impatience in Sadaf’s reply.

This time I should make it final. “Please God …”

“Listen.” Sadaf whispers. We can hear sirens very clearly. They must be close by.

“Who are they chasing?” Sadaf asks apprehensively.

“Someone hiding behind a tree”, I say, picturing serious men in dark blue pointing their guns at the tree.

We stand close to each other and look searchingly at an obscure point in the dark. Sadaf is breathing even more noisily than before. She might never get the chance to try her luck.

“Come on”, she whispers urgently. “Come on”.

There is no time to think. Instantly, I raise my arms, and with my open palms hit the cold iron gate as hard as I can three times. The leaves rustle in acknowledgement.

“Your turn now”, I step back.  While Sadaf is knocking, my hands tingle.

Roshanak Pashaee was born and raised in Iran but she lives in the United States at the moment. She looks forward to publishing a collection of her short stories at some point in the future. Most of these stories revolve around the life of an Iranian woman in a fast changing world.