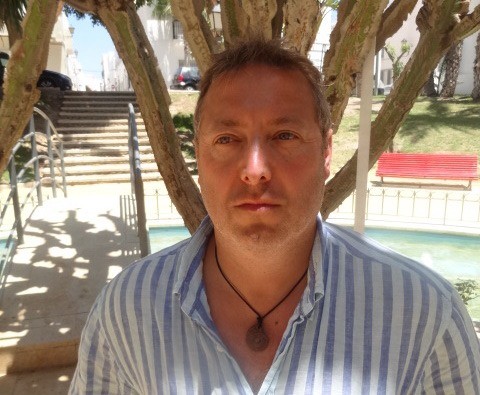 Simon Van der Velde was born and educated in Newcastle upon Tyne where he trained and practiced as a lawyer, before leaving the legal profession to concentrate full time on his writing.  He now lives in Newcastle with his wife and two tyrannical children.

Simon has won both the Wasafiri New Writing Prize 2014, and The Park Publications Prize, 2016.  His work has also been short-listed for numerous novel and short-story awards including; The Writers’ and Artists’ Short Story  Prize, 2016, The Yeovil Literary Prize, 2015, The Luke Bitmead Bursary, 2014, Room to Write Awards, 2014, The Harry Bowling Prize, 2012, and The National Association of Writers’ Groups Open Competition, 2011.

Stories and excerpts have also been published in Wasafiri Magazine and The Crack Magazine amongst others, and recordings have been audio-published and are available on-line at www.ListenUpNorth.com.  Further works may also be read at www.simonvandervelde.com.

I’ve just finished The Green Road, by Anne Enright, which, whilst it claims to be a novel based around a dysfunctional Irish family, could equally be regarded as a collection of short stories with settings scattered across the world.  What impressed me was the writer’s range, but what I really enjoyed was the messy truth of it.  As one of four siblings myself, I felt like I was reading about characters I already knew.  And of course, wherever they ran to, they couldn’t outrun their childhood selves.  Thank you, Anne.

My very best work used to be done in bed, in the dark, with my eyes shut.

Then the children came along, and for some reason, between wiping noses, finding shoes and refereeing fights my wife has lost sympathy with this style of work.  So now I have to hide out in the attic.

Does travelling inspire you to write?

New places and people can be both inspirational and distracting, and like all new experiences, they take time to digest.  So whilst at this point in life travelling is a luxury I rarely have, there’s plenty of material to work with.

The real key for me is to keep pushing myself out of my comfort zone, and in that sense I can get much of the same effect by taking a night-time walk through an unfamiliar part of town.

In the end though, when the research is done and the words are flowing, don’t move. Don’t go anywhere.  Don’t change a bloody thing.

Paper and pen, or laptop?

I like to get my thoughts onto the page as directly as possible. Paper and pen feel more natural.  Once I sit at the computer free-flowing play turns into work, though it does have the advantage that it is then possible to decipher the final product.

I might have been seven when my sister gave me a beautifully illustrated book of Norse mythology. Sadly both the book and title are now lost, but I still remember the thrill of those envious, devious, beautiful gods who as it turned out were a lot more help in understanding the world around me than the righteous God on offer from my parents.

The Long Road to the Deep North.

I wouldn’t presume to tell anyone what they should read.  I never liked it when people did that to me.

But surely now more than ever, when the very process of civilization seems to be thrown into reverse, we need stories of truth and sincerity, of dignity in the face of despair, which I suppose amounts to stories of heroism in all its forms.

More personally, I want to read stories which recognise that the greatest heroism lies in the small things, and that from each quiet moment we build the days and years of our lives.

I’ve got an eye on All That Man Is by David Szalay.  I like the ambitious stuff, though of course the trouble with books is, like people, you don’t really know what they are about until you’ve given them several hours of your life.  And by then, of course, it’s too late.

Wasafiri keeps ideas circulating, developing, and renewing.  It is a way of keeping in touch with our post-colonial cousins, and reminding ourselves of what we have in common in our near history, as well as in our shared heritage as human beings.

Wasafiri helps me relate to the dreams and passions of other cultures, an essential tool in my ongoing struggle against the narrowing of my horizons, and the resultant asphyxiation of ideas.