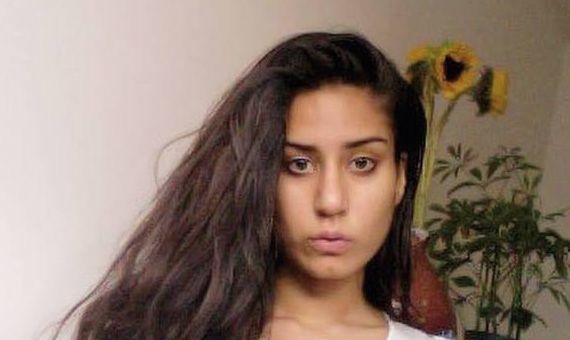 Aria Aber was the joint-winner of the Wasafiri New Writing Prize for Poetry 2014. Her winning poem was ‘First Generation Immigrant Child’. She lives in London.

Muriel Rukeyser’s The Life of Poetry.

Everywhere. I am both a public and private writer. It depends on where I feel most comfortable at that moment in time, and often that’s in the library, especially when I am working on research-based poems. I don’t have an “office” space in my house, so at home I can only write after midnight, when everybody is asleep and the only sounds to interfere are the moaning pipes in the walls and the fridge humming its strange hymn.

Does traveling inspire your writing?

I love being in motion, having my body walk long periods of time, or be still in an object that is mobile and travels through space, such as a car or train. It really alters the state of my consciousness—quite literally, it feels less stagnant and the rhythm of movement influences the seed of the poem that could emerge. Considering my own displacement, and my slightly nomadic behaviour of moving around countries and across continents, yes. Also, I would call myself a stateless writer, unaffiliated with any certain place or its political regime, so exposure to a multitude of topographies often provides me with the illusion of belonging. When I was hiking through the depths of Peru last year (and I’m not even good at hiking, I hate hiking, I’m the worst), I saw the topography change from arid to humid to arid back to humid within seven hours. Something unexplainable happened—my cynical self suddenly felt kinship with the ancient idea of pasture.

I barely write long-hand, as I enjoy the mechanical clicking sound of the keyboard when I write. Pen and paper are still cool though. I keep notebooks wherein I catalogue things that have caught my eye or fragments of thoughts, beginnings of lines, titles, little scraps that have to be developed further.

It’s hard to say. There were many different first books in my life, at different stages. To think of it in a chronological order, the first poet to change the way I employed a word was certainly Celan in Poppy & Memory. Then, Rilke’s Letters to a Young Poet. Later on, I discovered Anne Carson’s Autobiography of Red. I think the latter influenced my writing life in inexplicable ways, because Carson’s oeuvre relies so much on translation—the unsaid between source and target, the audacity of doing it at all, the ancient idea of the impossibility of translation—and re-narrativising aspects of collective consciousness and mythology in a way that, to me, is incredibly empowering. I think C.D. Wright’s One Big Self has radically changed the way I regard language that belongs in a poem. Edward Said over and over again.

I sincerely abhor this question, because it’s incredibly unrealistic and limiting, but I know it is meant well, and a way of asking about a favourite book. I would probably take Rilke’s Letters to a Young Poet. And a notebook. And a survival kit.

This is already old news, but Ocean Vuong… and everything Solmaz Sharif writes. She is the most important poet to me at the moment.

And there are so many incredibly brilliant young poets, who are changing the conversation in original ways. I could list dozens—I think of Safiya Sinclair, Natalie Eilbert, Natalie Shapero. Momina Mela, although her collection is not out yet, is also producing exciting work.

Layli Long Soldier’s Whereas, once it’s out with Graywolf this year.

Regarding UK poets, I am very excited about Kayo Chingonyi’s full-length, which is scheduled to be out with Penguin Random House, as well as Emily Berry’s second collection.

An incredibly important role in reviving the conversation about “post-colonialism” (if we want to call this time actually post something that is still extant), and offering a space for literature with emphasis on writers of colour. That’s a unique and beautiful position to be in, especially considering the UK literary scene.