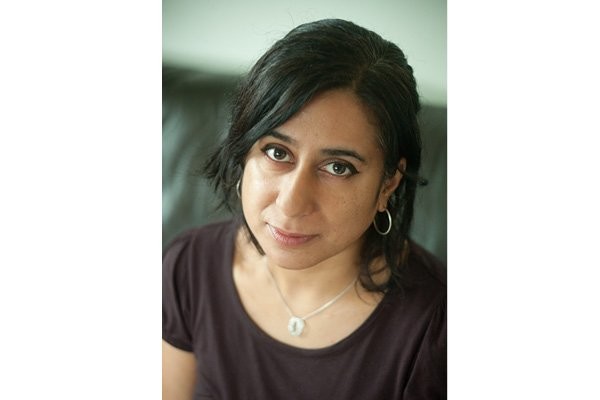 Anita Pati won the Wasafiri New Writing Prize (poetry) in 2013, has been a Jerwood/Arvon mentee and was one of 2015’s Aldeburgh Eight winners. Her poetry has been published in magazines and anthologies including Poetry London, The Rialto, Best British Poetry, Magma and The North. She has been a journalist, a library assistant and other things in between. Anita is working towards her first collection.

I’m still dipping into The Good Immigrant edited by Nikesh Shukla. These are fresh, spiky essays by mostly second/third generation immigrants. There are some great observations, for example, how Western yoga teachers insist on ending classes with “namaste” when it means “hello”. I’ve got a few poetry magazines on the go plus a book on Victorian domestic interiors. I’m also reading Reasons to Stay Alive by Matt Haig. It’s an accessible, ostensibly light-hearted book about suicide prevention and useful if you know anyone with depression.

I either jot notes down on scraps of paper or on my Notes app while on the bus, or write at my computer looking out across Hackney.

I don’t do international travel as much as I’d like but as mentioned, the bus and other forms of passive transport send me off into reveries.

Paper and pen if nothing else is available as my handwriting has become illegible over the years. Desktop rather than laptop.

I was given Hilda Boswell’s beautifully illustrated Omnibus: A Treasury of Favourites one Christmas as a kid and loved it – it really fired my imagination although I was uncomfortable with the “gollywog” characters – usually molesting blonde, white delicate girls. There was no racial debate when I was a child except, “did your dad drop you in a vat of chocolate?” Me: “no”. I used to love the Nancy Drew mysteries when I was 10 and wanted to be a detective. Philip Larkin’s A Girl in Winter and Jean Rhys’ After Leaving Mr Mackenzie appealed to my teen sense of tragedy. Like many people in the UK, reading Harper Lee’s To Kill a Mockingbird at school was a revelation on injustice.

A page-a-day diary, although I guess the days would start to merge.

I’ve just finished Amy Liptrot’s The Outrun which is such compelling reading – she clashes brutally different landscapes: lyrical nature writing about Orkney; stark accounts of alcohol addiction/binge drinking; and familiar scenes of Hoxton hipsters. She’s got an interesting take on the world.

I’d like to read Ali Smith’s Autumn and Jacob Polley’s Jackself.  I also want to reread Claudia Rankine’s Citizen: an American Lyric because there was so much important in there; what sticks with me is the notion of being both visible and invisible as a person of colour.

I loved Miranda July’s The First Bad Man so look forward to anything else bizarre she comes up with. And I’m always excited to read poetry collections – pamphlets or books – by people I know.

Only a handful of Black and Asian writers tend to be acceptable in the wider and mainstream canon – often those that fulfil white and sometimes BAME perceptions of what we should be or should write about. Wasafiri doesn’t need to do that and gives emerging (and established) BAME writers an international platform. It’s also a treasured space at a time when there is pressure to neutralise, globalise and de-politicise our narratives.