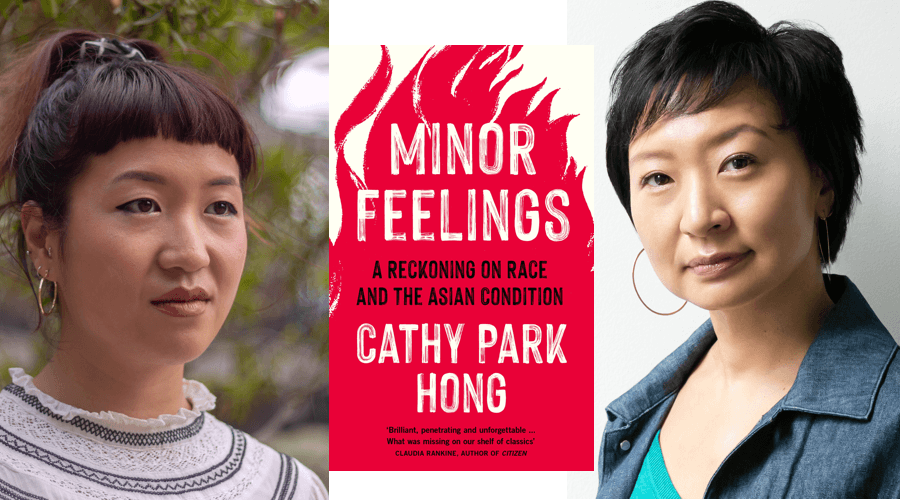 By Wasafiri Editor on September 22, 2020 in Articles

Cathy Park Hong is a Korean-American poet and essayist who is the author of three volumes of experimental poetry. Her most recent work is the non-fiction book, Minor Feelings: An Asian American Reckoning, which deftly and unforgettably explores the shame, suspicion and melancholy that permeates the Asian-American experience. With humorous and incisive precision, Hong articulates the complex permutations of self-loathing and self-consciousness that arise when minority experiences are constantly dismissed by a white world that refuses to acknowledge the specific contours of reality.

Sharlene Teo’s debut novel Ponti won the inaugural Deborah Rogers Writer’s Award, was shortlisted for the Hearst Big Book Award and Edward Stanford Fiction Award, longlisted for the Jhalak Prize and selected by Ali Smith as one of the best debut works of fiction of 2018.

Sharlene Teo for Wasafiri:  To start us off, could you tell us a bit about Minor Feelings in your own terms? How would you describe your book?

Cathy Park Hong: From the very beginning it’s been a challenge to encapsulate this book into an elevator pitch because it’s about so many things. When I say it’s about one subject, I then want to rebut that and say, actually, it’s also about this. To distil it down, Minor Feelings is essentially about the psychological effects of being invisible in a nation where the dominant culture doesn’t acknowledge your reality. I know there’s been tonnes of discourse around how Asians need more representation, but I was always dissatisfied with that discourse because I thought it didn’t go deep enough into the kind of interior consciousness of what it’s really like to be someone like me. That’s firstly what I wanted to do. Initially, it was going to be a book about institutional racism in the arts, but after Trump got elected I felt this book needed to be both broader and more personal. More personal in terms of my direct perspective on America. Its focus shifted a lot.

So did you start working on it pre-Trump, around 2015/16? How long did it take to complete?

I began working on it around 2015 or so, but I always wanted to write about race in a way that I personally hadn’t seen, a perspective that was very honest and hopefully funny and very real—not beholden to standard coming-of-age narratives. In the book I talk about Richard Pryor and my inspiration took different form – poetry, fiction – and in 2015 this book found its form when I started writing it as essays. Minor Feelings was also based around another essay I wrote called ‘Delusions of Whiteness in the Avant-Garde’ (which was published in a journal called Lana Turner that went viral). I felt there was more I wanted to say and so my work continued to expand from there.

It holds together so cohesively. In terms of the sequencing of the chapters it really flows with such a building up on ideas that, particularly by the final essay, ‘The Indebted’, there’s a real sense of narrative satisfaction. I wondered about the chronology of the drafting as it reads as a coherent whole rather than essays accumulated over time.

I didn’t have an outline. I wrote the friendship essay, ‘An Education’, first, and then it grew from that. I wrote ‘Stand Up’ next, followed by ‘United’. I jumped around a lot and that’s probably why there is that cohesiveness as I would be working on one essay and feel that a passage would belong in another essay. I definitely wanted to have that continuity.

In a way, putting together the manuscript is where my experience as a poet came in. It was more like putting together a poetry collection than a novel. There was no chronological order to it but more about considerations of pacing, thematic through-lines and images to recur and build to this kind of climax. It was much more intuitive putting the book together. That being said, when it came to actually figuring out the order it was absolutely scary! I just hate when I print something out, it’s like a one-night stand where the writing looks very sexy onscreen but when you print it, it’s like the next morning where you’re looking at the person next to you in horror thinking, ‘Oh my god. What have I done!’ After I printed the manuscript I had to let it sit on its own for a month before I could get to it and order it because I feared the essays wouldn’t cohere at all. It took a while to figure it out…

Read a sample from ‘the friendship essay’, ‘An Education’, which covers Cathy Park Hong’s poetry, her college friend Helen’s desire to prove others wrong (even at the expense of her sanity and integrity), and their imbalanced relationship. ‘I have betrayed her so much more by taking from her life,’ she writes.

[A]ll of Helen’s artwork disappeared during winter break, two months before her senior thesis show. “Disappeared” as in got thrown away. A clerical error. The administration thought she had graduated early and gave the order to clear out her studio. Her drawings, collages, and paintings that she was preparing for her show, her documentation of her installations, all her art supplies—every trace of her art-making was gone. As if she’d never made work in college. As if she’d never existed. The studio was scoured, repainted white.

As a response, Helen shaved off all her hair.

When I heard that Helen drank a bottle of whiskey and shaved off all her hair, I thought, This is it. She’s going to kill herself. But of course I underestimated Helen. Stronger than her will to die was her will to endure, especially when she thought she was being tested. This was the most Korean trait about her, her intense desire to die and survive at the same time, drives that didn’t cancel each other out but stood in confluence, which made her hell to be around, lashing out at Erin and me, saying how this was God’s design telling her she shouldn’t be an artist. But she was going to prove everyone wrong, “including you,” she yelled, jabbing her finger at me when I innocently came by her studio and offered to help. In a way, Helen was right. Because not only did I underestimate her, maybe I wanted her to fail. Maybe when I heard that all of her art disappeared, I thought only of myself, and how she’d take this out on me, and what a fucking burden it was to be her friend. Helen always accused me of feeling this way, and though I denied it, she was right: I did harbor those thoughts. I felt buried by our friendship, and maybe, just maybe, if she did kill herself, it wouldn’t be so bad. I would feel unburied. I would feel free.

She proved me wrong. She did what she knows how to do best. She worked her ass off. She didn’t sleep and was theatrical about her exhaustion, staggering around, drinking a six-pack every night, spending the early hours in the woodshop, building canvas frames until she pulled off the impossible: she produced a year’s worth of paintings in a month. She used this as a test to completely reinvent her style. Helen was obsessed with the artist Eva Hesse at the time and, inspired by Hesse, she made abstract sculptural paintings, using oil, resin, and plaster to restructure the framed canvas into pliant bodily surfaces. She made paintings with skinlike protuberances the size of tennis balls; another painting was impastoed with rivulets of plaster with a metal rebar jutting out of it. Yet another painting had pearled strands of canvas draped across an exposed stretcher. Helen painted the gallery floor a bright orange, which synergized the space and brought all the paintings together. All of my misgivings vanished when I saw the show. The students and faculty were all blown away by the exhibit. At the time I thought, I will never know a genius like Helen again.

But putting together a brilliant painting show in a month wasn’t enough for Helen. In addition, she assembled an installation in her studio, which she was debuting the following weekend. Erin told me that Helen actually wrote her own poems for the installation. I was intrigued and decided I’d see it before the show. I walked up the stairs to her studio and greeted her and her friend Jessica, who was helping her fix the lights. The walls were covered with neat layered rows of white paper. As I drew closer, I noticed that Helen had typewritten two or three lines of poetry on each page. In the corner, a small electric fan whirred, rustling the pages so they sounded like dried leaves. As I read each line, I heard influences of other poets from collections I’d lent her: Emily Dickinson, H.D., Osip Mandelstam, Paul Celan. Many lines alluded to death. As I panicked and thought, Is this some kind of elaborate suicide note? I began to read lines I knew, lines that were my own. It was a whole row of poems stolen directly from my chapbook.

I wanted to push her off the balcony of the studio.

I was sick. I wanted to rip all the pages down. Then I felt paralyzed, because who knew what she was capable of if I confronted her? Instead, I waited, while Helen joked around with Jessica and swept up her studio, until I asked her, with my voice tight and strained, why my poems were in her installation. Helen stopped what she was doing. Instead of looking alarmed or guilty, she gave me that glare. She asked, “Why are you doing this?”

It was like she didn’t even realize she’d taken my poems. She’d absorbed them the way she absorbed everything else. “You promised me you wouldn’t show my poems to anyone!” I cried out plaintively. “Are you going to tell everyone you wrote them?”

Helen interrupted me and said that I was sabotaging her. “How could you do this to me?” she yelled. “How could you do this to me?” I shouted back. But it was useless. She outshouted me, accusing me of being selfish. How could I stress her out when she had a show in an hour; didn’t I realize how fragile she was, how she was barely hanging on? She always knew, she seethed, that I wanted her to fail. The whole time Jessica watched, shocked, as Helen’s fury escalated. I was afraid Helen would get violent.

I backed down. I said, “We’ll talk about this later, when we’re calmer.” I left her studio, walked down the stairs, walked away from the art building. I crossed the road. I walked away from campus. I had a boyfriend at the time. Maybe I went to his house. I didn’t go to the opening. I heard from Erin that she took those poems down. I didn’t confront her again. I even continued being friends with her. I didn’t know what else to do but be friends with her…

Cathy Park Hong’s Minor Feelings is published by Profile Books in the UK.

This interview was first published in print in Wasafiri 103, featuring a special section on ‘Writing Whiteness’. To continue reading this conversation, buy the issue, or subscribe to the magazine.