Exclusive Extract and Performance: Life as a Unicorn by Amrou Al-Kadhi 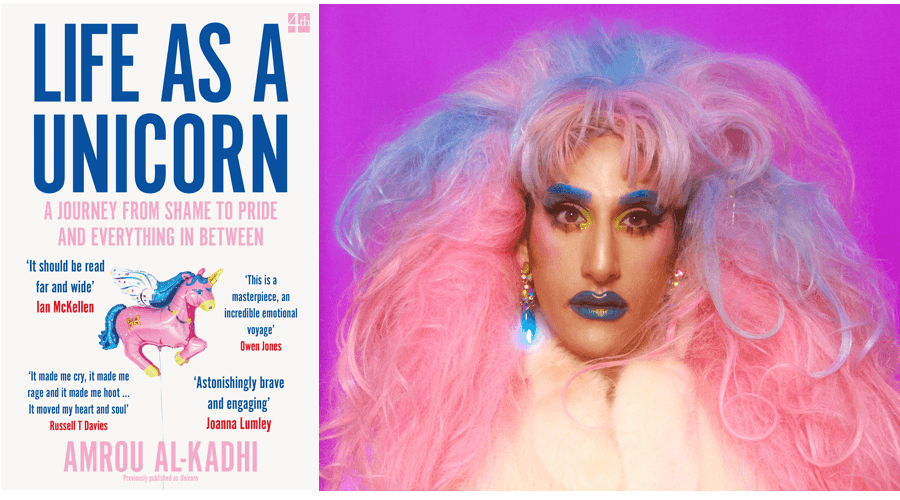 By Wasafiri Editor on October 7, 2020 in Articles

My mother’s behaviour at Arab weddings would make the perfect audition video for RuPaul’s Drag Race, and the next one we attended together only confirmed her as the clear genetic foundation for my drag career. It was a cousin’s wedding, and this time it was happening in Mykonos in Greece. (Side note: am I the only one who thinks weddings abroad are an absurdly selfish expectation on the part of the bride and groom, not least because they cost an absolute fortune?). The wedding took place over three days, the first of which was a ‘tropical’ themed party. The three-event itinerary meant that my mother was strategising months in advance, the trip more an opportunity to present a hat-trick of award season red-carpet ensembles than to actually celebrate the happy couple. Mama decided she needed a tropical themed headpiece to give her first place at party 1, but was struggling to find designers who could create one in the way that she had envisioned for her outfit. This is when she called me. ‘Amoura … I was wondering … do you know where I can get a hat with fruits and plants on it? For the wedding?’ Yes, obviously. I basically sleep in such attire. Now, the only thing I had ever heard my mother say about my drag was that it was the root of all her unhappiness; other than that, she pretended it didn’t exist, and we never spoke about Denim or what I was up to. I knew that she’d never come to a drag show, or publicly show any support for it. But her calling me to ask if I knew any milliners with a flourish for the Copacabana … well, I interpreted this as some kind of silent acceptance. ‘Why, yes Mother … I do. I have a friend who specialises in such things. Do you want me to take you to her studio?’ ‘OK. Why not.’ With the espionage tactics of one of Charlie’s angels, I called my friend, telling her that I would be bringing my mother to her studio, but that all conversations about drag were strictly prohibited, and that the fact that she had worked with Denim in the past could not be brought up. I dressed in what was probably the dullest ensemble she had ever seen me in, and took Mama to her studio, a magical Narnia of hats bedecked with neon signs, Barbie dolls, and many other fabulous additions. The milliner and I acted like faint acquaintances, and I pretended that I was seeing these hats for the fi rst time ever (when in fact I had already humped the fl oor in many of them). Watching my mother try on hats that I had only recently performed in was pretty disorientating. It felt like a scene from an Almodóvar fi lm, where many different layers of performance were occurring simultaneously; my mother, walking around the studio, was someone who I effectively impersonated onstage, wearing the same hats that she was now trying on, and she right now was like a version of Glamrou but in real life, with all of this left unsaid in an entangled merging of realities. Very quantum. Mama eventually selected a leopard-print hat that had a huge tropical leaf towering above it like a skyscraper, and which had to be placed in a box as big as an adult human. To save money, we booked our fl ights on easyJet (even though the absurd hat cost more than our return flights). Mama hadn’t got the memo that easyJet didn’t offer first class service, and she arrived at the airport with a different suitcase for each separate outfi t. The foliage-centred hat had its own altogether. So when it was time to check in, Mama was utterly baffl ed that she was being charged through the roof for all the extra baggage. With no respect for the British passengers all grumbling in the queue behind her, Mama threw a gloriously melodramatic strop that made me want to get my popcorn out. The engrossing heroine monologue ended with Mama shouting, at full volume and with her arm raised in the air like a barrister going in for the kill: ‘This is not easyJet. THIS IS DIFFICULT JET!’ At this, she got a round of applause from everyone waiting behind her, and the faintest hint of a smile creased her lips. What a queen.

Amrou Al-Kadhi, drag name Glamrou, is the founder of drag troupe Denim, who performed with Florence and the Machine at Glastonbury the year that she headlined. Amrou wrote the much applauded finale of Kumail Nanjiani & Emily V. Gordon’s hit-series for Apple, Little America; they have also written an episode for BBC America’s hotly anticipated series, The Watch, based on the Discworld Novels of Sir Terry Pratchett. Amrou has written and directed four short films that focus on the intersection of queer identity and race, and has features in development with Film4 and BBC films, and several TV shows in development. Their journalism has appeared in the Guardian, Independent, Gay Times, Attitude, CNN, and Little White Lies, among other publications. Life as a Unicorn (previously published as Unicorn) is Amrou’s first book, published by HarperCollins in the UK (2019) and Harper360 in the US (2020). Life as a Unicorn was awarded a Somerset Maugham Award. Amrou’s ‘Ways to Change the World’ interview on C4 has already been viewed nearly 3 million times.

Amrou Al-Kadhi has been nominated for this year’s Polari First Book Prize, announced on October 15.