A conversation with Shailja Patel 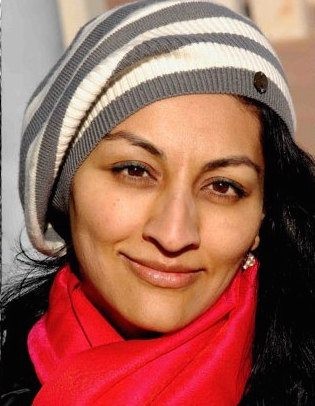 CNN calls Shailja Patel ‘the people-centered face of globalisation’. Her publishing debut, Migritude, based on her acclaimed one-woman show, was an Amazon poetry bestseller, a Seattle Times bestseller and was shortlisted for Italy’s Camaiore Prize. Migritude is taught in over fifty colleges and universities worldwide.

Patel’s poems have been translated into sixteen languages. Her essays appear in Le Monde Diplomatique, The New Inquiry, Internazionale and Counterpunch among others. Honours include a Sundance Theatre Fellowship, a Voices of Our Nations poetry award, the Fanny-Ann Eddy Poetry Award and the Nordic Africa Institute African Writer Fellowship.

Patel is a founding member of Kenyans for Peace, Truth and Justice, a civil society coalition which works for an equitable democracy in Kenya. The African Women’s Development Fund named her one of fifty inspirational African feminists, ELLE India magazine selected her as one of its twenty-five New Guard Influencers and Poetry Africa honoured her as Letters to Dennis Poet, continuing the legacy of renowned anti-apartheid activist poet Dennis Brutus. She represented Kenya at the London Cultural Olympiad’s Poetry Parnassus in 2012. Her work currently features in the Smithsonian Museum’s groundbreaking ‘Beyond Bollywood’ exhibition.

This conversation took place via Google Chat during a hot Nairobi afternoon and a wintry New York morning.

Shailja Patel: Thanks for the piercing meditation on Baga. It gave many of us words that we were lost for.

Emmanuel Iduma: Thank you. I have been thinking about your use of ‘unworded’ in response to the essay.
SP: That’s a good place to start. I’ve been thinking about the point – or pointlessness – of words in unwording times. Annie Dillard writes ‘what would you say to a dying person that would not enrage in its triviality?’ What can an African writer say about Baga? Or say to the survivors of Baga that wouldn’t make them spit? How do we make sense of this unimaginable, unbearable thing that has happened? ‘Never again’ is useless. ‘Blacklivesmatter’ is useless.
EI: I think you’re asking: what can words do?
SP: And what are words good for?
EI: I think writing is fundamentally an act of traversing emptiness, of attempting to bridge distance. Maybe this is how we begin to imagine our work in these unwording times. That is, how can writing bring us closer to the dying happening around us?
SP: Keguro Macharia teaches me about form as a container for feeling. Words as ritual: a formal structure for grief.
EI: Keguro’s words are ‘ethical imagination’ and, of course, Yvonne Owuor uses those words too. I spent the last three months trying to figure out what that meant.
SP: Your Baga piece threw out lines of connection across the severing that violence creates. We retreat into the self-protective numbness of trauma. Someone has to speak to restore community. Audre Lorde asks: how much of this truth can I see and still live unblinded? How much of this pain can I use?
EI: The genocidal scale of violence today, especially because it’s reported in real time, is designed to make us numb, to make us merely observers. My faith in writing as a way to un-numb (if I may use that word) has never been stronger. It’s a question of urgency, isn’t it? What matters to me right now? What affirms my life and that of others?
SP: Un-numbing by activating the ethical imagination was the heart of the ICC Witness project — poems by Kenyan writers on the post-election violence in 2007-8. And today, Kenya has just passed the Security Act, which makes that kind of witnessing a potential crime. I’m thinking deeply about writing that imagines and nurtures ethical life — life-affirming writing, writing against the splitting and dehumanisation that surrounds us. And how to do it in a way that honours the dead, does not deny the atrocities.
EI: Do you ever feel that the word ‘activist’ is not enough to describe your impulses as a writer?
SP: I was trained as a political economist and my first career was in finance. It’s impossible for me to write without considering relationships of power, silenced histories and resource flows. I bring the entirety of what I know to everything I write — from love poems to a riff on sugar. ‘Activist’ as it’s used in Kenya is inadequate for me because it’s come to be associated only with spectacle — bodies on the streets pitting themselves against the violence of the militarised neoliberal state. Activism defined in this way erases reproductive labour, life-nurturing labour, intellectual labour. In this space, I write to enlarge and complicate that macho narrative. I amplify and valorise the care economies that sustain and repair the bodies on the street, suture the wounds and regenerate the worlds destroyed by warfare.

EI: I remember reading that you preferred to be called ‘a brown Kenyan’. I don’t know how comfortable you are with talking about this, but did writing Migritude cast a special light on that identity for you?
SP: Actually, I prefer to be called Kenyan without qualifiers. ‘Brown Kenyan’ is my corrective to the factual error of describing brown people on the African continent as ‘Indian’. I find the ethnicity qualifier, like the gender or sexuality qualifier, always has an agenda to marginalise. Minority writers are assumed to be writing about identity; women writers are told their subject matter is gender; queer writers are asked about sexuality but the writing of straight hegemonic men is taken to represent the universal human condition. So Philip Roth, for example, who writes about his penis, is an ‘American writer’ while Toni Morrison, who writes about the foundational histories and ideologies of the USA, is a ‘black woman writer’. If it’s important to identify me by ethnicity, then it’s equally important to describe Ngugi wa Thiong’o as a Gikuyu-American Kenyan, Binyavanga as a Tutsi-Ugandan-Gikuyu Kenyan, Chimamanda as an Igbo Nigerian, Soyinka as a Yoruba Nigerian and so on.
EI: Do you wish there were more writers dealing with text-for-theatre? I mean writers writing on the African continent?
SP: I don’t see a paucity. There are many African spaces nurturing writing for stage – Sundance East Africa, theatre festivals across the continent – and some amazing voices feeding those spaces, and also writing for radio, TV and cinema.
EI: That’s comforting to learn.
SP: The problem I see is not a shortage of new writing for stage. It’s the failure of African states to create viable performing arts sectors that offer sustainable livelihoods to cultural workers. We need infrastructures that develop, produce and tour new work by local writers on equitable terms. Lupita’s success in Hollywood is a matter of national pride, but Kenyan actors and playwrights fight a constant losing battle to get paid to make work in Kenya. It reinforces a culture where serious arts careers are only possible for the children of the wealthy.