Dreaming in Latin by Jill Widner 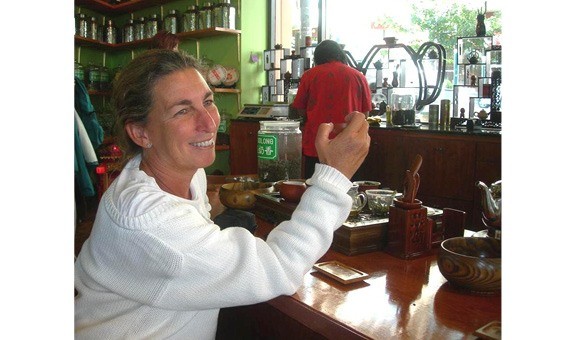 I feel as though I’ve been awake for hours or that I haven’t slept at all. But I must have. I was thinking of what you told me once about the solar plexus. The way it looks something like a dense spider web stuck onto the front of the aorta, but thick, as if years and years of spiders had deposited their webs there, maybe like a cocoon that was cut open and flattened out.

Layers of spider webs piled on the heart?

Not the heart, the aorta. The garden hose-sized tube that carries blood to the lower half of the body.

I could see nothing but spiders then, poised on a heart, salivating endlessly, building their webs. You corrected me on this too.

The silk that spiders use to construct their webs is generated from special spinneret devices.

I must have been thinking of silk worms. Then you were telling me about the tensile-strength property of silk—greater than steel, you said. Only I didn’t know whether you were referring to the spider’s silk or the silkworm’s silk. It was often like that when we corresponded.

I began to think of the state that separates sleep from consciousness as a plexus of silk, and as I peered at it and through it, there through the screen came the sounds of the night. Wind in the dogwood. The knock of bamboo. I was thinking of a walk we once took. Brush-strokes of kanji on a tearoom window. Moldering brick in a parking lot. Bright blades of grass between the cracks. You kept stopping. You kept turning to face me. The flash of your eyes was flying fish blue. Darker than the base of a spark. So close to mine, the sidewalks disappeared.

Your silence now feels like a dream I can’t wake from. I don’t know what it means.

You were going to a conference in Vancouver. An international conference for anesthesiologists on the study of pain. Could you possibly have a more fitting profession? You asked if there was a chance I could meet you there.

I was so looking forward to crossing the bridges, to the cold-water blue of Coal Harbor.

One night the week before you were to fly in, I dreamed of you. We were in a laundry room in a basement, lying together on a single bed pushed against a white-washed wall. The room looked scoured. Even the floor was wet.

But you changed your mind. I must have read the letter a hundred times.

Home from work, leaving tomorrow, feeling stubborn. You’ll probably hate me now. And I’m so, so stubborn. What I saw and felt so clearly was that I’d always come up short for you. I like to please, and I could never please you, because you’d always want me to be something different than I turn out to be. If I didn’t care about disappointing you, it wouldn’t matter. But I do.

The next day I went to the library. I wanted poetry. Life distilled. I opened a collection by Louise Glück called Vita Nova and turned to the poem ‘Burning Heart’. It’s a kind of self-interrogation. The speaker is asking herself what she remembers. But there was something else. The watercolour on the cover was the room in my dream. The bed pushed against a wall. The floor composed of wet sand. The door that opened onto a beach. The ocean breaking in the distance.

Vita nova. It means new life, doesn’t it? I found a Latin dictionary just in case there was more. Because there almost always is, and of course there was. A nova is a star that suddenly increases its light output tremendously, and then fades away to its former obscurity in a few months or years.

Portents scare me. I’ve gotten so used to you. I don’t like the thought of you not being there. Where ever it is that you are.

I love the way you wander, always trusting that you’ll be led to the right place, and how you always find it. I love the way you find meaning in every connection. Your last sentence sounds like a goodbye. Are you going somewhere? I’ve also gotten so used to you being with me. I’d miss you terribly if you left. Don’t.

Sometimes I walk outside in the middle of the night. The streetlight pours in through the kitchen window and strikes the wall beside the back door. I was pushing open the screen tonight when, there on the wall, was a shadow. Jagged ends of hair against a shoulder. A blunt nipple in the uptipped mound of a breast. It was a little hard to believe that the silhouette was mine.

I go outside to look at the stars, I tell myself. Or is it to let the cold air wake me up once and for all from the dream this relationship with you must be. Sometimes I tell myself I can see the tracks of your thoughts in the night sky, as though a meteor has broken into fragments and left a trail of you behind.  But meteors are dead matter.  Aren’t they? I couldn’t remember and wanted to know. Ah, I see now; not dead, but decaying. A brief shining trail of disintegrating matter.

But there’s more. I love when there’s more. All atmospheric phenomena were formerly classified as meteors. Winds and clouds were known as the aerial meteors. Rain, snow, hail, and dew, the aqueous meteors. The aurora borealis, rainbows, the halos that can sometimes be seen around the sun or the moon were classified as luminous meteors; and lightning and shooting stars were the igneous meteors. It’s rather a lovely way to think of decaying matter.

I went to the dentist yesterday. As soon as he moved into his chair, his whole demeanor changed. I remember being surprised by how easily and precisely he moved the instrument inside my mouth, ticking the molars, scratching the front teeth without missing or dropping his hand or catching the hook on my gums. Not everyone has such a precise touch. The hygienist is careful, but she misses all the time. So I was thinking about precision in your area of expertise.

Precision is almost nonexistent in anesthesia, or in medicine for that matter. Everything is good enough or about right or close. Drug doses are approximate. Tubes kink. Tubes clog. Tubes tangle. Blood spills. Puncture sites leak. We miss seeing most of the EKG’s heartbeats. The patient frequently wakes up a little, moves a little. The patient is frequently too deep and slow to wake up. The floor is speckled with urine, with blood, with gobs of fat that have somehow flown from the surgical field. There’s no precision, little neatness, yet the patients do well.

Afterwards I went to the bookstore, but it was closed, so I wandered down the hall. The building is a cold-storage warehouse that’s been renovated. The ceilings are open-beam. The hardwood floors glossy. I was the only one there. I liked the way the last of the light coming in through the windows gave the varnish something to reflect.

They stopped moving when I approached. One nosed closer. Then another. I remember thinking how unsightly their individual faces were.  How Alice in Wonderland-like their structure. There were the ordinary orange ones. Then there were the white ones. I remember thinking the pale cold flesh of the colorless white ones looked exactly like the orange ones turned inside out. There was a long misshapen grey one with six black spots along its left side. I think I stopped breathing, watching the fine metallic thread woven into its hind end undulating through the water. I watched them for a long time, afraid to move, because you’re like this, of scaring them away.

At the other end of the tank, I found one I hadn’t noticed before. This one was shark-colored, square-headed. One low-lit unreceptive eye faced me on the other side of the glass wall. He was lying sidewise, close to the floor of the tank, his mouth hovering over a rock. I’m not sure why I thought of him as male, but I did. His eye looked more than passive; it looked morose, spent, ready to die. It crossed my mind that perhaps he was dying. Then I wondered if he was grazing because, periodically, his mouth brushed against the rock. I began to talk to him.

What did you say?

I told him that he might feel better if he’d get up and move around. He did. First he rose up and fluttered a bit. Then he turned onto his back. He continued to look at me; I continued to talk to him, and, though he appeared to be listening, he seemed to me unable to be moved. Incapable. As you say you are. I don’t believe one can be by nature incapable. To be incapable is to be unwilling.

I remember telling you once how much I missed you. How much I wished you were near. You said, I am near.

Sometimes I think you are. But I can’t get close enough. I keep bumping into the glass.

There’s something else I wanted to ask you. It’s something you said to me once about the heart. You had taken me back to the airport to fly home. We were sitting at the curb in your car. The sliding glass doors kept opening and closing. You were ready for me to get out, but I asked you to wait. My heart was pounding so hard I was afraid that I would be unable to walk or to speak to the agent when I reached the counter. You put your hand over my heart. You said, don’t try to control it. Then you said it was your favorite place. Why would you have said that? What could you have meant?

Probably when I said that, I was referring to something physical, not something emotional. My favorite place to touch you is just next to your heart, just over your sternum. It’s hard to believe that the heart is right there, actually only an inch away. Watching the sternal saw cut that bone in two and then pulled open—it’s always a bit of a shock to see the heart beating there. Even being able to feel the heartbeat on someone’s chest doesn’t do justice to the amount of blood flowing, to the violence of the aortic valve snapping shut, to the strength of the contraction every second. It’s a hugely physical thing, perhaps the only thing in the body that can really be understood because it’s the only thing that is fundamentally about hydraulics and not exotic chemistry. And it’s right there under my hand on your chest.

Jill Widner’s story ‘Dreaming in Latin’ was shortlisted for the Wasafiri New Writing Prize 2015 and was also a finalist in the Iowa Review’s 2016 creative nonfiction competition and Narrative Magazine’s spring 2015 competition. Her fiction has been published in American Short Fiction; Asia Literary Review (Hong Kong); Drunken Boat; Everywhere Stories (Press 53); The Fiddlehead (Canada); Kyoto Journal (Japan); North American Review; Short Fiction (UK); and the Willesden Herald anthology (UK). An excerpt from her novel, set in Sumatra, Indonesia, where she grew up in the 1960s was highly commended in the 2016 Bridport prize in fiction; she has been awarded fellowships from Hawthornden Castle, the MacDowell Colony, VCCA, VCCA-France, and Yaddo. She is a graduate of the Iowa Writers’ Workshop and lives and teaches in Yakima, Washington.