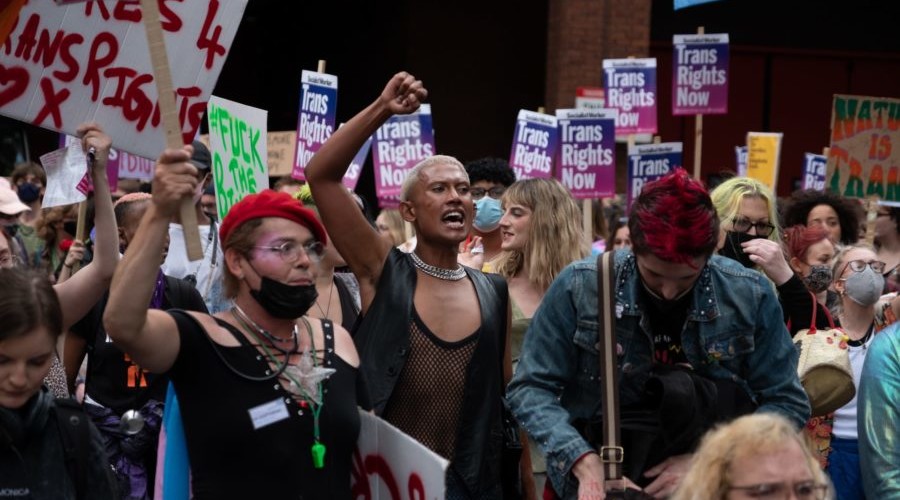 By Wasafiri Editor on April 4, 2022 in extracts, life writing

In this exclusive extract from Wasafiri 109, Nat Raha, Sabah Choudrey, C N Lester, and Roz Kaveney discuss how in the face of racial capitalism, literature and community can act as a lifeline of connection and creative expression for trans and non binary people.

You can read the full excerpt in Wasafiri 109, now available to download or purchase online.

Two years into the coronavirus pandemic, the deprivation facing marginalised groups – socially, culturally, and materially – is writ large. For trans, non-binary, and other gender non-conforming and queer people, especially those of us who are brown or Black, the extremities of feeling we’ve experienced in the past are resurfacing, and those of the present are stretching out. We have found ourselves separated from the physical, social spaces we’ve relied on for life and nourishment, and displaced from friends and family — sometimes from both chosen families and blood families. Some of us have spent much of our lives fighting abjection and denigration from the institutions that life is organised around — the family, healthcare, schools, etc. So to find ourselves alone or isolated, without or with the family, friends, or strangers we share our households with, and without the people or culture or company we need, has been difficult and triggering.

However, we’ve found ourselves looking for methods to hold and hold onto each other in this crisis, to find ways to support each other, to overcome separation and isolation, and to share joy, laughter, food, love, care and support, safety tips, and all the other things that aid staying alive, in spite of being apart. We’ve established mutual aid networks to provide basic necessities and information for each other’s bodies and lives. We’ve held space for self-expression, shared info and skills on transitions, published news of healthcare service changes and waiting times, supported friends and strangers to keep their fridges stocked. And as the pandemic hurtles us into 2022, we’re acutely aware of the mental health crisis facing our communities. In this context, we’ve found ways to hold space for grief, and to share the losses that we’ve experienced.

In the context of the pandemic, but also long before it, LGBTQI people have been creating and holding virtual community spaces — in fact, some of us first found each other through digital networks and social media. During the pandemic, there have been virtual club nights, parties, hangouts, game nights, film screenings, performances, and much more — so far as any of these things are possible DIY from one’s living room (or with some institutional support). Joy, desire, sorrow, and the rest get encoded and transmitted through ones and zeroes. Trans and queer subcultures have been a vibrant context for our creativity, and the focus of this context into the virtual has placed pressures on our creative practices while opening them for many who couldn’t join in person.

Across these letters, we find ways to situate our experiences, both in the context of past lived-experiences of isolation and separation from the communities, knowledge, and worlds that we need to live and thrive; and in the wider context of racial capitalism. Racial capitalism describes the systems of extraction & appropriation, enslavement and displacement of empires, corporations and nation-states pursuing profits and accumulation, a context that has transformed our planet into where we are now. This is a context of ecological harm and social violence, enacted upon life and land, affecting bodies and minds and souls (I think of these as inseparable) and histories and worlds. Racial capitalism is the gravitational force that shaped the United Kingdom, and has pulled those of us who have a history of migration to its shores — it shapes the cities we make life in. It’s from across such cities we post these words.

For some LGBTQI people, literature, especially poetry (the cheapest of the arts), has in fact held up pretty well. Poetry readings have become a staple of Zoom life. Across genres, many writers have found larger and more geographically spread audiences than we could have ever imagined. Readings straddling multiple time zones have been accompanied by talks and presentations from the vibrant new voices of trans fiction, as conversations around debut novels have got deep. The virtual worlds we’ve found ourselves in, oriented around anthologies such as We Want It All: An Anthology of Radical Trans Poetics, journals such as the trans fem aesthetics special issue of e-flux, and novels including Shola von Reinhold’s LOTE, Torrey Peters’ Detransition, Baby, and Alison Rumfitt’s Tell Me I’m Worthless have sown connections and friendships across oceans. Having bridged our separations, we don’t want to let this go. We’ve never let crises destroy our creativity, even if, as I describe in my letter, things now feel laden and can feel terrifying.

All of the above is part of the context for the exchange that follows, an exchange of letters between four writers, across generations and across the UK, who’ve known each other for many years. The letters dwell on some of the losses and fears that have been brought to bear upon us during the pandemic and from the wider cultural context facing trans and non-binary people in the UK, addressing why writing is so central in picking ourselves up and going forward. To share these sentiments publicly in the time of culture wars against trans people and Black and brown people, entailing regular harassment in the media of trans and cis female and non-binary intellectuals of colour, isn’t simply bravery — it’s a necessity in expressing where we are, and how we shall overcome the agents and gravities of our oppression.

These four letters shift from the prose that Sabah Choudrey, CN Lester, and I press through our pens, pencils, and keys into the classical, metrical verse of Roz Kaveney. The letters open with words from Sabah, who grapples with questions surrounding the lacunae in the archives of trans people of colour, and describes the creative urgency to write that has shaped their life. CN replies, invoking their hunger and cravings for presence and substance amid other trans bodies as part of cultural belonging, the need for ‘something I can hold in my hands now’. The fabrication of pleasure and longings for something real carry into the verse of Roz, who turns phrase and rhyme ready to fight — ‘Be constant truthful and defy,’ she encourages. In my letter, I sketch some memories of making life with these writers, and recent experiences of catching up with trans hirstories (hirstory — an alternative conception of history that emphasises the experiences of gender non-conformity and people we may describe today as trans and non-binary). I describe the weight of writing against oppression, and how we defy it to find joy.

Read the full excerpt in Wasafiri 109, now available to download or purchase online.

Sabah Choudrey is a reluctant activist on most things queer, brown, and hairy. Proud trans youth worker since 2014, public speaker, writer, and psychotherapist in training. Interested in the fluidity of sexuality, gender, and faith. Interests also include fostering cats and talking to houseplants.

C N Lester is a multi-genre musician, author of the critically acclaimed book Trans Like Me, artistic director of Transpose, and trans feminist researcher, educator, and activist. Words and music at BBC Radio 3 and 4, SBS, The Guardian, and at the Sydney Opera House. They’re currently working on their next album and next book.

Nat Raha is a poet and activist-scholar, based in Edinburgh, Scotland. Her third book of poems is of sirens, body & faultiness, (Boiler House Press, 2018). Her creative and critical writing has recently appeared in MAP Magazine, Transgender Marxism, and We Want It All: An Anthology of Radical Trans Poetics. She’s currently co-writing a book on transfeminism.