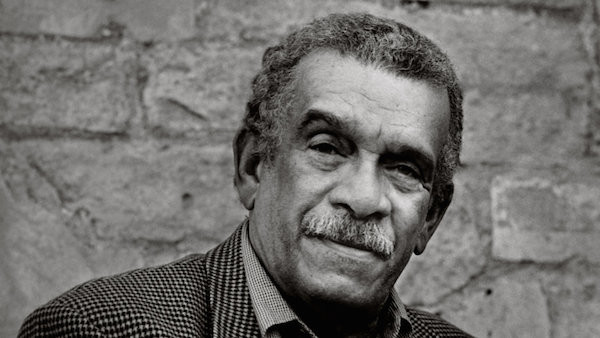 Louis James was Walcott’s guest on his visit to Trinidad in 1973, discussing issues of Caribbean poetry, and watching the Little Carib Theatre group rehearse one of Walcott’s plays. Their contact was renewed in 1989, when Walcott attended a conference at the University of Kent in Canterbury, and previewed his forthcoming Omeros (1990).

Derek Alton Walcott, poet, dramatist and painter, died in his home near Gros Islet, St Lucia on March 17, 2017. Although his many international awards and distinctions included the Nobel Prize for Literature, a O.B.E., and a Guggenheim Fellowship from the United States, Walcott’s unchanging loyalty remained to the small Caribbean island of his birth. The opening section of his verse autobiography, Another Life (1973), was entitled ‘The Divided Child’. St Lucia had repeatedly changed hands between France and England in its colonial period, leaving African presences from its slave past competing with two European cultures. Walcott, who described himself as ‘divided to the vein’, inherited both African and European blood from his parents, grew up a Methodist in a dominantly Catholic society, knowing both the essentials classics of Greece, Rome and Britain and local folk tales, speaking equally the English of the classroom and the patois of the streets.

Small island life can intensify cultural influences, and Walcott grew up immersed in the European arts. His father, a civil servant, poet and artist, died when Walcott and his twin brother Roderick were only a year old, leaving Derek feeling a commitment to fulfil his father’s foreshortened life. His mother, a schoolteacher and member of the local amateur drama group, encouraged her son’s intellectual curiosity, while a family friend, Harold Simmons, a St Lucian painter versed in both the European arts and local folklore, taught Derek to draw, and gave him free range of his extensive library of books and classical records.

The wave of Caribbean writers that emerged after the Second World War typically began their careers only on reaching Europe or America: exceptionally, Walcott remained in the Caribbean until the late nineteen-seventies, and in 1948, with money borrowed from his mother, himself published locally and sold his first slim volume of verse. In 1950 he and his twin brother formed the St Lucia Arts Guild. For this he wrote and produced Henri Christophe, a somewhat stilted historical epic on the ex-slave of the Haitian Revolution who attempted to build an empire with a splendour to rival the European, but was overthrown by his own people. More successful was The Sea at Dauphin (1954), produced the year after his graduation from the University of the West Indies, Jamaica.

If this was over-influenced by John Millington Synge, Walcott found his own voice in 1957 with Ti-Jean and his Brothers. In this version of a St Lucian legend, three brothers are tested by the devil: only the youngest, by using his native wits, survives.  The play took its form from Caribbean popular theatre, using a  narrator alongside local songs, music and dance, but making the demon both the traditional ‘Papa Bois’, and the White Planter of St Lucian history.

In 1959 Walcott moved to the cosmopolitan world of Port-of-Spain, Trinidad, where he formed the Little Carib Theatre Movement, later named the Trinidad Theatre Workshop. I have vivid memories of being with Walcott and watching a scene evolve as the group of talented local actors improvised on his script. Besides the resources of Caribbean folk culture, Walcott explored other models of popular theatre: the Marxist theatre of Berthold Brecht, and the Japanese Noh plays. These became assimilated into Dream of Monkey Mountain (1967) a parable of the psychic wounds left by slavery and colonial dependence. In a dream sequences Makak, an impoverished negro charcoal burner, faces temptations to either take revenge on his white oppressors, or turn to follow ‘that rage for whiteness that does drive niggers mad.’ Makak loses control and beheads the white goddess. But in the epilogue, he overcomes the traumas of racial identity and rediscovers his essential self.  Walcott’s other plays include O Babylon!, on the Jamaican Rastafarian moment; and Remembrance, a prose drama involving the Trinidad Black Power uprising of 1970. Taking the form of a Broadway musical, The Joker of Seville successfully drew on the vitality of Trinidad Carnival to recreate Tirso de Molina’s Spanish version of the Don Juan story.

Walcott’s plays were staged internationally, including a performance of his stage adaptation of The Odyssey by Royal Shakespeare Company in 1993. But Walcott increasingly explored the masks and contradiction of Caribbean identity through a succession of volumes of verse, including The Star-Apple Kingdom (1979), The Fortunate Traveller (1981) and Midsummer (1984). As Caribbean verse, these attracted hostility from critics who saw Walcott exploring imperialist culture, instead of developing the resources of Caribbean Creole, as did Kamau Brathwaite, who wrote in the Caribbean ‘mother languages’. But Walcott who, unlike most of his detractors, had remained in the Caribbean, and written dramas in Creole, argued against the dangers of remaining culturally enslaved in the colonial past. In Another Life, he satirised ‘those who charge tickets/ for another free ride on the middle passage … who explain to the peasant why he is African …’

Walcott also used European works to reassess colonialism. From the eighteenth-century English ‘classics’, which characteristically explored society, Walcott chose Defoe’s study of human isolation, Robinson Crusoe. In The Castaway and other Poems (1965), this became the basis for poems on the predicament of the Caribbean island poet, and his task of renaming his world. In his fine two-handed play Pantomime (1976), Crusoe and Friday become reimagined in Harry Trewe, an English expatiate island hotel-owner, and his servant, the calypsonian Jackson Phillip. By enacting the Crusoe story in pantomime, they reach a new understanding of their relationship.

Out of the Greek classics Walcott chose Homer, a Greek poet of the 9th century B.C., of whom nothing is known, and who wrote before the establishment of classical models. Deconstructing Homer’s modern name, ‘Omeros’, into ‘homo’ (mankind), ‘os’ (human bone) and ‘la mer’, (the sea), Walcott meditates on the essence of humanity. One line of his narrative focuses inwards, exploring the lives of a group of St Lucian peasant villagers. The other describes his own personal life, travelling among the peoples and cultures of America and Europe. Both journeys come together within the poet’s expanding consciousness, and Walcott’s travels across human cultures in space and time, become grounded in the voyage into self-identity of his simple, heroic island villagers.

Omeros reopened Walcott’s early argument with V.S. Naipaul, who had claimed that ‘nothing was created in the Caribbean.’ In response, Walcott asserted that this emptiness was precisely the source of Caribbean imaginative genius, pointing to the way that in Carnival its impoverished people create fantastic worlds out of little other than their imaginations, and make folk orchestras out of discarded oil drums. For Walcott, Caribbean peoples, unencumbered by historical monuments, lie open to the infinite resources of the human spirit; lacking commercial development, their island landscapes are shaped by green nature.

Walcott’s poetry is itself grounded in the natural world. Omeros alone refers to over thirty species of birds, to many varieties of trees, plants and flowers, beside other St Lucian wild life, exploring their local names and significance. Even traveling abroad to see classical art, nature intrudes: viewing art treasures in Venice, he comments that he preferred ‘not the statues, but the bird in the statue’s hair’. He privileges common life, declaring that ‘it is the ordinariness that is the miracle, that is worth recording.’

In 1999 Walcott spoke of the moment, when, at a memorial for Lorca, he heard of the death of Ted Hughes, and suddenly realised that he now felt no distance existed between his friend and the earlier Spanish poet: Hughes stood outside time ‘because of a kind of immortality in the work that is there, the beauty of the work that is there.’  Now the same is true of Derek Walcott.