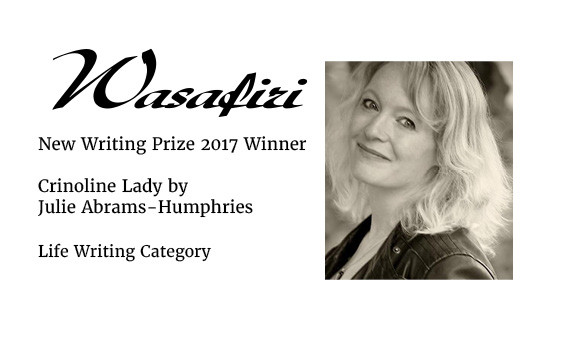 By Julie Abrams-Humphries on October 20, 2017 in Articles

It was 3.30pm on a winter’s day. I heard a scream and pushed open the door. The floral curtains were wide open in our bay window. If Dad had been home, the curtains would have been drawn, he didn’t like people to stare in. He wouldn’t have liked what they could see on that dull day, my mother standing bare-chested in the middle of the front room her arms outstretched like she was about to take a dive off a very high platform, or a cliff, and her head tilted upwards so dark hair rippled down her back. Black hair on white skin. Snow White. Blood Red. Her shoulder blades sharp like angel wings, small, red marks on her arms and back, chest thrust forwards to the mirror as if she were lashed to the mast of a ship in the eye of a storm. Something glistened in her right hand, she pushed the fingers so hard into the soft white skin of her left arm I thought they would come out the other side. Small drops dripped on the rag rug, there was the light, metallic waft of fresh blood. Mother’s face was framed in the mirror, her eyes were closed and her red lipstick mouth open, her arms taut, her breasts hidden by the crinoline skirts of the painted lady.

That mirror had been above the sideboard for as long as I could remember. It hung from its dull chain, static against the woodchip. The bottom edge was painted with a garden in gaudy colours, an arch of roses and a lady in layers and layers of painted yellow silk, a huge crinoline skirt that settled over the flowers. A hat and parasol hid her face. When I was little Mother hiked me to her shoulder and we told stories to the mirror. The lady was a princess of course, the garden, a magic garden she glided through. We laughed at our two reflected faces and wondered if the lady was smiling with us. At night I dreamed my mother was an angel and flew into the mirror to dance with the lady in crinoline. I watched my mother tilt her hand again and make fresh marks on her skin. I am frightened. A spot above my left eyebrow begins to pulse with a sharp, knife thrust of pain.

Aunty Frida sees me staring from the doorway. She flashes across the front room faster than a Spitfire, pushes me into the tiny hall and pulls the door shut behind her.

‘Go to your room,’ she hisses, ‘Now!’ I hammer up the stairs of our house in Whythenshawe, my feet tripping on the thin carpet and run into my mother’s room instead where I sit cross-legged on the double bed and ruck up her pink satin quilt, pulling my socks up to my knees and pinching the skin behind them making tiny red marks with my nails. I thought it was something I had done. That morning we had made potato prints in the back kitchen, she showed me how to carve a shape into half a spud and press it into the flour, water and food dye we had mixed. Red dye, red blood, cochineal, ‘Its crushed from beetle shells,’ she said. In summer my mother would crush the ants that dared to march across her lino. She’d kneel beside them on the kitchen floor and press her finger one at a time over their black bodies until they were all squished, a dead ant line. For years she would talk about the ants obsessively, she would see ants everywhere, crawling up her mirror, along the window ledge, on her dresser. I got off the bed and took her tin of Lily of the Valley talc from the dresser and sprinkled a line of white beneath the window. That would halt the ants, but to my mother, their encroach was as endless and unstoppable, as the black sparks in her mind.

She had always been different.

‘Giddy Kipper’ Aunty Frida called her. I thought that a silly fish, imagined Mother swimming along the creek at the end of the road, spinning and sparkling under the lily pads. She had a mind to laugh loudly and quickly like a child. Like me. We laughed together on Saturday mornings at the Ritz, laughed at the Harold Lloyd slapstick, so loud people would turn and stare. Let them. She was a free spirit who cycled to work, her skirt tucked in her knickers, at Crumpsalls biscuit factory. ‘The only eight-hour-day biscuit factory in England.’ She would come home with paper bags of broken biscuits for me and my sister Annie. Dad liked them dunked in his tea. He was the quiet one. They were a ‘golden couple’ Aunty Frida said. Dad had fair hair, fine and thin that shone in the sunshine, that’s what I thought she meant. Mother’s hair was black.

They sent me away after the incident in front of the crinoline Lady.

The children’s home was next to the Marine Boating lake. Not quite the sea, but almost. It was a many-roomed Victorian building. I was in the boy’s dormitory on the top floor. Annie, my sister, was in the West Wing, a floor below. We met over porridge at breakfast. Annie pushed hers around the bowl.

‘She locked herself in the wardrobe once you know.’ I knew. It was Dad who sent me to my room then. I had to stay there until the doctor came. I didn’t like the porridge. Dad made good porridge at home, with yellow-topped milk from the milkman. Soft and creamy with a little sugar on top. I put my spoon down.

When Aunty Frida came to visit, she was wearing a blue cardigan and a skirt that was too tight. She had a new perm, her tight curls covered by a pink chiffon scarf. She looked a little like Mum, but not as pretty.

‘Your mother’s not too well, but I’m sure she’ll be better soon and then you can both come home.’

‘Visiting your mum before her next treatment. He’ll come next week.’

‘How many sleeps?’ I said. My sister answered for her.

‘She’ll be having electric shock therapy.’

‘They attach wires to the head and fasten her down to the bed with big leather belts.’ Dad had a big leather belt. He threatened to take it off once, take it to me when I was late home for tea. Too busy playing stick boats in the stream at the end of our road.

‘I ought to beat you good and proper, I ought to beat you right into next week for making your mum worry like that.’ He said. His face was red, red as Snow’s White’s apple in my story book. My face turned red too, I shook at the idea, ready to pop like a firework. He didn’t beat me, never did. I pushed the sausages away.

There were five other boys in my room. Some cried, some screamed in their sleep. I was silent. The boy next to me wet the bed and lay there, giggling. I could smell it. Like cold fish on a Friday. I wet the bed too. It kept me warm, until it chilled into a cold clinging sheet. Matron shouted at us in the morning. I wondered if Mum wet the bed when they gave her the treatment. Another boy told me all the patients did.

‘My brother had it after the war. They strapped him down good and proper, but he said he still danced like a puppet and weed himself twice over.’ I hoped Mum didn’t have cold clinging sheets. I hoped she was warm.

‘They’ll have taken her to the Lancashire Lunatic Asylum.’ The boy said.

‘What’s a lunatic?’ I wondered, looking out the tiny window at the hanging moon, lunar light, lune-a-tic, shone white and bright through the dorm window. Was mother a moon angel?

We were home before Christmas. The mirror had been moved. Annie balanced on the hearth doing her hair in it, her wide skirts fluttering over the open flame.

‘Mind yourself there Annie,’ Dad said ‘You’re too close to the fire.’ Mum sat in a chair, quiet in the corner, her fingers worrying some wool. I heard her crying at night. I crept down the narrow stairs and pulled the curtains open so the big moon shone in the mirror. It hung white and bright over the crinoline lady. I stretched my arms wide and tried to fly like an angel.