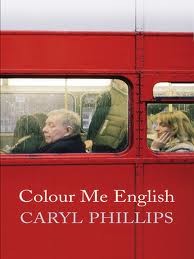 By Courttia Newland on January 17, 2015 in Articles

Caryl Phillips’ seventh collection of essays, Colour Me English, revisits the author’s chosen territories of ‘displacement, home/homelessness, race and identity’, as defined by Renée Schatteman, editor of Conversations with Caryl Phillips (2009). It is a volume heaving with insights, musings and ideology, some thirty-eight essays in all, each dissecting the notion of tribal belonging and its polar opposite, exclusion. Much of the collection details the travels Phillips has undertaken since he was first published by Faber and Faber in 1985, spanning countries as diverse as Sierra Leone, Ghana, Belgium and France. The writings also map temporal journeys; essays such as ‘Water’ go back to 1993, while others like ‘Ground Zero’ and another on the Chinese-American novelist, Ha Jin, are clearly written more recently.
From his introduction, the title essay ‘Colour Me English’, Phillips’ flowing style and obvious passion shine. This sets the tone for a series of glaringly honest accounts of experiences which shape and guide a man of letters one New York Times reviewer called ‘one of the great literary giants of our time’. In precise, measured prose Phillips recounts his schooling at an all-boys grammar school in the centre of Leeds, as one of the only black boys until the arrival of his younger brothers. Then comes Ali, a ‘moon-faced brown boy in a brand new school blazer’, and thirty pairs of eyes take in this ‘oriental apparition’. The taunts soon follow, Phillips taking part in his schoolmates’ antagonism until they accost Ali on the bus home from school. He encourages the boy to report the incident to a member of staff. Of course, nothing is done, and this apathetic response from someone who could have played a supportive role renders Phillips and Ali exposed. They retreat into their former shells, do not speak to each other for the remainder of their school lives. This particularising of the disenfranchised, the humanisation of unseen life, makes way for a broader discussion later in the essay, that of Islamic immigration into European borders, the radicalisation of the 7/7 bombers and the reasons young Muslims might feel ambivalence towards the country they reluctantly call home.
At the close of the essay, Phillips states that he ‘believes passionately in the moral capacity of fiction to wrench us out of our ideological burrows’. At that point I was fully with him. I was roused, eager for what might follow. Yet while I appreciate the honesty and skill of the remaining essays, I was disappointed by their omissions, frustrated by Philips’ failure to escape his own ideological burrows.
The publisher’s blurb for Colour Me English asks, ‘What do we mean by “English”?’ The title betrays a desire to wrestle with the notion of what it means to be a Caribbean immigrant, of African heritage, brought up in England. From a personal standpoint Phillips manages this admirably. He speaks of his decision, in 1978, to go to the United States, where he encounters Richard Wright’s Native Son and decides to write about African Americans. In ‘Northern Soul’, ‘Necessary Journeys’ and ‘Rude am I in my Speech’, he speaks repeatedly of his own disillusion with England. In a section named ‘Overtures’, he pays due homage to Black British literary forebears E. R. Braithwaite and the luminary John La Rose. But these writings are in the minority, and out of thirty-eight essays, only nine are concerned with Britain and its inhabitants, literary or otherwise, in the main or even remotely. It’s an omission I found startling in a collection titled as it is.
There is little Critical engagement with modern Britain; with the third generation of Caribbean descent, to whom Phillips gives fleeting mention as ‘commendably brash’, or those who came after, have become global icons, groundbreakers, rioters. Little mention of second generation South Asians today, or West Asians, or Africans and Europeans from across the continents, the myriad races and cultures of multicultural Britain. No white indigenous English, some of whom feel they’ve been infringed upon, or others who feel comfortable with relatively new arrivals. It might be true that twenty years of US living inspired his section on America, instead of, maybe, an examination of the rigours of being déraciné –uprooted from your natural environment – for Black Britons, what that might mean for our artistic output. I may be attempting to shoehorn Phillips in line with my own concerns, but for a collection with such a provocative title, such expectations are justified. Caryl Phillips is one of our literary greats, of that there is no doubt. If he wishes to continue writing about British identity he may be forced to stretch beyond his post-colonial notions, and engage with the country we have become, alongside what we were.
–
Colour Me English
Caryl Phillips
Harvill Secker, London, 2011, pb
352pp  ISBN 1 8465 5305 9  £14.99
www.randomhouse.co.uk/editions/imprint/harvill-secker
—
Courttia Newland’s six books include The Scholar, Society Within, Music for the Off-Keyand A Book of Blues. He co-edited IC3: The Penguin Book of New Black Writing in Britainand has also written plays and screenplays.
Share this...