Review: Luka and the Fire of Life by Salman Rushdie 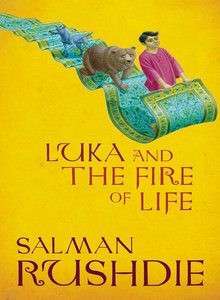 By Beverley Naidoo on January 17, 2015 in Articles

Storytellers are magicians. Twenty years after publication of his entrancing Haroun and the Sea of Stories, Salman Rushdie has created a sequel in Luka and the Fire of Life. Once again, Rushdie has dipped his cup into the Ocean of the Streams of Story to produce a tale of classic quest in which it is Haroun’s younger brother Luka who must now venture into the World of Magic to save their famous storyteller father Rashid Khalifa, the Shah of Blah.

Each young protagonist has to deal with forces aiming to destroy their father and the magic of storytelling. Haroun’s tale – written by Rushdie for his elder son while in hiding from shadowy yet all too believable assassins armed with Ayatollah Khomeini’s fatwa – was a defiant achievement by the real-life storyteller magician. Its theme was freedom of imagination and speech; its setting timeless.

In contrast, left-handed Luka’s quest, created by an older Rushdie for his younger son, is markedly twenty-first century, framed within the shifting levels of computer games in which scores are saved, lives are lost or acquired, and parallel worlds are commonplace. The journey that young Luka must make with faithful Dog (a bear) and Bear (a dog) derives from a bountiful imagination. With Rashid Khalida having fallen into a big sleep and his life rapidly draining away, twelve-year-old Luka is led across an invisible border by a see-through Nobodaddy, his father’s ‘would-be nemesis’. The more Nobodaddy gains substance, the more desperate is Luka’s race against Time in the World of Magic to steal the Fire of Life that will save his father back in the Real World.

Among the plethora of mythological and contemporary characters encountered along the vast River of Time is the invaluable Insultana of Ott on her flying carpet (once King Solomon’s). A splendid teenage redhead, named Soraya like his mother, she comes to Luka’s rescue with her Otters – from the land of Oh-Tee-Tee – against the occupants of the Respectorate who ‘take Offence very sharply indeed’. Needless to say, their excess of respect threatens to strangle the whole World of Magic.

Before Luka’s final challenge in capturing the Fire of Life, he must exhort an army of ‘discarded divinities’ to recognise their reliance on his storyteller father: ‘Wake up and smell the coffee, old-timers! You’re extinct!’ Unless they help him destroy the formidable hooded Aalim, who control Time itself, the ex-gods’ magic goose will have been cooked. Ultimately, in fairytale fashion, Luka succeeds, and with his father saved he can return to his role as youngest in his happy family, free to laugh, dance and sing, at least for the time being.

Readers not familiar with Haroun and the Sea of Stories might well feel overwhelmed by the compressed backstory – a challenge in any sequel. In Haroun, we see more of Rashid Khalifa and the son–father relationship. Haroun’s admiration mixed with irritation makes for a more ‘real’ boy. In contrast, Luka is flatter while his father, although the fulcrum of the story, remains for much of the time a rather distant, philosophical presence, refracted through Luka’s memory.

Rushdie’s language dazzles in a sustained pyrotechnic display ranging from esoteric references to corny puns. Occasionally the crackers of wordplay, sparking names and spinning asides made me contemplate the possibility of an Exploding Brain ready to plunge into a Sorry Whirlpool. (Pardon the Capitals but they are catching.) I began to wonder whether our teller might fear Time’s winged chariot himself, with so much still to say and a relatively short fable in which to say it. This is a tale best read by adult and child together, with two wits, old and young, combining to tease out the many threads and jokes.

In the years between Rushdie’s pair of fables, another humanist, Philip Pullman, published His Dark Materials, a trilogy about two young people who, crossing between parallel worlds, square up to an overarching, overreaching power intent on silencing independent thought. While Pullman’s hugely intelligent work has drawn the ire of fundamentalist Christians, albeit without threats to his life, it remains centrally a coming-of-age story. A former teacher, Pullman always remains tuned to his young protagonists’ hearts and heads.

With Luka’s tale, I have my doubts in this respect. Whether fable or novel, all stories have to mesmerise us so that we lose ourselves in them before we admire the teller’s skills. I lost myself in the magic of Haroun’s quest but I suspect that it’s the magician’s wizardry that I shall remember here more than young Luka and his journey.

Luka and the Fire of Life
Salman Rushdie

Beverley Naidoo joined the resistance to apartheid as a student in South Africa, leading to detention without trial and exile. She has worked as a teacher, education adviser and writer in Britain, and holds a PhD (Southampton) for research into white teenagers’ responses to literature and racism. Her novel Journey to Jo’burg, originally banned in South Africa, has now celebrated its 25th anniversary. Her many awards include the Carnegie Medal for The Other Side of Truth, and most recently the Children’s Africana Honor Book Award for Burn My Heart, set in 1950s’ Kenya. She was co-editor with Shereen Pandit of Wasafiri’s New Generations: Writing for Young Children and Adults.