Exclusive Extract: Between Beirut and the Moon by Naji Bakhti 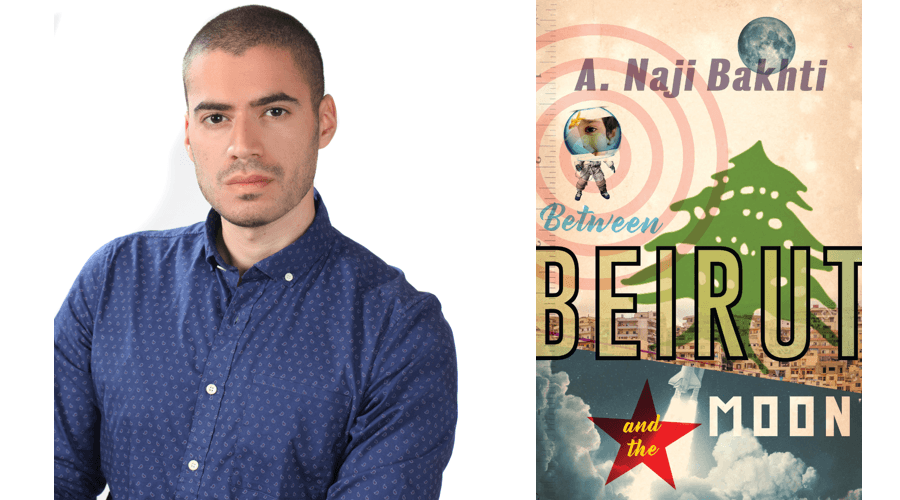 That night I snuck out of the house and walked for half an hour to Ramlet AlBayda. It was the only public sandy shore left in Beirut, courtesy of the warlords who ran the country after the end of the civil war. The other bits had been either privatized or wiped out altogether in favor of a Movenpick, a Four Seasons or a Phoenicia. On one side of the Phoenicia stood the St. George Hotel, or what was left of it. The war had been particularly cruel to the St. George, perhaps because it was located at the heart of West Beirut, a predominantly Muslim part of the city. On the other side of the Phoenica stood an abandoned, shell pocked former Holliday Inn building known for its distinct view overlooking Beirut and, Grandfather Adam swore, parts of Nicosia. It was used during the war as an outpost for snipers in what my mother and father referred to as ‘The Battle of the Hotels’. The Muslims fought the Christians, and the Christians fought the Muslims, and the Christians fought the Christians, and the Muslims fought the Muslims over the complete control of a hotel or two in the name of their respective gods who, in turns, forsook them and forgave them their sins. The Palestinians, the Syrians and the Israelis too contributed to the dirtying of the bed sheets. I held my breath, Beirut fell silent, and I heard the towering Holliday Inn building wheeze. And I heard Basil cough and swear.

‘Two snipers. One king size bed,’ said Basil, elbows dug securely in the sand and cigarette swinging up and down between his lips.

‘A tale about love and war brought to you by the makers of A Room with a View.’

Basil chortled and dropped his Gauloises. He buried it in the sand then took another one out of the packet.

‘My father smokes so many of these, he doesn’t notice when entire packets go missing. He’s a social smoker in the same way that you’re an astronaut,’ he said, offering me one and lighting his own.

‘I want to go to the moon,’ I said, taking the now warmish Almaza from the plastic bag and popping open the bottle cap using Basil’s lighter, ‘tastes like piss.’

Almaza was the national beer before Lebanon was an independent country. There used to be this running ad on Tele Leban which featured the transparent green Almaza bottle on a table with a constantly changing background. It was my first lesson in history. ‘I was here when you got your independence in ‘43, and we celebrated,’ said a deep, reassuring, if slightly patronizing, voice, ‘I was here during the earthquake of ’56, when Georgina Rizk was voted Miss World in ‘71, when you plunged the country into civil war and we hid, and when it was over and we celebrated. Whatever happens, we celebrate.’ Heineken bought it not long after that.

‘Get your own beer and lighter then,’ said Basil, snatching both away from me and taking a sip of Almaza, ‘What’s on the moon anyway?’

‘Not anything. It’s a desert. Go to Saudi Arabia.’

This was not the first time a desert had been suggested to me as an alternative to the moon. My father had made a similar suggestion a number of years back, except instead of Saudi Arabia, he chose the Sahara. Basil ran his index finger through the flames of his lighter as we both lay on our backs looking up at the towering skyscrapers behind us. He did this more out of habit than for entertainment purposes.

‘It was a desert too, before all the skyscrapers.’

‘No. I’m just saying Dubai was a desert.’

‘Listen, habibi, when NASA gives you that application form, lead with this. ‘Dear NASA,’ said Basil, now putting on a voice with a higher pitch than his own, ‘the moon reminds me a bit of Dubai.’’

I flicked a used needle away from my elbow and spread my arms out. Ramlet ElBayda, or White Sands, was littered with them.

When I closed my eyes, I did not see Armstrong’s moon landing or Sagan’s Cosmos, Moore’s Atlas of the Universe or Aldrin’s Reaching for the Moon. I saw Saint-Exupery’s Sahara Desert with the little prince. I saw Monsieur Mermier on asteroid B-612. I saw him watering the rose, cleaning out the volcanoes, pulling up the baobabs. I saw him holding the prince’s sheep in a box and watching forty-four sunsets in one day.

I followed a beam of light as it guided boats to the old ports of Beirut, we breathed in the stench of dead fish and listened to the waves wash them ashore. This new lighthouse had been built recently after seaside residents complained that the beam of light from the old one would enter their bedrooms and keep them awake at night. It looked like a rocket. The old lighthouse which was thinner and taller and cloaked in black and white hoops was now too far away from the sea to effectively guide anyone.

As I pressed my knuckles against the sand, in an attempt to sit up, I heard laughter in between the waves.

Three Christian girls, the crosses around their necks glimmering in the moonlight, walked hand in hand towards us. They kicked at the waves and pushed and pulled at each other. The blonde one lost her balance and fell into the water.

‘Its water. Get over it,’ said Christabelle.

‘She can’t get over it,’ shouted Basil in their direction, ‘its Gucci and Gabbana.’

The third one, who most resembled a mermaid with her wet hair, thin torso and wide hips, laughed with one hand on her mouth.

‘It’s Dolce and Gabbana,’ said the Blonde one, as the three girls approached us.

In the light of the skyscrapers, the girls looked like women. The youngest of them, the mermaid, would have been about eighteen but even she had the glow of a woman about her as she stood over us.

‘This one is a mute,’ said the Blonde, pointing her finger in my direction.

‘I guess,’ I said, now looking straight at them.

‘Look at those eyelashes, Christa,’ said the Blonde, waiving her French manicured nails about, ‘I’d kill to have those eyelashes. And those thick eyebrows.’

‘He’ll make a handsome one, once he grows into that face,’ said the mermaid.

Basil took a sip of the piss warm Almaza and the mermaid snatched the bottle away.

‘It’s bad for you,’ she said, tipping the rest of the beer down her throat.

‘And needles aren’t?’ said Christabelle, laughing through her full lips.

‘This one’s the real heartbreaker, aren’t you?’ said the Blonde, now looking at Basil.

‘There’s only one way to find out,’ said Basil, smiling without revealing his teeth.

All three women laughed at this. He had a knack for saying funny things at the right moment, or else for saying things in a way which made them sound funny at any given moment. The mermaid grabbed Basil by the wrist and led him to the edge of water. She jumped head first into a strong wave as it crashed against the shore, wrenching him forward. She reappeared splashing her tail against the waves and flicking her wet hair behind her, signaling for the girls to join in. They did, even the Blonde. I stood there with my toes dug firmly into the sand. They swam away and I could barely make out their shapes in the moonlight.

‘Christa,’ I shouted, cupping my hands so that my voice would carry further, ‘you’re the most beautiful one.’

Basil dragged himself back to shore, coughing and wheezing. He was still a goat-worshiping mountain boy at heart and the sea did not agree with him…

Born and raised in Beirut, Naji Bakhti graduated from the American University of Beirut (Lebanon, 2011). He recently obtained a PhD in Creative Writing from Lancaster University. Between Beirut and the Moon, published by Influx Press, is his first book. Purchase it here.