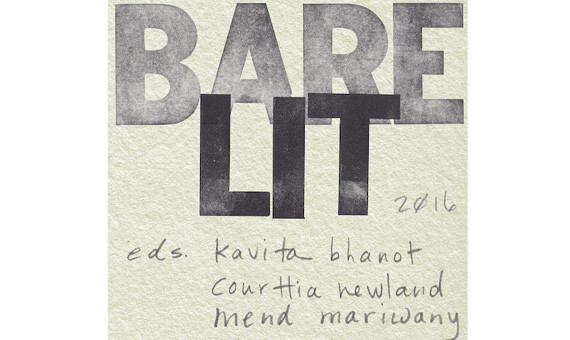 On the one hand, it’s a shame that a book such as the Bare Lit anthology is necessary. Its very existence shows that the mainstream publishing industry risks making itself culturally irrelevant if it continues its present trajectory of passing over writers of colour. On the other hand, it is a vital that such a book exists because it acts as a kind of index of cultural independence and emblem of innovation within the publishing industry which has been slow to recognise the sheer scope, talent and value of BAME writers.

In that way, the book is an act of resistance. Bare Lit the anthology came out of the activities of the Bare Lit festival which started in 2016. Founded by producers of colour to showcase writers of colour, the Bare Lit festival was a direct response to writing agency Spread the Word’s Writing the Future report in 2015. The report surveyed writers, literary agents, mainstream and independent publishers, finding that three of the UK’s largest literature festivals featured only 4% of writers of colour. By the same token, despite the few international authors of colour on the bill, most British literary festivals attract a predominantly white and middle class audience, perhaps reflecting the paucity of visible stories that speak directly to a BAME experience and therefore an increased BAME audience. Of that 4% of writers, many reported being obliged to address diversity while their own work was sidelined. The Bare Lit anthology, with its combination of poems and stories, is an extension of the stance of the festival, where writers of colour are presented on their own terms, free of the strictures of the publishing industry’s myopia. As such, it’s a form of literary activism.

The editors, Kavita Bhanot, Courttia Newland and Mend Mariwany, set out their literature-as-the political stall in uncompromising terms. They want to know: “Does literature in its essence challenge the idea of the ‘other’? Or has literature always played a part in the ‘othering’ that is at the heart of such racism and supremacy?” A poem like Raymond Antrobus’ ‘Two Days and Two Nights in Kisumu’ – although not fully realised in its ambition to reveal the English language’s colonial provenances and legacies – tries to grapple with these questions in a more overt way:

Dan, the Kenyan teacher, drives me to the airport
past Lake Victoria.
I ask him if he knows
the name of that lake
before 1858.
He says, I could tell you
but it has no meaning in English.

But it’s clear from the introduction and crucially, from the selection of prose and poetry that the intention for this anthology is to push beyond the easy to reach for tropes that characterise mainstream publishing’s perceptions of what literature by writers of colour should be. One of the most remarkable and surprising things about this anthology is that it also represents the first time that many readers (including this reviewer) would have heard of several of the seventeen writers featured which in itself carries the point the editors want to make. These are very accomplished writers, some of who have been writing for many years, have won major awards and have been published in organs such as the Wall Street Journal or the New York Times. These are also writers whose cultural identities cut a huge swathe across the world – they are African, Asian, Caribbean and Arabic…. so why are they not more visible? Possibly because they have been ‘othered’ and so too has their literature.

Poetry and prose in the same book can sometimes make for uncomfortable bedfellows. While I don’t believe the editors have struck quite the right balance – the book is weighted in favour of prose in terms of volume and number of writers represented – it is thrilling to see just how many experimental pieces that are neither prose nor poetry there are in the book. Irfan Masters’ ‘Samo as Everybody Else’ is a real stand-out in this regard because it is a fantastically layered poem (to my mind it leans more towards poetry than prose). It is at once a homage to the artist Jean-Michel Basquiat, a diatribe against institutionalised mental health care, a portrait of a young man wrestling with race, identity and self-determination and an example of writing that isn’t afraid to take hi-jinks risks with content, form and typographical signifiers. There is great experimentation within the prose too. Vera Chok’s ‘Gannet’ is a cross between the narrative drive of prose and the ability of poetry to depict the experiential, to contain several moments in the same small space. And it doesn’t stop there – Sharmilla Chauhan’s ‘Aya’ experiments with a tale of gender role-reversal set in India to engrossing and thought-provoking effect.

But not all the stories and poetry land their mark. Stories that contain dialogue are conspicuous by their short supply while others make sudden leaps of tone that make the reader start thinking about the nuts and bolts of the telling rather than the tale itself. Some poems melt away before they have fully excavated their potential and others state the obvious and don’t merit the space they have been given. It must be said though that these mis-steps are mostly made by the less experienced writers.

A book such as this makes it abundantly evident that there are many different kinds of Englands refracted through the intersectional gazes of so-called ‘others’. The writers hold up a mirror, to what will be to many readers, unfamiliar aspects of the country: Koye Oyedeji’s ‘Postscript from the Black Atlantic’ manages to weave Yoruba mythology into a depiction of one man’s guilt-ridden descent into madness in a lonely flat in London; Martin de Mello’s ‘Shitluck’ is an astonishingly incendiary, stream-of-consciousness tale set in Manchester; Tendai Huchu’s ‘Banjo on the Motorway’, notwithstanding the tinge of deus ex machina in its conclusion, is a narrative that traverses the roads of northern England. Characters grapple with depression, relationships of all kinds, self-image, abortion, immigration status, madness, fashion, art, crime, femininity…. essentially the kind of themes and issues that affect everybody regardless of their race, gender, status, sexuality, religion etc. As society in Britain changes and moves forward, it adds more and diverse voices to its population but this is accompanied by an undercurrent of fear and anxiety directed towards people who are minorities. This slim-ish volume, which can be consumed in an afternoon, goes some way to countering that.

The Bare Lit anthology is published by Brain Mill Press.