By Wasafiri Editor on March 17, 2022 in New Writing Prize, Poetry

Wasafiri is proud to publish the shortlisted works of the 2021 Queen Mary Wasafiri New Writing Prize. These poems, essays, and short stories detail a range of emotions and experiences, produced by skilled emerging writers from all over the globe. In this rhythmic, haunting poem, Asmaa Jama considers the body of their grandfather, mourning and celebrating his life, and meditating on the way family members love and lose each other.

at the end, my grandfather is somehow still together, bones and loose flesh, splayed viscera
in a plane seat, he arrives at our home like a decorated war vet, except he has only survived
himself, except no nation now wants him, except he has only battled against the tide
and has lost every time, except he is missing all of his hair and most of his teeth

and when i see him i collapse into my own shadow, and our house becomes filled with
bodies again for the funeral

except this time, i reconstruct his image, i hand over my packaged skin, my viscera, and
my grandfather takes an almost alive shape

and we attend the funeral together, already there is oil being spilt into the ground, which
is just the zaytun’s way of mourning him, and after eating pickled chillies, we drink until
our insides cool

at dawn this time i perform his autopsy, i place my hand into the palace of his skin, and
find, in its lines, the intestines, that have swollen into small galaxies, pregnant lengths

and i write them odes, i write them fragile odes, somehow spilling ink onto his body,
somehow pressing words, like chosen, and once-loved

and the word for forgiveness and the word for blessing remain the same, and there is a
slow rain that falls over his body, which is really the earth washing him, as i tuck him away
like he is spilt taffeta, and my hands are rippling

and then i go to dig at the earth until it at last opens, and then i wrap him in cloth, and
then we press our foreheads to his ground, which is everywhere, and later the clouds part

and all my syllables are half-torn by grief, and my prayer returns to me, asking to be sewn
together to be made more coherent things, except i have no utterances for god only gestures

i raise my palm to my chest, i place a finger to my head, and my ocular bone, and all the
places, that ripple and turn water

i want for better things, for peace, i want for smaller things, for a semblance of a grave
stone, for one more missed call and the sound of his voice, for misbegotten
camel hide

i ask again for his solid body, for malachite strong fingers, for a will to continue, and even
my grandfather tired of my trope, tired of returning in a wearisome body, sends smaller
creatures, green amphibians, dark silent millipedes, at last a single goldfish

after you crossed the water, i lost your face, pale photograph in a well 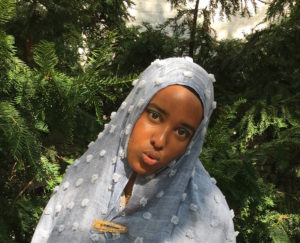 Asmaa Jama is a Danish-born Somali artist, poet and co-founder of Dhaqan Collective, a feminist art collective. They have been published in print and online in places like Ambit, ANMLY and The Good Journal. Asmaa’s work has been translated into French, Swahili, Somali, Spanish and Portuguese. Most recently they were shortlisted for the Brunel African Poetry Prize and longlisted for the National Poetry Competition. Asmaa is an inaugural alumni of Obsidian Foundation, and a Cave Canem ‘Star Shine and Clay’ Fellow.