An interview with Amaal Said 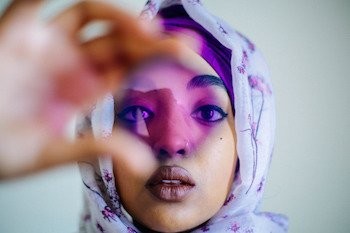 “I’m a Danish-born Somali girl who calls London a home. I chose poetry, or poetry chose me. I’m so interested in the ways we can heal ourselves from trauma and also in how we can make new lives for ourselves after tragedy. Sometimes I think of myself as some sort of archivist, documenting an interpretation of my loved ones. I would write to get away from where I was and sometimes from myself. I’m a Barbican Young poet and I’m part of the Octavia poetry collective too and I’m so grateful for being a part of a community of writers.”

1. Tell us about how you got into writing?
I’m the oldest of Somali immigrant parents. I was a young girl writing about things I was apparently too young to understand. I listened to the long distance phone calls back home that my parents would make and I always felt too much. I  thought of myself as different, an outsider and so writing it all down made sense to me. I had Blogspot to begin with and then I moved onto Tumblr. I started spilling the family secrets and there were people who sent me messages about how they related. I couldn’t believe it. Perhaps it was a way to survive or maybe I was just lonely. Probably both.
2. What was the inspiration for your winning competition entry?
I went back to Denmark in the summer of 2014. Most of it was a blur. But I was thinking about how much of my childhood in Denmark I had blocked out and I thought about the trip back. I remembered the drunk Somali man on the top floor of my aunt’s block of flats in Odense. I found out much later that he got married for a short while. It ended because he couldn’t give up the alcohol. You could hear him climbing down the stairs and he’d chase the children. My aunt lives on the bottom floor and my cousin climbs out when he’s scared of the noise. He heard the screams once and jumped out the window without shoes. I thought, ‘ah, he’s found an escape route so early.’
3. How has winning the prize changed your approach to writing or your plans?
I was very sure I’d never write another poem again before the prize. I was tired of my voice. I didn’t feel what I was writing. I also didn’t think I was being honest enough. There were so many excuses. But the prize reminded me I wasn’t done. I just slowed down and I made excuses for myself. I said things like, ‘it’s ok if you’re not writing today. You’re sad’ and ‘it’ll come back later’. I found new ways to forgive myself. The recognition was also incredible.
4. What are you working on right now?
I’m thinking about my poetry collection and what I want it to look and sound like. I haven’t approached the manuscript in a year or so and I’m frightened I’ll hate everything I’ve ever written and will want to start again. I’m also a photographer and I’m dabbling in film, so I’m thinking about how to bring all of these mediums together. I don’t know how yet, but I know I want to document my parent’s stories. My dad said something like, ‘you’re going to tell my story, right?’ I think about that all the time.
5. What advice do you have for people entering this year?
Most of what first comes to mind is about separating your worth from any outcome. But I hope you told the truth and felt lighter because of it. That’s always been the important (and the hardest) thing for me.
Share this...