An Extract from 정 by S J Kim 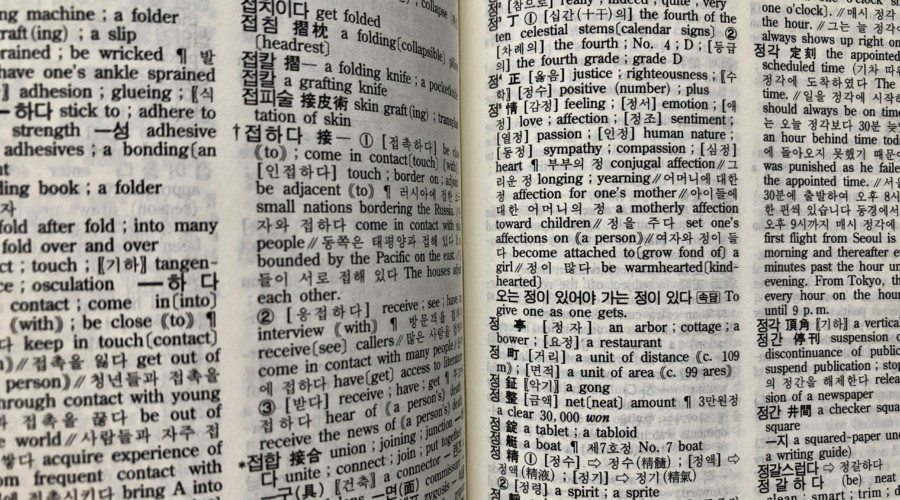 By Wasafiri Editor on October 4, 2021 in extracts, life writing

S J Kim was born in Korea and raised in the American South, and is a Lecturer in Creative and Critical Writing at Birkbeck College, University of London. In this poetic extract that stretches the boundaries of the essay form, Kim writes powerfully and candidly about the reality of work and survival in academia. Kim resists the institution’s definitions of research and productivity, instead seeking out the ‘untranslatability’ of certain Korean words and names. Caught between the language of her childhood and the language of the institution, this untranslatability becomes a mode of repair, and of resistance.

Download the full essay free until the end of October, or purchase Wasafiri 107: Crisis/Recovery.

Before my still-new job, I used to go home for the summer to help my parents at their ice cream store. My dad has a bad knee. He has to work the store alone most days because my mom has developed a hand tremor. And there is, too, the fact that my mother is shrinking.1 Not in some fairytale way.2 Something to do with old age and bone density, something to do with how, when and where she was growing up, red meat was as precious as gold.3 I should have become a doctor, the life-saving and good-money-making kind.

정 is a self-diagnosis of a need to interrogate my first-generation Korean-American identity as a means to survive British academia. ‘I don’t understand why,’ my Department Head says, ‘you are struggling so much to do what is an essential part of the job.’ In light of a global pandemic, we are holding my research meeting on Skype. Research meetings are primarily about the REF and what I am producing for the REF.4 I am not doing a good job of staying on topic. I am not doing a good job of holding my space. I am crying. ‘I’m sorry,’ I say, ‘I’m just so tired.’ 정 has many symptoms, one such being 몸살.

I need to produce a six-thousand-word essay based on my doctoral research. I am recovering from what I must assume is just a cold and I am having a difficult time comprehending what is this space I am occupying, precisely, professionally. In this space, we are three heads: my Department Head, my REF Head, and my head bobbing in and out as I reach for tissues. I am wondering if the sound of me blowing my nose is made grosser by the faint static and echo, the strange resonance of WiFi, as gross as I feel. Our connections keep acting up and/or cutting out. I am wondering if I heard right, my Department Head asking me if the issue is that I don’t actually want to do research, that I don’t actually want to write. Why else would I not be able to produce a six-thousand-word essay? (I feel we must be speaking in tongues. I have grown so tired of the salted taste of my own snot.) My REF Head is quiet. None of us want to be here, at this time, projecting and enunciating for the camera.

I am lucky to have my position on three-year probation: a full-time permanent contract that accounts for research. Theoretically, I am paid, in part, to write. As an Early Career Researcher, I am minimally tasked to produce one REF-able output for my institution. The REF-ability of a piece of output is measured by the output’s IMPACT. I am told that the short scholarly article I have to my name is nice, but not REF-able because it is too short. The length of one’s output is perhaps related to IMPACT. I need a REF-able output that will earn many stars for IMPACT,5 or I’m not quite sure what would happen to me. I am threatened by the reality that junior academics like me are often forced onto what is known as teaching-only contracts. ‘Teaching’, I’m starting to understand, is something of a dirty word in academia. It is a festering open secret that a teaching-only contract classes one as a second-rate academic.

‘Book’, on the other hand, is beloved. A book makes for an excellent REF-able output. A book is double-weighted. A book counts twice.

If 정 is a book, it would be 33,333 words long, divided equally into three sections:

i. Going forward, I
ii. would (strongly; use this word as necessary) encourage
iii. you to

The untranslatability of 정 is often mentioned as an integral part of Korean culture.

정 asserts that English is multiplicitous and at its best in symbiosis with another language.

정 approaches fragmentation as a means of mending my broken Korean through my practice of English.

I was born in Seoul and immigrated to rural North Carolina at the age of seven. I was meant to learn English from my second-generation cousins who told me I used bad words because I went to public school with black kids. My cousins said: black kids say words like shut up and H-E-DOUBLE-HOCKEY-STICKS. My cousins said: black kids are going to hell. (It’s okay to say hell when you need to state that black kids are going to hell; this part is silent.) My aunt liked to beat me whenever she felt my parents were ripping her off for looking after me. My uncle liked to watch. When my parents were working too late to come pick me up, he was the one to drive me home. Sometimes, at the end of our silent ride, he would tell me without looking at me: you need to learn when to shut your mouth, you need to learn to be less selfish.

I hold a PhD in the New Southern Gothic from The University of Manchester, where I studied under white men who praised my ability to write a black voice. But is it really saleable to write about the Civil War, the KKK? they posed. Why is there an ice cream store in the swamp? Life in the New South wasn’t all that bad. Have you watched Gone with the Wind? Have you read Faulkner? Have you tried writing Korean stories?

The New Southern Gothic is a flimsy phrase. What I mean is that I read Yusef Komunyakaa’s Neon Vernacular as a study of the southern gothic in solidarity with the Black Lives Matter movement. What I mean is that I did try reading Faulkner and O’Connor and all those good country people and sure as heck they sure are great, but I just didn’t want to lie for tens of thousands of words about such writers speaking profoundly to what home means to me. What I mean is that sometime in the late nineties or possibly early two thousands, when I was much too young for Komunyakaa’s words, if I hadn’t by pure chance asked my mother if I could buy this book of poetry 1. because the cover had a quiet buzzing silver & gold & bronze muted by a wash of sickly green, a somehow loving and somehow angry collage of city life between the gold & bronze full of more jagged cars than good city people, a half-blind eye at the centre of it all, with the hands of time protruding from the pupil and 2. because the author’s name seemed just as strange if not stranger than mine in these united states,6 I may never have started writing my first novel about an ice cream store built shortly after the American Civil War because I needed to better understand how home feels to me. 정 is home.

1 And of my mother’s many dreams, one was that I would grow to be my father’s height, approximately 5’7”, but I am approximately 5 inches short and I didn’t get into Harvard.

2 If I was writing a fairytale, I would write about how my mother can touch fire, hold it to her fingers. I would title it, 독한년.

4 In the UK, the Research Excellence Framework (REF) determines how public funding for research is allocated.

6 I have learned to hold my Korean name close in fear of old hurts from when I was young. When I could better read Komunyakaa’s words, I was entering my twenties. It was the summer I fell in love with a grown woman from New York. Beneath the frenetic markings for my doctoral thesis, I can still make out the sections I marked to share with her from ‘Songs for My Father’ and ‘Faith Healer.’

Download the full essay ‘정’ by S J Kim free until the end of October, or purchase Wasafiri 107: Crisis/Recovery.