Harriet’s Party: An Excerpt from ‘Love Marriage’ by Monica Ali 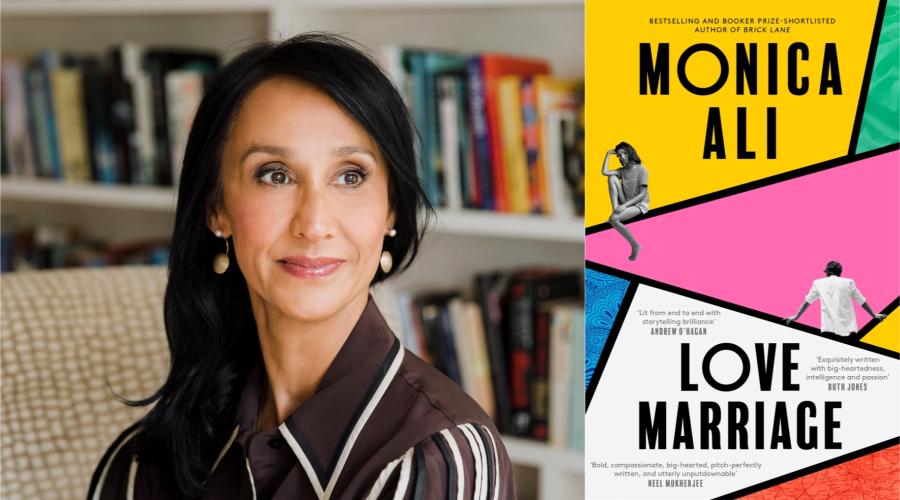 By Wasafiri Editor on March 1, 2022 in Fiction, extracts

To celebrate the launch of Wasafiri 109, read an extract from Monica Ali’s Love Marriage (2021, Virago Books), a warm and tender novel that examines the ways in which class, race, and culture intersect in contemporary Britain.

In a way, she envied the waiters, busy with their trays of canapés and bowl food — tuna poke, pea and mint risotto and shepherd’s pies. There was a knack to circulating at parties and it was one she didn’t possess. Yasmin stood with Ma and Flame. Ma wore her most dazzling sari, cream silk with a gold border and a gold choli that was perhaps a little tight under the arms. Her hair was coiled and piled high on her head, studded with diamanté grips.

‘Namaste,’ said a guest, pressing her hands together and bowing slightly as she passed by. Ma beamed at the woman, an alumnus from her cookery class. Flame whispered something in Ma’s ear and they both started laughing. ‘She was trying to be friendly,’ said Yasmin. She accepted another glass of champagne.

‘Bit harsh,’ mumbled Yasmin, although she remembered how irritated she’d been at Harriet’s gala dinner when the woman sat next to her just assumed she was a Hindu.

Flame wore sharp black trousers and a heavily beaded mermaid-green blouse, which she had bought on a charity shop trip with Ma. It was the kind of thing Anisah, with her magpie instincts, might pick for herself and look terrible in, but it looked good on Flame. Ma had started using bright red lipstick, like Flame’s, not every day, but often enough, surely, for Flame to notice she’d started copying her.

‘Mm,’ said Yasmin. Was Flame a mind-reader? ‘Strong red, strong lips, strong woman,’ Flame declared. ‘I will cut my hair,’ said Ma, touching, just barely, a soft brown finger to Flame’s head. ‘I will cut it short like yours.’ She laughed. ‘Come upstairs with me,’ said Flame. ‘I’ll do it. I’ll do it right now.’ She sounded impatient and terse, as if irritated by Ma’s teasing. Ma just laughed. ‘Okay, you go and I will follow.’ Flame slunk off immediately, with Ma rolling behind her. Yasmin decided to sit down somewhere. The sitting room had been mostly cleared of furniture so she retreated with a bowl of risotto and more champagne to the lavishly cushioned window seat to observe the party. She considered, briefly, the possibility that Flame would hack off Ma’s hair, but Ma would never go that far for the sake of whatever joke it was they had running between them.

Harriet, who had broken her habitual monochrome with a pleated silver skirt and oxblood blouse, steered Joe from one clot of guests to another, a hand pressed to the small of his back, ever vigilant. Like his bodyguard, thought Yasmin.

It would be different when they were married. She’d stop being so stupid, so stupidly insecure. Pepperdine said she acted like a child. How dare he? He was forty-six and he’d never been married. She’d gone to his office, the first day he returned to work after Christmas. I’ve lost my ring, have you found it? Blue sapphire with diamonds on a platinum band. I’m afraid not. How unfortunate. Nothing else to say. Nothing.

She’d given him the cold shoulder since then and he pretended not to notice. He treated her as normal. She didn’t care. She’d be moving on soon anyway, to a cardiac unit in another hospital.

The save the date cards were in a drawer in Joe’s bedroom. She made sure she took all of them. We can’t send them out, she said, until things are back to normal. Joe agreed. There’s too much uncertainty, we can’t plan a wedding while my parents are separated. Joe understood. While my dad is estranged from my brother. Joe totally got it. And we have to tell my mother and yours what we’ve decided and make them accept that it’s up to us. We will, said Joe. He was so good. So understanding. He’d even consoled her about losing the ring. It took all her powers of persuasion to stop him buying a replacement. I’ll find it, she said, it’ll turn up. But it wouldn’t. She just knew it would not.

Harriet materialised out of the crowd, holding out her hands. ‘There you are, Yasmin! You mustn’t be a wallflower.’

Harriet deposited her with Joe, who looked relieved to see her. ‘Here she is, as promised darling,’ said Harriet. ‘I must fly.’

‘Alan’s extolling the virtues of Brexit.’ Joe wrapped his arm around Yasmin and whispered in her ear.

‘The problem with the academic left…’ Alan wagged a finger.

‘I thought we were the metropolitan elite.’ The woman on the receiving end of his finger was short and stout with an unkempt mane and inquisitive face. Like a Shetland pony, thought Yasmin.

‘Whatever.’ Alan wore a collarless shirt and a moss-green baker-boy cap. He liked to wag his finger as he made his points. ‘You shout racism and play identity politics and ordinary people are sick and tired of being accused of being bigots. Also —’

‘Why don’t we listen to some other voices.’ The pony-woman gave Yasmin a meaningful look.

Joe’s fingers tightened on her waist. ‘You’re supposed to be the other voice,’ he said quietly, just to her. ‘I’m a bit drunk,’ she whispered back.

‘Voting Leave doesn’t make you a racist,’ said Alan. ‘If you feel uncomfortable because English is becoming a foreign language in your own town, your kids’ school, doesn’t mean you’re prejudiced. It’s not about race, it’s about culture and belonging. If you feel you don’t belong in your own country that’s a problem. Right?’

‘Why don’t we ask Yasmin how her community voted?’ said Sophie. Yasmin gave her a little smile. Baba voted for Brexit, she and Arif voted against. Did Ma even vote? What was her community? Would Mr Hartley count? What should she say?

‘As a white man,’ said Sophie, giving up on Yasmin, ‘do you think you have the authority to speak about racism?’

‘As a rich woman,’ said Alan, ‘do you think you have the authority to speak about the working class?’

‘How much do you think academics get paid?’

‘Middle class, then,’ said Alan. ‘Class trumps race. Doesn’t matter what colour you are, it’s how much money you have, the job you do, the circles you move in…Yasmin, you’re a doctor. Let’s hear what you think.’

She tried to look thoughtful. But he wasn’t asking her as a doctor. He was asking her as a brown person. An expert. An undeniable authority on issues of race. Alan and Sophie were looking at her, wanting their views legitimated: by the representative of brown-skinned people, of immigrants, of outsiders, or perhaps of insiders but newly minted and therefore doubly loyal, if not loyal then ungrateful or seeking advantage from mere skin colour…It was making her head ache…it was so much easier dealing with people like Mrs Rowland and telling them to get stuffed…although that hadn’t worked out so well in the end.

Monica Ali is a bestselling writer whose work has been translated into twenty-six languages. She is the author of five books: Brick Lane, Alentejo Blue, In the Kitchen, Untold Story, and Love Marriage. She has been nominated for, amongst others, the Booker Prize, the George Orwell Prize, and the Commonwealth Writers’ Prize.