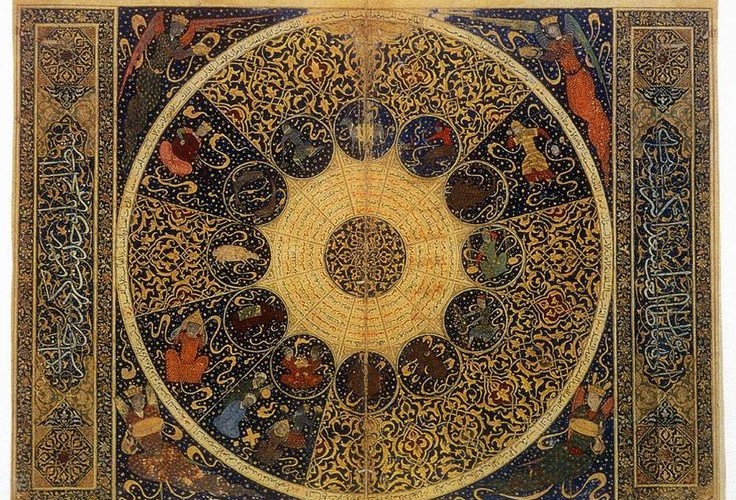 By Wasafiri Editor on June 24, 2022 in New Writing Prize, Poetry

Wasafiri is proud to publish the shortlisted works of the 2021 Queen Mary Wasafiri New Writing Prize. These poems, essays, and short stories detail a range of emotions and experiences, produced by skilled new writers from all over the globe. In this poem, Shereen Leanne weaves the mythic and contemporary to interrogate the act of storytelling, and the complex weight of heritage.

there are palm fronds of wallpaper peeling
into whispered green along the terraced house on
a birmingham street, where almost-shahrazad
is prising out a story from the painting on the wall.

outside the rain falls quiet when she begins
and puddles into colours of a sigh. but in the frame
three horses riding through the desert stop,
as their three riders wonder how they
lost

the baghdad road and ended up reversing
the oasis to the only pause of sand for miles
in a dim-brick rainchorus of overflowing
drains. almost-shahrazad sits cross-legged

on a carpet that stubbornly refuses to fly,
even though its wingspan would make
an albatross’s eyes spin red with envy.
her brother sits there too, after being exiled

from the land of the other room for interrupting
coffee-table-talk by folding coke cans into
smaller smaller strips of sugared glints.
over in the corner, the persians and the arabs

are at war again over the black-white noise
of towli: the emir and the hakawati hunch
over the board, hurling languages at counters
as they cross on pilgrimage.

of reins drawing landscapes into palms.
yalah, he called, and the word folded up the …’

‘how long’s this storeee gonna be?’

‘what’s wrong with my story?’

‘nuffin, yeh, but your stoooooreees
are always soooo loooong’

‘well how long should it be, genie-ass?’

‘how long’s a piece of storee-string?’

‘double the length from the mid-
dle to the far edge of its tapestry,
baradare kuchulu’

the hakawati leans over to see
what al and almost-shahrazad are
spitting stars over, sending a musing tide
to navy down the sparks of their argument.

‘my neffew, nazar, he painted this’

so the quarrellers pause with their
(s)words drawn to trace how the ooo of
the hakwati’s nephew blows the dust in a muttering
rise about the horses’ hooves, sweeping

a broom of rusted storms into the faces
of the three lost men. and as the sand
sticks to the creases of his breath,
these shards of desert split his syllables in

to a solar calendar, charting out the evening
into fades of light…but an unfinished game
will always keep the hakawati from finishing
his tale, and soon his war resumes.

‘ok ok go on i’m half-listenin. What are
the bros lookin for agen?’


‘The other horses! From the first
painting!’

almost-shahrazad deep-breathes, knowing
that she cannot answer this without returning
to the source of the tigris, climbing their
ancestral palm to replant dates now

wrinkled with the weight of generations.
she cannot answer this without retracing steps
through stories that were told when they were
each no more than a possibility in the world,

stardust furled on an astronomer’s map,
waiting for collisions between planetary
bodies to turn visions into children
and innocence to wisdom…

Shereen Leanne was born and raised with the rhymes and concrete chimes of Birmingham. She is currently an unsettled guest on xwməθkwəy̓əm (Musqueam) territory where she is a PhD student in comparative literature at the University of British Columbia and a Peer Supporter with The Support Network for Indigenous Women and Women of Colour. Her poetry takes shape out of a responsibility to pass ancestral stories on by exploring life between borders as a child of Iraqi and Iranian parents.

Cover photo via WikiCommons, under the Creative Commons Licence.