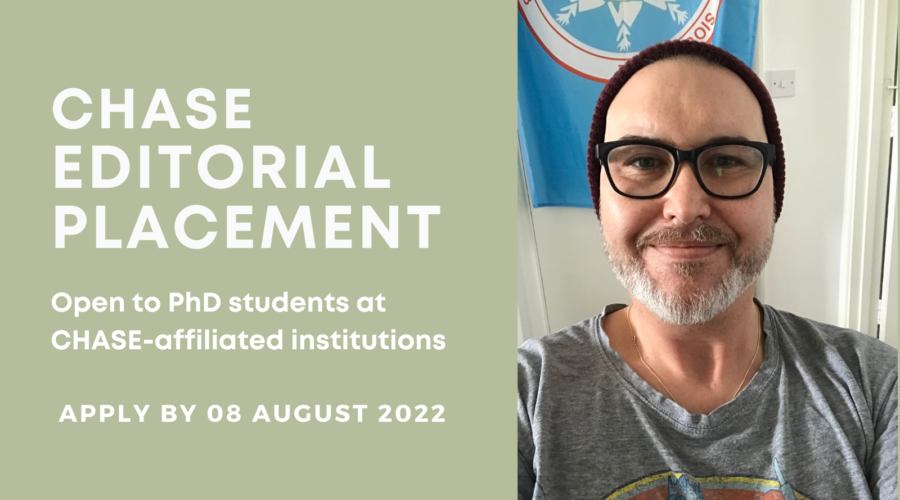 Over the past five years, Wasafiri has had the privilege of working with PhD students on a CHASE placement to provide them valuable experience in the field of academic and literary publishing. Each intern has had the opportunity to become involved in the workings of the magazine, and to bring their own interests and unique ideas to the role. In this interview, Wasafiri sits down with current editorial intern Jack Rutherford to talk about his time at Wasafiri, what he’s learned, and what he thinks the placement can offer prospective applicants.

Wasafiri is currently accepting applications for a PhD student at a CHASE-affiliated institution to join the magazine in September as the new editorial intern. Find out more about the position, and apply, here.

Wasafiri: What’s your academic specialisation, and what drove you to apply for a placement at Wasafiri?

Jack Rutherford: I have a background which covers social sciences, history, and visual cultures of indigenous peoples, with a particular focus on the Western and Native American film. Similarly, Wasafiri operates across a broad spectrum, whilst also being specialist and unique, which I found appealing. Their work on issues like decolonizing, and participation in discussions of inclusion, representation, and so forth, made me feel I could engage with a platform which is actually making a contribution to these debates.

What do you think sets Wasafiri apart from other literary and academic journals?

Building on the last question, it is progressive and innovative. I recently attended the English: Shared Futures (a literary conference in Manchester) and it was interesting to note that the present academic discussions on education were raised in an edition of Wasafiri from the mid 1980s!

What have you enjoyed most, or found most fulfilling, about the placement at Wasafiri?

The fleeting, intimate moments — the time in the office with colleagues or a chance to grab a tea or coffee with one of the team. I have spent a lot of time just taking things in, and it has been wonderful being a part of it. I will always hold my time there fondly in my memory.

How do you think your time at Wasafiri will help you, moving forward in your career? What will you take with you?

I feel it has helped bridge the gap between PhD and academic publishing; most scholars will have to have some form of interaction with academic publishing — it’s inevitable. I now know what writing ‘looks like’ post-PhD and what I need to do for my own journal submissions as well as turning the thesis into a monograph. I have also secured an interview at another journal, which I feel is directly a result of my experience at Wasafiri.

What would your advice be to the next editorial intern on making the most of the placement?

I was a little intimidated by the CHASE interns before me, and I was worried that I wouldn’t be able to emulate them; in time, I realised that I was able to build on what they had done before me, and I grew in confidence by finding systems of working which I was comfortable with and, hopefully, have done some good whilst I have been here!

And finally, what are you reading right now?

I am reading, as ever, about a million books, but I am taken by Outlawed by Anna North. It’s a Western which plays with the myth of the West in US history and culture by offering a feminist perspective. Critics and scholars often say the Western is dead, but it has so much scope. I think, in terms of box office returns, something like six of the top ten of the highest grossing Westerns came this century, and films such as Brokeback Mountain and The Rider offer alternative narratives which break the ‘classic’ template. The Western is still hugely influential, isn’t going anywhere, and is an important cultural text which is taking representation in narrative fiction in really interesting directions.

Jack Rutherford received his PhD from University of Essex. His thesis considers representations of Native Americans in film. Jack also teaches in the Department of Literature, Film, and Theatre Studies and is an Assistant Fellow of the Higher Education Academy.

Like the sound of a placement with Wasafiri? Apply to be our next intern here. You can also can read Erum Dahar’s blog on his time at Wasafiri here.