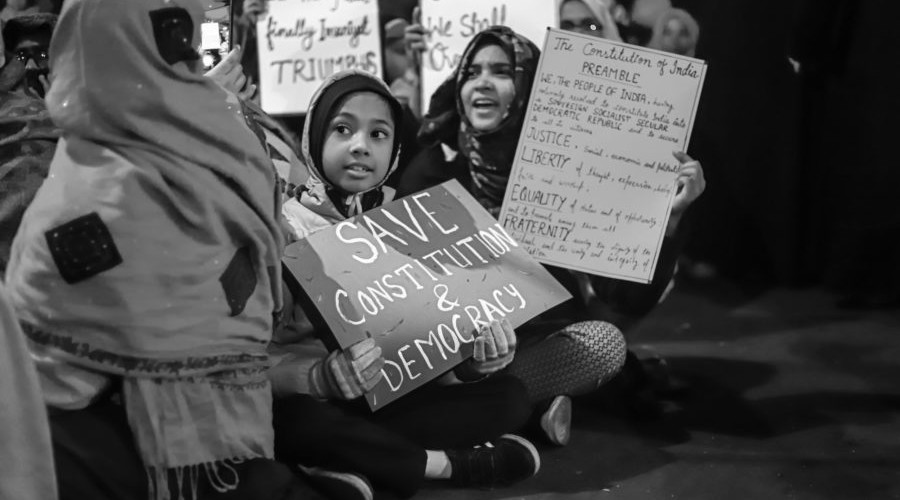 By Wasafiri Editor on March 15, 2022 in Articles, Global Dispatches

In the latest of Wasafiri‘s  Global Dispatches series, Dr Swati Arora reflects on CA Davids’ essay, answering with a piece that examines India’s growing Hindu supremacy, the communal language of protest, and how the state’s rhetoric around the Covid-19 pandemic can shore up systems of oppression.

This smells like memories, said my friend V, when I made her cardamom tea.

Crush cardamom pods to a coarse powder and add to a pan of boiling water, let it simmer for a minute as the aroma diffuses. A teaspoon of tea leaves and a dash of milk. Sugar to taste and a quick boil. Pour it through a sieve into your favourite mug. Serve hot. Just like my mother makes it.

I made tea when V came over – in the stolen time between lockdowns – and we sat by the bay window, next to my recently purchased yucca, as the sun went down.

Before the pandemic, I rarely used the hob to make tea; living and working in the UK for a decade altered my habits when I discovered the electric kettle and exchanged taste for convenience. When repeated lockdowns over 2020 delayed my plans for going home indefinitely, I desperately looked for ways to recreate home in my small flat. I remembered the art of cooking tea on the hob and found myself crushing cardamom pods twice a day, like a ritual, diligently.

The essay on justice by CA Davids made me reflect on the idea of home: its affective, intangible, intimate aspects, as well as alternative forms of relation through we which we commune with each other. Covid-19 only deepened my sense of extreme spatial and socio-political dislocation, as the place I call home had become increasingly turbulent in the preceding months.

The crises of 2020 were not unprecedented; the resurgence of worldwide Black Lives Matter protests during spring registered a refusal of a hierarchical world where ‘normal’ is marked by anti-Black violence, heteropatriarchy, ableism, and racialised capitalism. They were a resolute demand for the abolition of the carceral state that continues to discriminate against minoritised communities. The racialised responses to the origins of Covid-19 in Wuhan, China reinforced the existing social and geopolitical othering in our public lives. The global pandemic merely provided a ‘reckoning’, writes Dionne Brand, highlighting the brutal calculus of life and death that determines who is denied presence and visibility in public spaces, and who has a safe place they can call home.

For some, ‘home is the mouth of a shark’ that makes living impossible, Warsan Shire reminds us. They go looking to build another home across the sea. An inflatable dinghy, not an aeroplane, is their one chance of survival. The UK’s border regimes continue to separate families, while its economy demands that migrant frontline staff keep working during the pandemic. Paradigms of global mobility are violent towards Black and minoritised communities and are inextricably connected to inequality and injustice.

Back in India, violence against Muslims and Dalits intensifies as the government pushes its Hindu nationalist agenda onto the country. On 5 August 2019, ten days before the official celebrations of Independence Day, India annexed Kashmir and imposed an internet shutdown in the valley that lasted an entire year. A historically fractious relationship between two territories was permanently scarred by a sudden, illegal occupation of Kashmir by the ‘postcolony’ that prides itself for attaining azadi (freedom) from the colonial rule of the British empire. Soon after, the Supreme Court concretised the religious agenda of the nation by ruling in favour of the construction of a Hindu Ram temple in Ayodhya, at the site where the Babri Mosque had been demolished by an organised mob of Hindu nationalists in 1992.

In December 2019 the controversial Citizenship (Amendment) Act (CAA), passed by the Parliament of India and approved by the President, made dangerous alterations to the Citizenship Act of 1955. The CAA creates a fast-track to Indian citizenship for undocumented migrants from Pakistan, Afghanistan, and Bangladesh, but specifically excludes Muslims from applying. The drive to systematically exclude Muslims from Indian citizenship had been ongoing, since the implementation of the National Register of Citizens (NRC) in Assam and including the impending National Population Register (NPR). In open defiance of Article 14 of the Constitution, the authorities conducted multiple arrests of dissenting journalists and student activists. CAA, NRC, and NPR come with an added requirement concerning written documentation and puts Indian Muslims on the same footing as undocumented migrants. The new legislation threatens to make them homeless.

Soon after the CAA was passed in Parliament in December 2019, protests erupted inside the campuses of Jamia Milia Islamia (JMI), Jawaharlal Nehru University in Delhi, and Aligarh Muslim University in the neighbouring state of Uttar Pradesh. Three days of protests were followed by police atrocities on the JMI campus, intensifying the nature and scale of the existing civil insurgency in other parts of India. As the wave of solidarity travelled far and wide in the country, a peaceful sit-in was set up three kilometres from JMI, in the middle of a highway that connects Delhi to Noida (a commercial hub in Uttar Pradesh). This protest site was called Shaheen Bagh and was organised by local elderly Muslim women who articulated a new language of resistance and political infrastructure rooted in care and community. The dadis and nanis (grannies) of Shaheen Bagh assembled at this site every day for 101 days in the winter of 2019 to 2020, day and night, taking turns to watch over children and cook food, braving the brutal Delhi winter and threats by police, before Covid-19 regulations prohibited public assembly in large numbers. Shaheen Bagh became the epicentre of nationwide protests and inspired similar peaceful sit-ins in other corners of Delhi and in cities like Bangalore and Kolkata.

Carving out a space on a highway, the women of Shaheen Bagh served food and tea to all visitors. They wrote and recited their own poetry. Creating an alternate home on a different altitude, their gendered labour of caretaking served a radical purpose. I think of Toni Morrison’s words in Song of Solomon: ‘Without ever leaving the ground, she could fly’. They sat on troubled ground – while suspended on a highway in mid-air – for three months but their songs of revolution flew far and wide, inviting solidarities from across the globe.

The highway, as a space of grounding, gave rise to an alternate sociality. Cutting across differences of caste, class, religion, age, and ethnicity, the Shaheen Bagh protest invited people from all backgrounds. To express solidarity, Chandrashekhar Azad Ravan – president of Dalit rights organisation the Bhim Army – held the Constitution of India in his hands and posed in front of the historical Jama Mosque to represent a Dalit-Muslim alliance against growing Hindu supremacy. Shaheen Bagh, as a site and a movement, allowed for forms of relation and world-making that undermined ethno-nationalist systems of legibility and control.

In this context of rebellion, the pandemic became an excuse for policing undesirable bodies on the street. People who are poor, Black, and those who belong to oppressed castes and minority religions, are easy targets for police violence and incarceration everywhere. After the Shaheen Bagh protest was forcefully dispersed in March 2020, migrant labourers from across the informal sector in India felt abandoned by the sudden announcement of a three-week lockdown. Without a source of income to pay rent or buy food in metropolitan cities, and with the complete shutdown of all public transport, millions of labourers had to walk thousands of miles to return home to their villages. They risked starvation and death and had no other choice but to be out on the streets; they had nowhere to take shelter as home was out of sight. To go home was illegal. Rich people could afford to be obedient, while poor people had no choice but to break the rules.

As someone from a privileged caste and class background, I remain tethered to a colonising nation-state while my solidarities and commitments defy that logic of citizenship and belonging. With another Covid-19 upsurge in April 2021, Delhi’s crematoriums ran out of capacity and thousands died due to lack of healthcare. The dead were laid down in makeshift funeral pyres in parks while the leader of the country spent millions to build himself a new Central Vista. My home is on fire, and I watch it burn on my screen in London.

Thirty months and counting, I have not been able to fly home to visit family. I have attended two funerals and a wedding on Zoom. Time keeps moving and yet everything feels static.

As we ride out more waves and yet more variants, what variations of kinship and community do we create, and how can solidarity persist and resist beyond borders? The churning continues — what is animated, what is allowed to perish, and what can emerge from the flames?

Swati Arora is a Lecturer in Performance and Global South Studies at Queen Mary, University of London. Her work engages with the intersections of performance and visual culture, feminist theory, Black Studies, and dramaturgies of urban life. Most recently, she published ‘A manifesto to decentre theatre and performance studies’ in Studies in Theatre and Performance (STP, 2021).