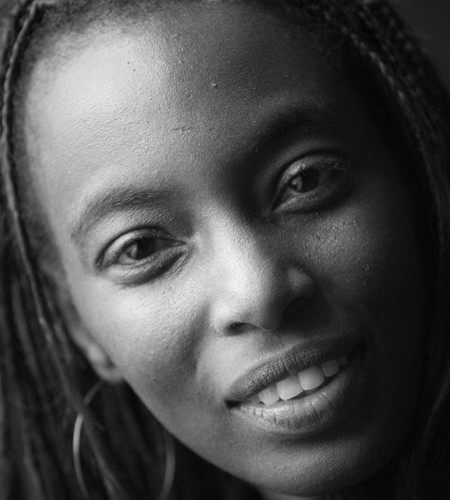 Yvonne Adhiambo Owuor was born in Nairobi, Kenya and educated at the Kenyatta University, the University of Reading and the University of Queensland. She won the 2003 Caine Prize for African Writing for the short story ‘Weight of Whispers’, which the BBC described as a ‘… subtle and suggestive work of fiction that dramatises the condition of refugees.’ She was the Executive Director of the Zanzibar International Film Festival from 2003 to 2005. Her writing has appeared in numerous publications worldwide including Kwani? and McSweeney’s. Her story ‘The Knife Grinder’s Tale’ has been made into a short film. She now lives in Nairobi.
She is the author of the widely acclaimed novel Dust, which has received glowing reviews since its publication in 2014.
This conversation took place in two sessions over the course of three months via Google Chat.
Emmanuel Iduma: When I finished reading Dust, I wrote that it brought an excitement and a brokenness I cannot yet name. How do you suggest I deal with that?

Yvonne Adhiambo Owuor: [Smiles] It would be very interesting to see where the emotion takes you …

EI: I think I want to make a film, even if it’s the only narrative film I make in my life. I know this sounds stupendously impressionable, but until another book unseats this emotion, I’ll keep hoping that I can resolve the tensions by making a film of the book.

YAO: Oh Emmanuel, now you bring tears to my eyes. Thank you for that endorsement. The feeling of the story; that is what I mean. Maybe words are not useful if you are in the ‘feel’ but what is the brokenness?

EI: The brokenness is what I felt, for instance, when Nyipir knows he must return to Burma and when Wouth Ogik disintegrates. I’m the kind of person who detests nostalgia. And the book made me confront all the nostalgias of the places I’ve left and never returned to.

YAO: Saudade, the name of the Bajian club in the book, actually means ‘nostalgia’. Yet within the kingdom of nostalgia, there are unrequited ghosts. What do you do with them?

EI: You make graven images out of them! You become an artist! Like Ajany, perhaps.

YAO: Delectable sentiment. Heh, I am always startled by what a story does to its readers. Such a variety of sentiments; it is so mysterious. You do know there are those who loathe the book [smiles]. I keep saying it is just a story. But hearing you I understand that there is no ‘just’ in a story.

EI: Yes, some people must loathe it, because it’s a book about memory, about inscribing the shadows left by the past, and our first inclination when we have a terrible past is to try to forget. Can you also tell me about your relationship with visual art and artists?

YAO: Longing, yearning, incestuous; I enter art galleries the way I do cathedrals. The sensors on my skin turn to those images and consume everything. Sometimes I get a bad reaction. I once went to the Tate Modern, I saw works by a certain artist who will remain nameless. After I emerged into the daylight, I had to find a corner to collapse and – there is no polite way of saying this – vomit. We were intertwined. I sometimes see my stories as ‘painting-impressions’.

EI: Do you feel that you’re writing about art in your stories? I’d like to know if you feel moved towards art criticism.

YAO: No, not in anyway. At least, not deliberately. But maybe the characters ‒ they of free will ‒ have such orientations. Me, nope!

YAO: A different ‘calling’, I believe. The seven years of writing Dustwas about pairing down and learning the hard way that the Story Muse has his or her singular path. The story — only the story. If something else emerges, it is because The Story wanted it to be there. But having said that, I imagine every text is also imbued with one’s biases and passions and commentaries, no? Unless … thinking about this again … I suspect I ‘take pictures of life with my eyes’ — if that makes sense. Freeze and frame socio-political moments, and then proceed to examine them as if they were pieces of art — it is just possible. I must reflect on this some more.

EI: That sounds intriguing to me, being a visual artist in a roundabout way. But yes, it’s a thing of calling. Yes, the biases and passions are there. And my bias recently has been to find a way in which art criticism begins with a fictional premise, in a kind of direct way.

YAO: What led you there?

EI: Well, I’ve been studying and writing art criticism for the last two years or so. And I felt like I came to it through fiction. And perhaps because I like the word ‘agglutination’ a lot, because when I read that there was something called ficto-criticism, I thought what-the-heck that’s what I want to do.

YAO: Agglutination! The clumping! My Aga Khan University curriculum development years brought me home to the place of ‘inter-, trans-disciplinarity’. Now when I see lines and silos my inner iconoclast sets out to rub them out!

EI: And that’s what you tried to pull off with your Indian Ocean project?

YAO: Yes, I have always read maps as stories. A childhood predilection …

EI: Can you recall when you felt called to Dust?

YAO: In 2005 when Kenya was doing its ostrich head in the sand referendum.

EI: Ah. Clifton Gachagua said to me that, in Dust, you get the language and songs of the people of the north, and he doesn’t know how you did it. Well, how did you do it?

YAO: I went there. And … something like ancestral memory stirs in my soul. I know those trails. Somehow, I have an affinity ‒ should I admit to this publicly? ‒ for cattle. I can follow them.

EI: I could feel this stirring while I read. Because the English language of the book is of a different dialect. That’s what I kept thinking.

YAO: [smiles] Thank you for seeing that too. I am not from the school that says to be authentic to a place one must use the language of the place. I wondered if language, which I treat as a malleable repository, can be shaped into the geography of the place in which it finds itself, and then convey the place’s meaning in a way a place can hear and maybe understand itself.

EI: I don’t think we can authoritatively say ‘yes, this is the language of a place!’ It’s all broken and fragmented. Maybe that’s what makes your writing special; you don’t avoid the fragmentary, diffusive tendencies of language. So, where are you in your book-in-progress?

YAO: Don’t tell the muse I told you, but that last full stop is beckoning. Actually, I need to get myself to China, even for two days, to breathe in the place, inhale its scents for the final part of the book. It is two-thirds done.

EI: Do you find yourself restless to move on, to commit to a new project?

YAO: Less so now. I now get obsessed with finishing the project that is in my grasp, in order to leap onto the next one. I have a third story pounding in my head also. But I have to tell it to wait a bit.

EI: How often do you visit Kenya, or are you based there now?

YAO: I am very much grounded and rooted in Kenya now.

EI: Was there a time you desired to be ‘grounded and rooted’?

YAO: I think I am exaggerating the rootedness since Ibn Batuta is one of my icons. But I am diving deep before I surface and soar to some other strange kingdom.

EI: I see. I’m also keenly interested in how you’ve moved from ‘dust’ to ‘water’. Is fire next?

YAO: Who knows? The muse has his plans. I meekly follow [laughs]. Now that you mention it the third story is fed by fire, lots of fire. I wasn’t even aware of that.

YAO: But The Indian Ocean and I must complete our walk, first.

EI: Yes, please. It was very intriguing to read your lengthy list of acknowledgements in Dust. I think it’s the longest I’ve read. Why did you think you had to do that?

YAO: So I never have to do it again. In my culture, you acknowledge deeply and profoundly in order to secure necessary blessings for the onward journey. My next acknowledgments will probably be a single line … and then I can get away with it.

EI: Has there been any ‘political’ response to your book? Has any Kenyan politician publicly admitted to admire, or having been disturbed by the book?

YAO: A lot is said by what is not said, isn’t it? There are a few friends who are in the establishment who have whispered things to me in the form of clandestine exchanges, complete with that looking over the shoulder thing. There are those who have out rightly accused me of all sorts of nefarious things that had never crossed my mind — I think. [Smile] I have been accused of revisionism or harking to a forgotten Kenyan past — you know our national adage ‘accept and move on’ or put another way ‘bury your head in the sand and think of England’. But it does delight me that a little story can disturb so greatly amnesia’s ghosts and secrecy’s agents.

EI: I like that what you’re also saying ‒ and correct me if I’m wrong ‒ is even if people want to forget, the land does not forget. A place carries its past with it.

YAO: Exactly. Out of curiosity, which character did you like best in the book?

EI: Ah, a tough one. I wrote in my notebook that all the characters seemed to receive the same effusive attention from you. But if I have to make a choice, I would say Akai-Ma because of the sentence with which you introduce her: ‘… as if she has come from the root of the world.’

YAO: I suspected that. All Akai-Ma’s people are bonded to the book!

EI: I don’t think I’ve asked: who was your favourite character?

YAO: None of them. Perhaps the marginal ones are those I would hang out with the most —Aaron, for example. And I must confess to having a softer spot for the imp, The Trader, than for the others.