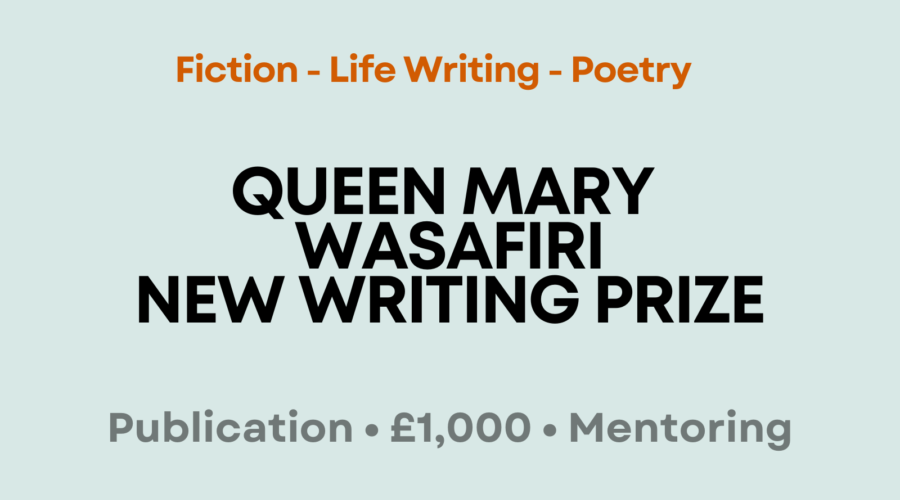 By Wasafiri Editor on January 26, 2022 in New Writing Prize

One of the most international prizes of its kind, the 2022 Queen Mary Wasafiri New Writing Prize is now open until 30 June 2022. Writers from around the world who have yet to publish a book are invited to submit in the genres of fiction, life writing, and poetry.

Winners of the prize will receive £1,000 each to support their work. All fifteen shortlisted writers will be offered mentoring and career guidance from partners The Literary Consultancy and The Good Literary Agency (dependent on eligibility). All winners of the prize, running since 2009, remain part of the Wasafiri community, and are supported by the magazine as their careers grow. Past winners and shortlistees have gone on to score deals with major international publishing houses such as Verso, Peepal Tree Press, and HarperCollins India and to be shortlisted for and win prizes including the T S Eliot Prize, Ambit Short Fiction, and Bocas Poetry Prize, among very many others.

This year’s prize is chaired by literary leading light Marina Salandy-Brown. ‘I firmly believe in the power of prizes to do more than celebrate excellence,’ Salandy-Brown comments. ‘They serve as an impetus to all writers and the Wasafiri New Writing Prize has played a critical role in the development of a whole new raft of writers. I am greatly looking forward to conferring with my wonderful judging partners and to all the new writing.’

Marina is joined on the judging panel by talented and multi-award-winning poets and authors. Mary Jean Chan, judging Poetry, remarks that ‘the Queen Mary Wasafiri New Writing Prize has always caught my attention for its focus on discovering, supporting and mentoring emerging talent across multiple genres’. Judging Fiction, Preti Taneja will be looking for work that ‘feels fully arrived in terms of its thematic ambition, its use of language and its confidence in its own voice’. And finally, Francesca Wade, on judging Life Writing, says that ‘Wasafiri has long been a brilliant home for innovative work.  I’m excited to read pieces that explore – and interrogate – the myriad possibilities of life-writing today’.

Mary Jean Chan is the author of Flèche, (Faber & Faber/ Faber USA), which won the 2019 Costa Book Award for Poetry and was shortlisted for the International Dylan Thomas Prize, the John Pollard Foundation International Poetry Prize, the Jhalak Prize, the Seamus Heaney Centre First Collection Poetry Prize, and the Lambda Literary Award. Chan is Senior Lecturer in Creative Writing (Poetry) at Oxford Brookes University and supervisor on the MSt in Creative Writing at the University of Oxford. Born and raised in Hong Kong, they currently live in Oxford.

Preti Taneja is a writer and activist. Her first novel, We That Are Young (Galley Beggar Press/Knopf), won the Desmond Elliott Prize for the UK’s best debut of the year and was listed for international awards including the Folio Prize, the Prix Jan Michalski, and the Shakti Bhatt First Book Prize. Her second book Aftermath, (Transit/ And Other Stories) has been critically acclaimed in the LA Review of Books and the New Yorker. She is a Contributing Editor at The White Review, and Professor of World Literature and Creative Writing at Newcastle University, UK.

Francesca Wade is the author of Square Haunting: Five Women, Freedom and London Between the Wars (Faber, 2020). She has received awards from the Leon Levy Center for Biography, Robert B. Silvers Foundation and Biographers Club, and is a former editor of The White Review. Her writing has appeared in the London Review of Books, Times Literary Supplement, Granta, Paris Review and other places.