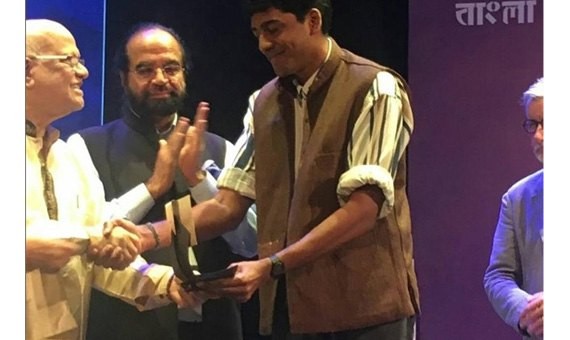 18t​h November 2017; Dhaka, Bangladesh :​ ​Anuk Arudpragasam has been announced as the winner of the prestigious ​DSC Prize for South Asian Literature 2017 for his novel, ​The Story of a Brief Marriage ​at the Dhaka Lit Fest in Bangladesh. Told in meditative, nuanced and powerful prose, this shattering novel marks the arrival of an extraordinary new literary voice. In a glittering award ceremony, the US $25,000 DSC Prize was awarded to the winner along with a unique trophy by Hon’ble Abul Maal Abdul Muhith, Minister of Finance of Bangladesh. The world’s literati including writers, publishers, media and literary enthusiasts who had gathered at the Abdul Karim Sahitya Bisharad Auditorium at the Bangla Academy for the finale event​ ​of​ ​the​ ​Dhaka​ ​Lit​ ​Fest​ ​enthusiastically​ ​applauded​ ​the​ ​winner​ ​of​ ​the​ ​DSC​ ​Prize​ ​2017.

Speaking on the occasion, ​Ritu Menon, on behalf of the jury said,​“The jury met and discussed the shortlisted novels in detail. As all the shortlisted novels had considerable strengths and remarkable literary quality, deciding the winner was not an easy task. However, the jury agreed that Anuk Arudpragasam was the best possible choice for his outstanding novel, The Story of a Brief Marriage. The novel is impressive for its intensity and rich detail, and for exploring the tragic heart of war with such quiet eloquence. It is also a testament​ ​to​ ​the​ ​redemptive​ ​power​ ​of​ ​love,​ ​and​ ​to​ ​the​ ​human​ ​spirit’s​ ​capacity​ ​for​ ​hope.”

Ahsan Akbar, Director of Dhaka Lit Fest, made the opening address and welcomed the DSC Prize to the city of Dhaka. The DSC Prize for South Asian Literature is an established international literary prize that awards the best work in South Asian fiction writing each year. This year the DSC Prize had received 60 eligible entries with participation from publishers from the South Asian region as well as from countries like the UK, the USA, Canada, Australia and South Africa amongst others. The DSC Prize for South Asian Literature which​ ​is​ ​specifically​ ​focused​ ​on​ ​South​ ​Asian​ ​writing​ ​is​ ​unique​ ​in​ ​the​ ​sense​ ​that​ ​it​ ​is​ ​not​ ​ethnicity​ ​driven​ ​in terms of the author’s origin and is open to any author belonging to any part of the globe as long as the work is based on the South Asian region and its people. The past winners have been from various countries​ ​and​ ​their​ ​work​ ​has​ ​reflected​ ​the​ ​importance​ ​of​ ​South​ ​Asian​ ​culture​ ​and​ ​literature.

Congratulating the winner, ​Surina Narula, MBE and co-founder of the DSC Prize​ said​,“My heartfelt congratulations to Anuk Arudpragasam for winning the DSC Prize for South Asian Literature 2017. This year the shortlisted novels were all equally exciting with diverse subjects which brought out the nuances and the changing dynamics in South Asian life in a unique and evocative way. It must have been a tough task for the jury members to choose from these five exceptional contenders and arrive at the eventual winner. We are honoured to be invited to give the award this year in Bangladesh. The DSC Prize has now completed seven successful years, and it remains focused on recognizing and showcasing the immense talent writing about​ ​the​ ​South​ ​Asian​ ​region​ ​and​ ​bringing​ ​it​ ​to​ ​a​ ​larger​ ​global​ ​audience.”

The DSC Prize for South Asian Literature 2017 was judged by a diverse and distinguished five member jury panel comprising eminent figures drawn from the international literary fraternity who have worked in or around South Asian literature and issues. This year’s international jury panel included ​Ritu Menon​, Jury Chair and eminent feminist writer who has commented on a wide range of gender issues affecting the South Asian region, ​Valentine Cunningham​, Professor Emeritus of English language and Literature at Oxford University, UK who has authored several books on Victorian fiction and poetry, ​Steven Bernstein​, celebrated screenwriter, director, author, cinematographer and lecturer based out of Los Angeles, USA, Yasmin Alibhai-Brown​, respected journalist, pundit, radio and television broadcaster, based in London who has written extensively on society, culture and feminism, and ​Senath Walter Perera​, Senior Professor in English, University of Peradeniya, Sri Lanka who has authored several publications on the diasporic and postcolonial​ ​literature​ ​of​ ​the​ ​region.