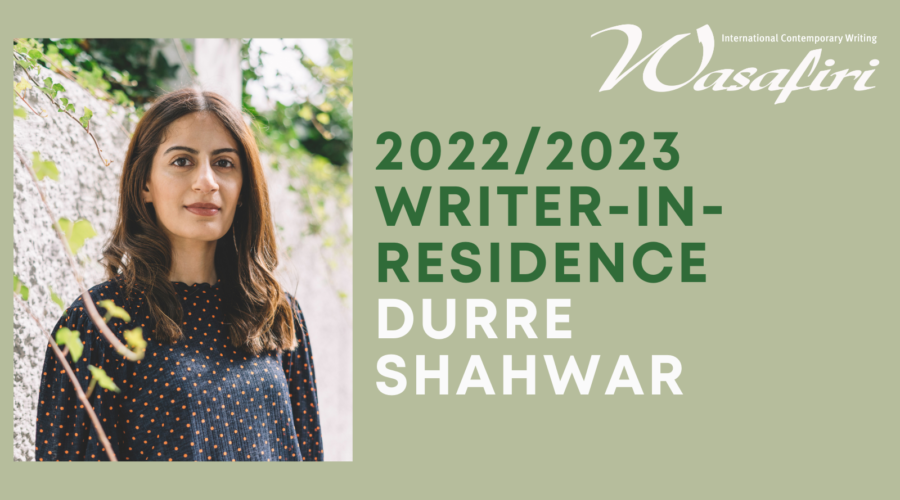 We’re delighted to announce the appointment of our new Writer-in-Residence, writer and academic Durre Shahwar.

For over three decades, we have created a dynamic platform for mapping new landscapes in contemporary international writing, featuring a diverse range of voices from across the UK and beyond. In the spirit of the magazine, during her six-month residency at Wasafiri, Durre Shahwar will curate and host various in-person and online writing workshops and events, as well as creating her own works for publication with Wasafiri. Keep an eye on our Twitter and Instagram for more details on these upcoming workshops, events, and publications.

This follows on from last year’s successful appointment of the writer and climate justice activist, Jessica Gaitán Johannesson, who led a brilliant series of writing workshops on the climate emergency and writing as activism, online and in Edinburgh. Jessica Gaitán Johannesson’s tenure was preceded by poet, translator, and critic Jennifer Wong – who curated a new online festival celebrating Chinese diaspora poets, Poetics of Home – and Nick Makoha in 2019, who appeared at national and international literary festivals – from Birmingham to Berlin – and conducted writing workshops on behalf of Wasafiri in our 35th anniversary year. Before Nick, the writer, presenter, film maker and poet Bidisha served as our first-ever Writer-in-Residence in 2018.

Commenting on her appointment, Durre Shahwar said: ‘I’m thrilled and honoured to be a Wasafiri Writer-in-Residence. I have been an avid follower of the magazine for a long time and admire their dedication to supporting and platforming writers on a local as well as an international level. My approach to the residency will weave together creativity, theory, craft, and the personal story to question mainstream genre conventions and their suitability for certain narratives. I’m looking forward to working with the Wasafiri team to create new work, hold workshops, and expand this conversation to include new audiences as well as existing ones.’

Wasafiri’s Editor and Publishing Director, Emily Mercer said: ‘We’re so pleased to partner with Durre, whose inspring work on and off the page has moved from strength to strength. Her workshops, online and in Cardiff, promise to be accessible, nurturing spaces, and her background in performance – including founding an open mic collective – will bring something new to this role. I can’t wait to see what she creates this year.’

Durre Shahwar is a writer and AHRC-funded PhD Candidate in Creative Writing at Cardiff University. She is the co-editor of Gathering, an essay anthology of nature writing by women of colour (forthcoming 2024 with 404 Ink) and also the co-editor of Just So You Know (Parthian Books, 2020). Her work has appeared in Wasafiri, Know Your Place: Essays on the Working Class (Dead Ink Books), We Shall Fight Until We Win (404 Ink), Welsh (Plural) (Repeater Books). Durre is the co-founder of ‘Where I’m Coming From’, an open mic collective that platformed underrepresented writers in Wales. She is currently a Future Wales Fellow, looking at the impact of climate change on everyday life through writing and art. Durre is working on her first book of narrative non-fiction about language, belonging, and identity as a Pakistani-Welsh person, a sample of which was shortlisted and highly commended for the Morley Lit Prize 2022.