‘Everyone of us is born into a place in the world, in a culture, and it is from the standpoint of that culture that we contribute to the world’
Earl Lovelace, Wasafiri

Its name stems from the Kiswahili word for ‘travellers’ which reflects the magazine’s longstanding engagement with cultural travelling, diverse histories and its continuing commitment to extending the established boundaries of literary culture. Brainchild of Founding Editor, Susheila Nasta, the first issue was launched at the University of Kent in 1984. One of its inaugural aims was to provide much needed literary and critical coverage of writers from African, Caribbean, Asian and Black British backgrounds who often struggled to get adequate attention in the mainstream press. The magazine played a pioneering role in reviewing the first novels and early poetry of writers who are now well-known, challenging the predominant assumption that their work would only be of ‘minority interest’. 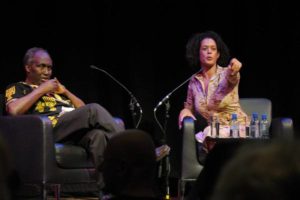 Wasafiri remains wedded to the unbounded vision of writing across worlds with which it began. Having pioneered a shift in the literary, cultural and critical landscape, the magazine draws widely across modern culture and the arts, publishing a lively and informed mix of fiction, poetry, interviews, essays and reviews. In today’s increasingly divided world, the magazine’s original mission to provoke cross-cultural dialogue and provide a space for the publication of distinctive new work from across the globe is ever more vital. Continuing to introduce readers to the best in international writing and committed to promoting the freshest talents, it opens spaces for reading and writing across borders, imagining diverse possibilities for belonging.

Listen to Susheila Nasta speak about the history of Wasafiri at Queen Mary University of London’s ‘Show and Tell’.

Wasafiri is proudly supported by: